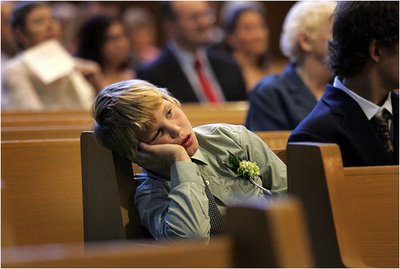 An article denigrating the so-called “reform of the reform” movement recently appeared in Commonweal. In it, Michael H. Marchal argued that it is not new liturgical practices that are to blame for a decline in liturgical enthusiasm, but a lack of zeal, grace and “style” in their implementation. A return to the “pieties” of the older form, he argued, would be disastrous for the Church.

What the proponents of the New Mass gloss over is precisely the experience of the generation growing up with the New Mass — which has largely been to leave it. Only 34% Catholics ages 18-29 attend Mass on a weekly basis. This mirrors an overall decline in American Mass attendance that followed the Council. The Pew Research Center reported that “the share of all Catholics who say they attend Mass at least once a week has dropped from 47% in 1974 to 24% in 2012; among “strong” Catholics, it has fallen more than 30 points, from 85% in 1974 to 53%.”

While there are many factors contributing to this exodus from the liturgy — secularization and sex-abuse scandals chief among them — one thing is rather clear: We did not leave an empire of rubrical, sacrament-dispensing machines deflecting active participation by their liturgically cold shoulders and scholastic nitpicking. Only complete fantasy could call this the experience of the 80’s, 90’s and 2000’s. The average parish, suburban or urban, has, for as long as my 23-year-old memory allows, expressed the virtues the authors extol: Pastoral ministry, non-clerical involvement, the face towards the people, the basic attempt to interest, invite, and so forth. This, and no darksome Tridentine liturgy, was the liturgy my generation ditched.

So it is bemusing to read Michael H. Marchal advocating for what appears to him as a deeper revolution, but to me as a dogmatic hammering of the status quo: “We need bakers who bake, readers who proclaim and don’t just recite, ministers who move with style and grace, presiders who are truly leaders of prayer.” It is a “better performance” that will set a fire within the belly of the Church: “I always pay attention…to how the priest “performs” the dialogue that begins the eucharistic prayer. When he says lift up your hearts, is he making eye contact?”

Now my generation is no arbiter of taste, and certainly not of liturgical value. Our boredom with the so-called New Mass does not discredit it. We could be wrong, stupid, heartless, or otherwise incapable of being penetrated by its profundity. But it is equally true, though an older generation does enjoy the changes, they could be wrong. Insofar as Marchal is begging for a deeper reverence from priests — who could discredit him? But he advocates something else, namely, an engaging performance, summed up in his demand for eye-contact from the priest.
This expectation could serve as an icon for the entire, tragic incapacity of the “performance” to attract to itself a faithful population. To desire that a priest make eye contact with his flock is the desire that he ascend to the status of some minor god and achieve the impossible — no human being can make eye contact with a group. It is a physical impossibility conditioned by only having one gaze to give at any given time. To make eye contact with one parishioner is, by definition, to exclude the rest.

Eye contact is certainly a primal experience of communion, but always expresses a one-to-one, eye-to-eye, and personalized relationship. This is what makes it a joy of erotic communion — it isolates the world, saying “thou, and thou alone.” But the liturgy is the worship of all God’s people; of the Church; of the One Body of Christ dancing for joy as she gazes upon the living God. To expect to be lifted into a realization of this mystical reality by virtue of being individually “looked at” is to misapply the mode in which we actively participate in a performance — by being “called out,” “spotlit,” and “personally invited” — with the mode in which we actively participate in worship — as one body.

Precisely by accentuating the individualized involvement, we lose the sense of communal involvement, in which the one bride of Christ petitions, adores, and communicates with the Creator in and through every particular Church. Precisely by seeking an impossible eye-contact from a finite human being, we forget the audacious attempt of the Bride to attain eye-contact with the only person who gazes into the eyes of an entire community without excluding or negating its members — God.

It is a sad one, but have the experience of a young Catholic: The attempt to involve everyone left everyone feeling uninvolved. By lowering the priest from the status of sacrament-dispensary, we raised him to the status of M.C. If, in the former clericalism, the faithful felt that they were unimportant, in this new clericalism, the faithful feel awkward. The performing priest embarrasses the young in his attempts to involve them, precisely because this involvement is an individualizing involvement which breaks the person from the experience of communal worship. A priest can only “single you out” in a moment of eye-contact. If he moves with “style and grace” he singles you out once more — as an aesthetic judge of his style.

He individualizes the community by his individual performance, and thus the post-Mass conversations of suburban parishes express anything but the singular Bride: “It’s just not my style to have him ask us to raise our hands during the homily.” “Wasn’t it wonderful how the reader did all the voices of the apostles?” “I found the whole thing distracting.”

Marchal seems to think that “the personality of the ministers, which comes through the interactions with the assembly” will serve as “a means of disclosing Christ’s presence at work within them.” And perhaps they do, in the mind of those who see the New Mass in contradistinction to the old, enjoying the expression of a person who previously “hid” his face. But for my generation, who does not compare and contrast, but simply sees the New Mass as the Mass, it is difficult to pretend that an excess of ministerial personality is not simply another movement of individualization — a performance in which a leader gets to express him or herself while a crowd watches and (inevitably) judges the performance on the basis of taste.

We grew up in the age of the personalized liturgy. We have seen its fruits: Rare are the moments of profundity, rarer still any invitations into the central mysteries of the faith. Ordinary and ornery are the bad jokes, the violent attempts at relevance, and the phoney milking of every Catholic buzzword for its last drop of deep, holy significance. We are a nation of suburban parishes stewing with cults of personality, petty ego trips of vain ministers and the gossip of judgmental congregations. The personal styles of our ministers are as often tyrannical, theatrical, and frivolous as they are reverent. Perhaps we should be a little more pessimistic about our broken and being-redeemed “personalities” before we hire them out as the means of manifesting the spotless Lamb. Perhaps we should consider our priest in a less adulatory light and consider at a least one benefit of his facing East with the people — he is in no danger of being treated as a god, and his congregation is in no danger of being treated as an evaluating public.

Clericalism is not defeated by transfiguring the priest into a spectacle any more than communion is established by turning a congregation into an “interested” crowd. These intertwined perversions are cast out when the “personalities” of priest and people are, by a great mercy, joined to the person of Christ, who alone is worthy beyond all judgments of taste. Ad orientem educates in this unseeing. Our eyes do not rest on the priest as the object of our attention, and our participation does not depend on his performance as the source of our simulation. Our worldly eyes are (often painfully) replaced with icon-eyes: We see through the priest to the Christ that he gazes upon. We are freed from the easy idolization of personality. Personality — brilliant or crusty as it may be — is hidden in the person of Christ whom priest and people commonly face.

The liturgy will not be saved by becoming a better performance, because, considered as a performance, the liturgy is relatively lame. Even the most grotesque attempts to make the liturgy exciting, from roller-skating clergy to Beatles-infused offertory hymns, end up boring. An animated reader has a banal sort of novelty to it — again, depending on your individual taste — but it hardly compares to Netflix. Trying to milk an exciting experience from the given liturgical rubrics is an exercise in futility, ending in those strained aesthetic modes of trying-to-hard and ending-up-awkward.

This is as it should be: The Liturgy does not engage us as the world engages us, and if we ignore this fact, the world will win every time, as it has won over my generation.

The Liturgy is not a performance participated in by individualizing moments, nor an expression of priestly and ministerial personality which may or may not “click” with the “crowd.” It is a “feast of faith” participated in by leaving behind the vain and petty ego and joining the great ecclesial ”we.” What it offers is not the individualizing performance but genuine communion. It is a rebellion against the basic American-capitalistic values of individualism, self-expression, and power. It is a turn towards the values of charity — the loss of self and the adoration of God. This is the source of attraction to the ill-titled “reform of the reform” among my generation, that, often for the first time, we find ourselves going to Mass, not to watch something, but to be a part of something, not to be catered to, but to drop the preferences of the ego and take up the preferences of the Bride of Christ, whose concern is not for wearily wrung visuals, but for salvation and unity of all the world.

ChurchculturedisciplineeducationMassMillennialprayerTraditionyouth
11 / 10 / 2016
Back to all articles

Temperance is More than Self-Denial and Moderation