Resist the Temptation to “Come Down from the Cross” 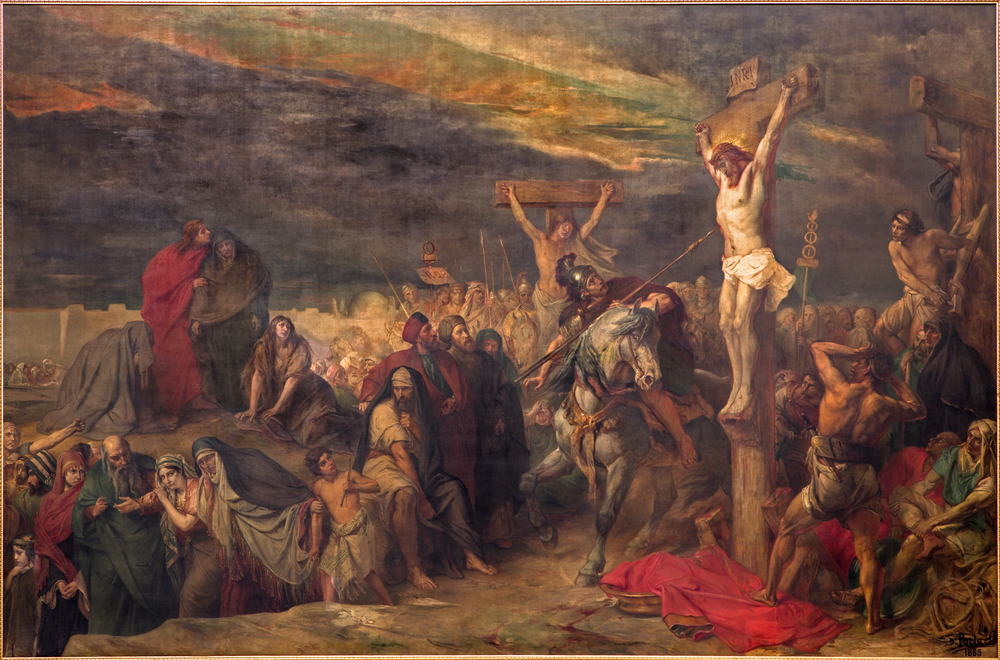 In the time of Easter there is a temptation to leave all the fruits of Lent behind, growing lax and celebrating too heartily. It is important, therefore, to ask: what is the continuity between Lent and Easter? One essential link that I would like to explore is that the Resurrection, the triumph and transformation of our lives, is only possible after having passed through trial, suffering, purification, and ultimately even death.

Trying to pass to the Resurrection without the Cross actually constitutes a serious temptation, one which manifests itself to us in many ways, some unsuspecting. This serious temptation to the Christian life was experienced by Christ himself. Mark the Evangelist links the public pronouncement of Christ’s reign as the Messiah by Pilate to the reaction of those who scoffed him. If He is the Messiah then he should avoid the Cross and enter immediately into His reign:

It was nine o’clock in the morning when they crucified him. The inscription of the charge against him read, “The King of the Jews.” And with him they crucified two bandits, one on his right and one on his left. Those who passed by derided him, shaking their heads and saying, “Aha! You who would destroy the temple and build it in three days, save yourself, and come down from the cross!” In the same way the chief priests, along with the scribes, were also mocking him among themselves and saying, “He saved others; he cannot save himself. Let the Messiah, the King of Israel, come down from the cross now, so that we may see and believe.” Those who were crucified with him also taunted him (Mk 15:25-32).

Christ mounts His throne and the public proclamation of Kingship is finally unfurled. He is attended on his right and his left. His subjects stand around His throne. These subjects largely, however, cannot understand the nature of His Kingship (the Good Thief is a wonderful exception, beyond his disciples, as he prays to enter Christ’s Kingdom). They are scandalized by a suffering Messiah and demand that Christ prove His Kingship by coming down from the Cross—abandoning His suffering and priestly self-offering.

The accusation about destroying the Temple is pertinent in particular. The Temple must be destroyed to be rebuilt in a new way. This Temple will not be in Jerusalem (as Christ tells the Samaritan woman in John 4), but will be linked to the restored humanity of Christ’s Resurrection. The new Temple is Christ’s resurrected body, which will be mirrored in our bodies even before our own resurrection: “Or do you not know that your body is a temple of the Holy Spirit within you, which you have from God, and that you are not your own?  For you were bought with a price; therefore glorify God in your body” (1 Cor 6:19-20). Even now we reap the fruits of Christ’s sacrifice of His Body (the price he paid for us), which constitutes us – the members of His Resurrected Body – as the new Temple.

Christ’s reign of glory comes precisely through His embrace of weakness and suffering, that the old humanity may die and a new one may be reborn. To reject the Passion is to reject the path to the Resurrection. The latter cannot happen without the former.

The temptation put before Christ to come down from the Cross is one all Christians must face as well.  We must suffer with Christ in order to reign with him.

First, we should look back to Lent not as a necessary past stage that enables us to celebrate the Easter season and its feasting with a free conscience. Rather, self-sacrifice and penance are continuing conditions to embrace a resurrected life. We focus on Christ’s suffering in Lent, uniting ourselves to it, so that we will be able to unite ourselves to His Resurrection. Paul makes clear that the two go together: “For if we have been united with him in a death like his, we will certainly be united with him in a resurrection like his” (Rom 5:6). This conformity to Christ’s Death and Resurrection occurs mystically in Baptism, though it must be lived out in the Christian life. This is why we have the opportunity to enter into the mysteries of Christ’s life in the liturgical year, which, as Bl. Columba Marmion teaches us, conform us to our Lord:

The mysteries of Christ are ours; the union that Jesus Christ wishes to contract with us is one in which everything He has becomes ours. With a divine liberality, He wants us to share in the inexhaustible graces of salvation and sanctification that He has merited for us by each of His mysteries, so as to communicate to us the spirit of His states and thus to bring about in each of us a resemblance to Him (Christ in His Mysteries, Zaccheus Press, 41).

The key point is that our conformity to both Christ’s Passion and Resurrection exist side by side in our lives. We cannot move beyond our Lenten penance, because the old man must constantly be put to death in us so that Christ can live in us. This is why every Friday is a day of penance, even in the Easter season (outside of the Easter Octave).

Second, we can apply this principle more broadly. What are our own temptations to come down from the Cross? We have to decisively reject a health and wealth gospel that thinks that being a Christian means that God will reward us with earthly consolations and even luxury. This is not the way of Cross that Christ calls us to follow. We also have to resist the popular temptation to blame God for suffering. Suffering is only a result of sin (stemming originally from the Fall) and in God’s providence it serves as something that points us to God. Suffering is a sign that we are not made for this world, that all will only be set right when Christ comes again.

Suffering, furthermore, serves a path we must embrace so that we can follow Christ in laying down our life. Christ calls us to share in His Kingdom, but it is a Kingdom inaugurated on the Cross, and we share in Christ’s kingship when we embrace our trials and sufferings in charity, for our own purification in reparation for sin. Suffering tries us and when accepted, it should lead to endurance: “The saying is sure: If we have died with him, we will also live with him; if we endure, we will also reign with him; if we deny him, he will also deny us” (2 Tim 2:12). And yet, it is so easy in our culture which seeks comfort and prosperity above all us to see suffering as a sign of God’s disfavor or absence.

I hear from so many people, especially my students, that they stopped believing when some trial emerged in their life. Ironically, it is only through trials and tribulations that we can prepare ourselves to enter the Wedding Feast of the Lamb. Paul made this clear to his new disciples in Acts, telling them that “it is through many persecutions that we must enter the kingdom of God” (Acts 14:22). Why? The masters of the spiritual life tell us that our soul must undergo purification from its attachments so that we can live primarily for God. We must endure a purification (or dark night) of the senses and then of the soul so that we no longer live by and for the consolations of this life (sensual or even spiritual), but live in absolute abandonment to God. Our attachment to our own self has to be stripped down through suffering so that we can say “I have been crucified with Christ and it is no longer I who live, but it is Christ who lives in me” (Gal 2:20).

Many events in our life will cry out to us, tempting us: “come down from the Cross.” We have to reject this temptation and commit to following the Crucified King, embracing our suffering as a small way of taking up our own cross, and following the path that will lead to resurrected glory.

EasterlentresurrectionsufferingThe Cross
04 / 06 / 2016
Back to all articles

They scarcely waked before they slept… The Holy Innocents