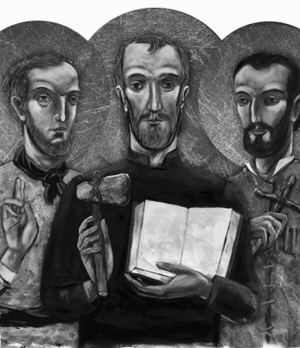 Most often when an American thinks of the Founding Fathers names such as Thomas Jefferson, Benjamin Franklin, or George Washington are the first to be considered. And indeed, they are the true Founders of the American Republic in which the Constitution and ideals of endowed rights of the individual coming from God were written into law. However, in 1636, a different type of American Father was in the process of becoming the seedbed by which the ideals of Christianity would then permeate the North American settlement. These Fathers were similar in a way to those of the governmental Fathers, in that they were learned men with dreams of creating something new, something the world had never seen before. They also believed in the inalienable rights of mankind to pursue happiness, though they understood happiness under the flagship of Christian freedom, where a relationship with Christ and an acceptance of the forgiveness and salvation he offers is true happiness. They also desired to free a people from tyranny, a tyrannical ruler which devours its prey from within an individual rather than from without. Indeed, these men understood that no matter the race, color, or background, all men, women, and children, have the right to hear the Gospel of Jesus Christ proclaimed and be given the opportunity to embrace such a life. Inspired by Christ’s call to bring his message to the world, Fr. Isaac Jogues and Fr. Jean de Brebeuf gave their lives in service to the love of their neighbor.

Both Jogues and de Brebeuf were French Jesuits during the time of the founding of the New World. Fr. Isaac, under the leadership of John de Brebeuf, was sent with several companions to the Canadian settlement in Quebec where he was charged with the evangelization and catechesis of the Iroquois, Huron’s, and other Native American tribes. Though many of these tribes were at war with one another, Jogues saw no difference between the children of God. Within just a few years Fr. Jogues was imprisoned by the Iroquois tribe, where he was beaten and tortured but not yet killed. After about a year’s worth of hard labor and imprisonment, he had a chance to escape through a Dutch trading vessel. After arriving in France with hands that had been mutilated by burning, chewing or cutting off fingers, Pope Urban II gave him a special dispensation to say Mass even though he couldn’t hold up the Host. Out of love of the Native Americans Fr. Jogues begged to be sent back to Canada so that he could continue his mission of salvation and love. Eventually, a Mohawk tribe caught Fr. Isaac and killed him by a tomahawk to the head.

Fr. Jean de Brebeuf spent near 24 years in Canada catechizing and baptizing the Indians. It is said that he saw the conversion of over 7,000 people during his time there. Though he also had a chance to go back to France after the English overtook Quebec, he decided to stay. Unfortunately, there was a smallpox breakout among the Native people and they thought that it was happening because of the priests. Fr. Jean and his companions were imprisoned and tortured. Fr. Jean was tortured for over four hours, including fire-branding, cutting, and being beaten by clubs. His companions, Fr. Anthony Daniel, who was set on fire, Fr. Garnier, who was shot while baptizing infants, and Gabriel Lalemant who was also tortured, along with three other companions gave their lives to a higher cause than many understand.

Eight men, eight spiritual fathers, who heard Christ’s call to witness to the Gospel to all men, spilled their blood for love of another. These eight men were canonized in 1930 as the first North American Martyrs to be officially recognized by the Church. The American settlement owes these men a great deal, for the saying is true: The blood of the martyrs is the seed of the Church.

So, then, how do we honor the memories and legacy of these great men? We take the helm for the New Evangelization, which in large part is a reigniting of the spirit of these profound men. The Church is asking men today to become heroic martyrs for the message and love of Christ. Our territory is here. Our mission is our next door neighbor. Jogues, Brebeuf, their companions gave their lives so that this country could experience and embrace the love of Christ Jesus. We owe them the action of following through with their desire. As we continue seeing our beloved nation fall away from God or any sense of morality, it is in light of these men that we can see what must be done. Certainly the majority of us won’t face down a torturous death; however we can all embrace the death to self that Christ asks of us. The day in, day out willingness to spread the Gospel and discipline ourselves in the model of Christ crucified. Imagine for just a moment those last seconds of their lives and the immense joy and love they held in their heart for those who would mean them harm. Imagine that, staring death in the face with a smile! That’s freedom, that’s happiness.

So, indeed, we have a legacy to continue. I most certainly admire and look up to men like George Washington; in fact, I’ve read numerous biographies and his speeches several times. But the fact remains that it is lives like the North American martyrs which will maintain any sense of the transcendent in this world. I know that those brave men are looking down to each one of us in their beloved New World and cheering us on as we continue their mission. To end, let me share a quote from St. John Paul the Great, who, as he spoke to the Bishops of Ontario, encouraged all the faithful to follow in these great men’s footsteps: “We can no longer expect people to come to our communities spontaneously: there must be instead a new missionary outreach in the cities, with dedicated men and women, and young people, going forth in Christ’s name to invite people into the community of the Church. This is a crucial element … which a new evangelization of the cities will require. It will be a new surge of the same energy which brought the Church to birth in [Canada]: the heroic outreach of Jean de Brébeuf and Isaac Jogues, Marguerite Bourgeoys and Marguerite d’Youville. But the frontier now is the city, and it is there that the new missionary heroism must shine no less brightly than it did in other ways in the past.”

Jared Zimmerer is a best-selling author, speaker, blogger, husband and father of 5 children. He is the founder of Strength for the Kingdom, a ministry promoting men’s growth in virtue, knowledge of the Catholic faith, and the understanding of authentic masculinity through physical endeavors. He lives in Roanoke, TX and holds a bachelor’s degree in Kinesiology. He is currently working towards a Master’s in Theology with a Apologetics focus at Holy Apostles College and Seminary where he won a full scholarship on the Alumni’s New Evangelization program.

He currently works at St. Francis of Assisi Catholic Church in Grapevine, TX as the Director of Adult Catechesis and Evangelization and has been there for three years. He spent a year working with TOBET, Theology of the Body Evangelization Team in Irving, Texas, and has been a competitive all-natural bodybuilder for 15 years.

He is the lead author of the best-selling book: Man Up! Becoming the New Catholic Renaissance Man, which discusses authentic Catholic manliness.

His first book is called The Ten Commandments of Lifting Weights: Recommendations to the Devout Body Builder, and he has been interviewed on Catholic radio programs, EWTN television and other outlets around the country. He has given presentations around the country on fitness, health, masculinity and virtue, including Mundelein Seminary, where he was invited by Fr. Robert Barron. He is a team member of Word on Fire Catholic Ministries and has travelled the world with Bishop Robert Barron.

The Christian Art of Letter Writing