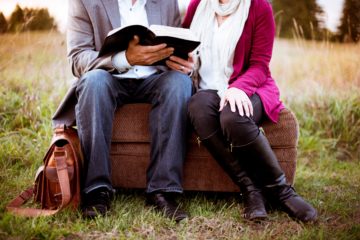 If you clicked on this article because you thought you had stumbled onto a list of “silver bullet” ideas for easily evangelizing your friends, co-workers, and family members, I am sorry to say you are going to be disappointed. When it comes to living and sharing our Catholic faith, there is no “easy” way to do it. The martyrs who died for the faith and the missionaries who fearlessly took it to all corners of the globe did not do it because it was “easy.” Neither should we. But though it may not be easy, evangelization can be very simple.
The title of this post was nearly “Three Painless Ways for Men to Evangelize,” but after some reflection the suggestions below aren’t really painless ideas. They do involve a little bit of pain, headache, and inconvenience, because that is what it takes bring Christ to others. That is what countless missionaries and martyrs endured; that is what it takes (and then some) to become a saint.

When we think or talk about the concept of evangelization, we tend to only consider evangelizing those who do not share in our Catholic faith. While it is imperative for us to evangelize non-Catholics, we must resist the tendancy towards a binary view of the world composed of those who have already been evangelized and those who need to be evangelized. These categories are too broad. In reality, the person in the pew next to you at Mass on Sunday may need to be evangelized just as much as someone who has never set foot in a Catholic church.

Statistics bear this out. Lapsed Catholics make up one of the largest religious group in the country, 13 percent, according to a 2015 Pew Forum report, compared to 20 percent who do identify as Catholic and 23 percent who do not affiliate with a religion at all (known as the “nones”).

Another shocking statistic comes from the Center for Applied Research in the Aposolate (CARA) at Georgetown University which found that less than half of Catholics are aware of the Church’s teaching on the Real Presence in the Eucharist and believe in it. About one-third of Catholics are completely unaware and do not believe.
These statistics paint a bleak picture of Catholicism in America.

In his book, The Four Signs of A Dynamic Catholic, Matthew Kelly writes the following in a section specifically on evangelization:

“Too often when we talk about Evangelization in the Catholic Church we are asking people who have not been sufficiently won and built to go out into the world on a mission, and they are simply not ready. Most Catholics don’t evangelize because they don’t actually believe that Catholicism is a superior way of life. So why would they want to share it? They have not been won. Until we are won, we don’t have the passion, that fire in our belly, to attract anyone else – and Christianty only genuinely grows through attraction.”

In other words, many of the people, especially men, at Mass every week are not well formed in their faith and need to be fed. This could even be you. If so, Deo Gratias! By visiting Those Catholic Men and reading this article and others you realize the need to grow in your faith, and you are doing something about it. On the other hand, if you’re a man of strong faith, desiring to share it with others, these ideas can help you too.

With all that in mind, it seems we need some ideas for evangelizing that not only bring the faith to others, but increase the passion and fervor in our own lives. So, whether you are a devout brown-scapular-wearing-Latin-Mass-going-cradle-Catholic, a brand-new convert, or something in-between, consider these three ideas for evangelizing others and deepening your own faith:

An ancient historian, Hegesippus, wrote the following about St. James the Less, one of the apostles and first bishop of Jerusalem:

Remember the line above about these ideas not being painless? Very simply, this is not a painless idea. This suggestion might even sound crazy, though some commentators have gone even further and argue for the removal of pews from Catholic churches altogether. In reality not using a kneeler is not always practical (like when you are kneeling next to your wife at Mass, or in a crowded church), but in those times when you can avoid using a kneeler (what I affectionately refer to as “knee pillows”), the minuscule amount of pain and discomfort you will experience can be a tremendous method of increasing your devotion. And it does not matter what the flooring is – carpet, wood, or even marble – you can still kneel directly on the floor. You will find it painful at first, but over time your knees will develop callouses, just like St. James, and it will become less painful. The point, though, is not to enjoy the pain, or to bring attention to yourself. Rather, the point is to unite this small act of suffering with Christ, thereby increasing your devotion. Someone will probably take notice, and it might only be your children, your wife, or the old man right behind you at daily Mass, but again, that’s not the point. Remember what Matthew Kelly said: if you don’t have passion, you will not attract anyone else. Eschewing kneelers will increase your passion, and your faith overall will start to become more attractive to others.

2) Receive communion on the tongue only

Like the first suggestion, this is intended primarily to increase your own devotion. If you have attended the Tridentine Mass, also known as the Extraordinary Form, you know that Holy Communion is always distributed kneeling and on the tongue, which is actually the Church’s preferred method. Since Vatican II, permission has been granted by the Church for reception of Holy Communion in the hand. A recent National Catholic Register blog post stated:

“[E]ven within the boundaries of the current discipline, the Church has made clear that Communion on the tongue is the preferred practice… The Church’s preference for Communion on the tongue is nearly always justified by notions of reverence, devotion, humility, respect, adoration, and decorum. And while Pope John Paul II acknowledges those “who, receiving the Lord Jesus in the hand, do so with profound reverence and devotion” (Dominicae Cenae 11), permission for Communion in the hand is accompanied by warnings of potential disrespect, profanation, weakening of Eucharistic faith, and indifference.”

As with infants who must rely on adults to feed them because they cannot feed themselves, when we receive communion on the tongue it is a tacit acknowledgement that we are children of God, unable to gain salvation on our own, and humbly reliant on God’s mercy and providence.
In addition, you may also consider a reverent genuflection, rather than a solemn bow, prior to receiving the Host. This calls to mind the words of scripture “That in the name of Jesus every knee should bow.” Historically, the knee was a sign of one’s strength, for standing is only possible with healthy knees. In battle, soldiers were taught to take out an enemy’s knees to incapacitate him. This is why it became common to kneel before a king or sovereign as a sign of humility, and why we still do when crossing in front of the tabernacle. Jesus Christ, being the King of Kings and Lord of Lords, deserves our utmost adoration, which is why we should kneel as we approach Him, especially at Holy Communion.
Receiving communion on the tongue may not seem like a way to evangelize, but again, by increasing your own devotion in this way, your faith will become attractive to others. It is worth repeating that neither your reception of communion nor giving up kneelers should be a way of drawing attention to yourself. Do these things out of love and devotion, and if people notice, then thanks be to God!

One of the best (and most needed) ways to evangelize is by teaching the faith to others. Like the first two suggestions, this will increase your devotion as you delve more deeply and attentively into the faith (when done with the right attitude), but unlike the first two, that is not the primary focus. Evangelization is often thought of as something where we have to go “out” and find people to evangelize. Well, by teaching a religion class at your parish, the very people who you want to reach come to you! Whether it’s grade school CCD/PSR, adult RCIA, or even a youth/young adult group, there are people ready and willing to learn more about the Catholic faith, and more than likely your parish needs someone, especially men, to step up and fill these roles. You will undoubtedly be presented with questions you were not prepared for, and have to learn aspects of the faith you did not know or re-learn things you forgot about. Students will give you a headache (remember, these are not painless suggestions) as you try to get their attention after they already spent a long day of school.

Just remember, whether it’s through your own devotion, your reverence for Christ, or in the way you teach, if you make the faith attractive to others, they will be more likely to believe it.