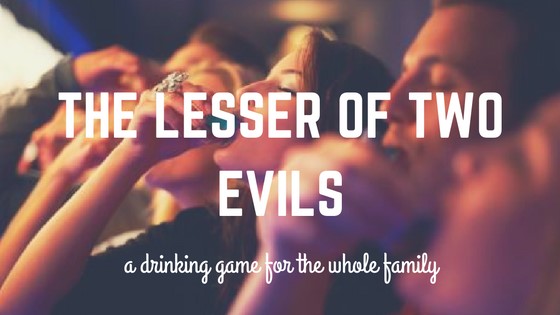 It’s been a complaint of that small but admirably spunky demographic of Christians Who Care About Being Christian that, every election, we are forced to pick between the lesser of two evil candidates. This, at least, is the rallying cry of the oddly unconflicted pro-Trump Christian pie-slice, who cry — now on sidewalks, now on Facebook — that we must prevent Hilary from ascending to her murderous throne. A non-vote or a third-party vote, the logic goes, is just a vote for her.

This got me thinking: What if voting for the lesser of two evils is all we can do, from this election unto the Apocalypse? Would society be benefited? Would it allow a Christian to sleep easily at night, knowing that he is doing his part to build up the Kingdom of Heaven by sanctifying the political structures of man through his charitable participation in the life of the polis?

Now every family, ages 8+, can find out for themselves! That’s right gamers, it’s here, The Lesser of Two Evils Board Game, available wherever the Best Games TM are sold! Cancel your anniversary date with Deborah, ground the kids, clear out some space in your federally subsidized home, invite your neighbors, and get ready to play… 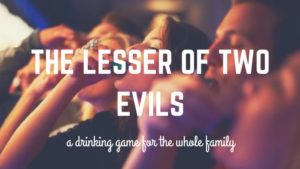 Problems With the Game

Obviously, what this game lacks is the influence of the good. The presence of a good candidate, who lessens the evil-level of the populace by a positive example of virtue, could reverse the slow addition of evil. But this, I would argue, is precisely what is lacking in the normative command to just pick the lesser of two evils without any consideration of a third-party vote –without any consideration of voting for a positive good rather than voting to avoid a Catastrophic Evil.

Another problem is that the game assumes that the people going into politics never convert, become better, or enter the community of possible-leaders under the influence of some moral force outside of the force of the current political leader. Why not have one of your 20-something person society grow up the righteous bosom of the Holy Church, and through that influence, resists the evil influence of the political leader, entering into politics as a level-2 evil person, even when the average evil of the Senate-community is something 64?

While I admit that the game is an idealized exercise, and does not take account of these possible exceptions, this seems largely in accordance with the fact that the political community feeds itself. The reasons politicians seem horribly alike is simple: They have seen negative campaigns win, so they practice negative campaigns. They have seen apocalyptic rhetoric win, so they use apocalyptic rhetoric. Those who enter the sphere of possible-leaders are almost inevitably those people who can act (in both presentation and policy) enough like the previous victorious leaders in order to gain for themselves a victory. Reformers are rare because real reformers rarely win. If the dearth of any viable third-party options is any indication, the American public will largely vote for those that they expect to win, and not those who they believe are virtuous and/or have good ideas. All of this results in the following situation, that the realistic list of possible leaders is largely closed off to candidates who do not conform to the basic levels of moral rectitude exhibited by the most recent victors. Whether this is a situation natural to a democracy, I leave to the gamer’s reflection, but for now, it is enough to point out that I do not believe a closed group of people growing gradually more despicable in accordance with the victories of increasingly despicable leaders is an unrealistic description of our political situation.

Hopefully this comes up in your inebriated discussions, but the moral of the game is this: The moral imperative to vote for the lesser of two evils may be a valid response to the last election in the world, but it becomes a shaky response over a series of elections.

The rhetoric of our current election makes us think that this is the end of the world. One must vote against a looming liberal/conservative Hell, and do it now. We are frightened away from taking the time (and political losses) required to establish a party that genuinely reflects the demands of the moral life. There is no time to be good, the logic goes — there is only enough time to be less-evil.

Christians wonder why, once again, we seem to be faced with two unappealing choices — this game is supposed to show that only ever choosing the lesser of two evils guarantees this situation. I hope that, at some point, the two evils we must choose between will become so obviously horrible, that we’ll muster up the courage to engage in political revolution, sanctifying a broken structure by charitable participation, running as and voting for and losing as individuals and third (and fourth) parties seeking to establish a genuine common good.