Sanctifying the Day with the Angelus 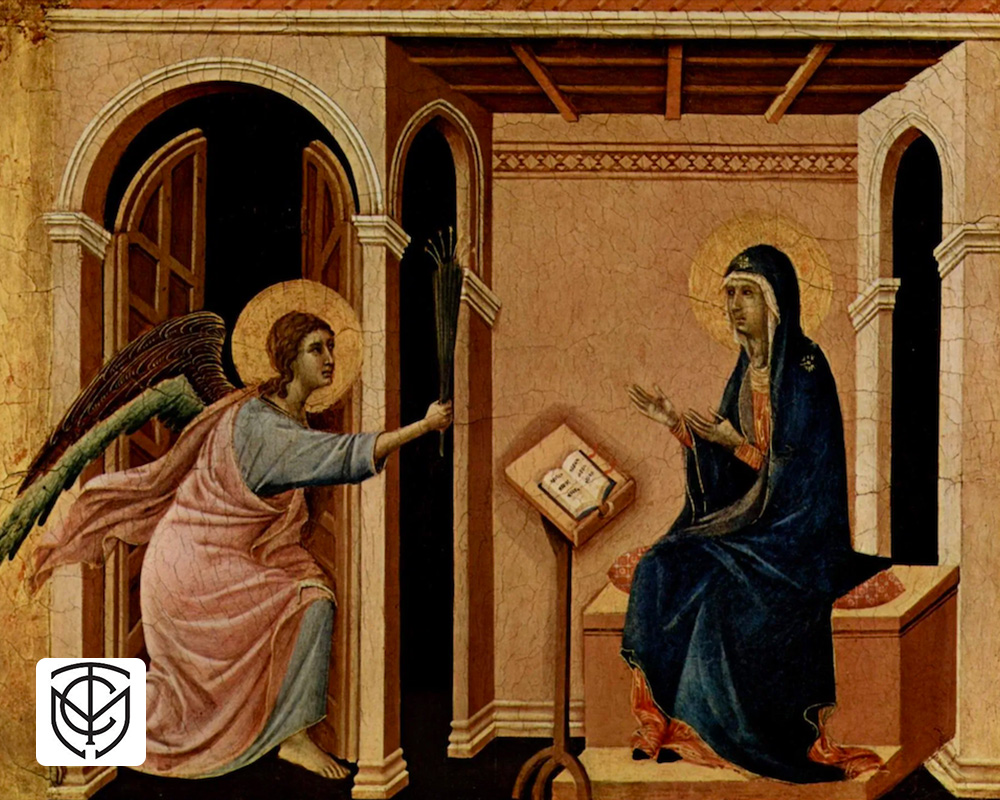 Psalm 55 speaks of crying out to God at morning, noon, and night and Catholics traditionally mark these three key periods of the day by praying the Angelus at six, noon, and six. Sanctifying the key periods of the day began in the early Church by reciting the Our Father three times a day (see the Catechism §2767), which expanded with the praying of the psalms seven times a day and once in the night in what became the Divine Office (see Psalm 119). The rosary itself continues this practice with 150 Hail Marys in place of the 150 psalms (with the old 15 decades before the arrival of the Luminous Mysteries).

The Angelus, which commemorates Gabriel’s Annunciation to Mary and Jesus’ Incarnation, provides us with a brief and simple way to mark the key hinges of the day: beginning the day in prayer, pausing during the busyness of work, and transitioning to the relative calm of evening. It invites the Lord into the day to sanctify it and to guide and protect us. It also focuses our attention on the Incarnation, the most important moment of human history, which is not simply past but continues to shape human life and to sanctify the world.

The prayer follows the following format (see below for the full text):

The three times the Angelus is prayed each day have been marked by the ringing of a special bell dedicated to Our Lady. The first three parts of the prayer have three rings each, followed by continual ringing for the final part (sometimes another nine rings or longer). Here is an example from a Church in Orly-sur-Morin in France. Just as the Angelus sanctifies time, so the ringing of bells sanctifies space. Bells call our attention to God’s presence and direct us to join them in praise. They used to serve an important role in Catholic culture by drawing all within hearing into God’s presence in the church.

Millet produced the most famous genre painting of ordinary people praying the Angelus (see others by Laronze, Legros, and Gierymski). Although simple, one feels the impact of their stopped potato harvest as the bells peel in the distance, coinciding with the setting sun. Although the painting now serves as an image of traditional Catholicism for many, Millet painted it more out of nostalgia for his own childhood. It did come at a time of rebirth for Catholicism in France, after the devestations of the Revolution and Napoleonic Wars. It was painted at the time of Our Lady’s apparition at Lourdes in 1858, the same year Thérèse ‘s parents, Sts. Louis and Zélie, were married. Catholic France would survive due to the simple prayers of the faithful, which endured the intrigues of the philosophes and radical politicians.

Today, the recitation of this short prayer could serve as a small step toward the rebuilding of Christian culture, by allowing prayer to shape, sanctify, and order our day. Although the Angelus became common with papal and even royal encouragement, it is now only recited in small pockets. We can make it more common by setting an alarm on our phones and encouraging our parishes to ring their bells again. We could also set up a smaller bell at home or school. When enough of us embrace it, it will fix itself in our broader Catholic communities (as continues in some radio and televisions stations throughout the world).

V. The Angel of the Lord declared unto Mary,
R. And she conceived of the Holy Spirit.

V. Behold the handmaid of the Lord.
R. Be it done unto me according to Your Word.

V. And the Word was made flesh, (bow or genuflect)
R. And dwelt among us.

V. Pray for us, O holy Mother of God.
R. That we may be made worthy of the promises of Christ.

Let us pray: Pour forth, we beseech You, O Lord,
Your Grace into our hearts;
that as we have known the incarnation of Christ,
your Son by the message of an angel,
so by His passion and cross
we may be brought to the glory of His Resurrection.
Through the same Christ, our Lord. Amen.

Note: The Angelus is replaced by the Regina Caeli during the Easter season.