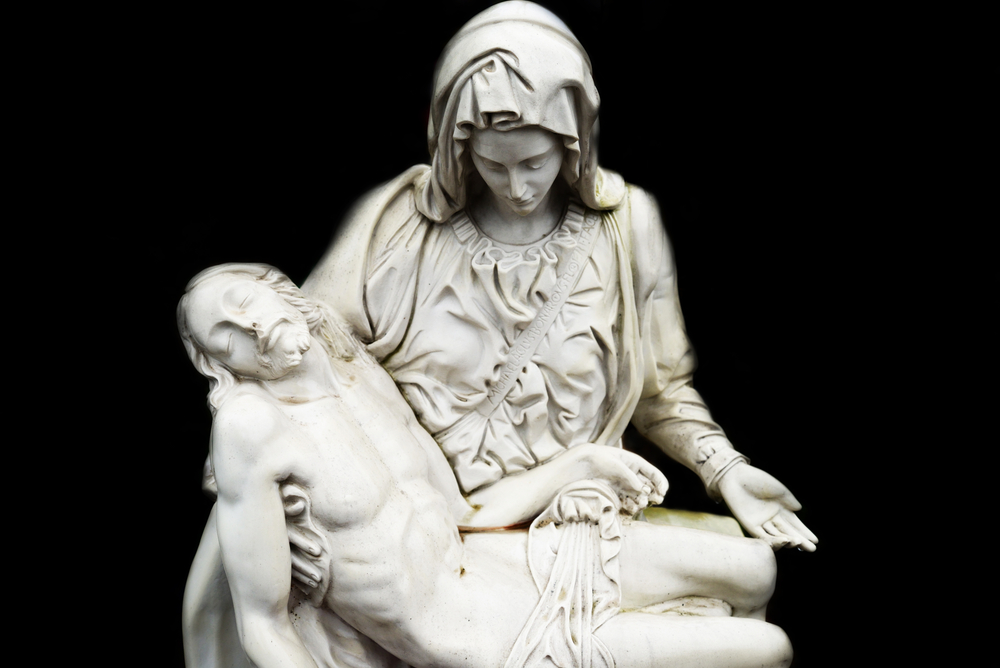 May is Mary’s month.  The beginning of May, then, offers a chance to focus on Our Lady’s place in a man’s spiritual life.  What is Marian devotion for? What are its effects and what does it do for us?

Following St. Louis de Montfort, we could list the following: loving the Mother of God instills in us an admiration for the virtue of humility that she exemplifies; it makes us realize our unworthiness before God when compared with one who was made worthy by Him to become the mother of His Son; it increases our faith, hope, and charity by giving us a model, intercessor, and guide; devotion to Our Lady fills us with confidence in God; union with her through prayer molds the soul into the image of Christ, her Son, who was formed first in her womb and then by her heart in the home of Nazareth; she teaches us docility to the Holy Spirit; above all, devotion to her leads to the greater glorification of her Son and God, who bestowed on her everything for which we honor her.(1)

We could continue, drawing from the experience of the saints: she shares with us an intimate knowledge of who Jesus is; she instructs our sometimes-cold, masculine hearts in the way of compassion and tenderness; she adds weight to our prayers; the experience of her motherly love instills trust in God’s mercy; she shows forth and encourages a respect for the dignity and beauty of women; and she is a marvelous font from which we experience the affection of God himself.  Truth is, every Catholic man should have a soft spot in his heart for Our Lady.

Mary on the Back Burner

With such effects, confirmed as they are by the lives of the saints, one would think that Marian devotion would find a more fervent practice in the Church.  However, the Protestant environment in which we live has caused a curious ailment among present-day Catholics.  Disagreements on other issues between Catholics and Protestants – specifically, the idea of the Communion of Saints, the nature of the Body of Christ, the notion of justification/sanctification/merit, and our ability to cooperate in work of redemption – make us talk over, around, and under each other on the topic of Mary.  And Catholics often feel attacked most often on this secondary topic.

As a result, a perceived need has arisen among the faithful to complete a full-scale intellectual evaluation of Marian dogma and devotion before ever giving it a shot.  “I just don’t get devotion to Mary, and so I don’t practice it,” “It’s never been explained well enough for me to feel comfortable,” “I’m a convert to the faith, so I don’t do those kind of things” – how often I hear such remarks.

But doesn’t this go against the general way we learn?  When a father teaches his young son to fish, he hooks the worm, attaches the bobber to the line on his Mikey Mouse rod, and drops it in the water for him.  The kid doesn’t study the differences between spinner, spoon, and popper lures first; nor does he learn about the test weight of his line or the size of his hook; he probably doesn’t even know that they make bobbers differently than the one sitting above his bait.  He jumps in and he experiences the results: a fish is caught, dad is proud, and he had fun.

It works the same way with devotion to Our Lady: to jump in and see the fruit, this is the quickest way to a real understanding of it.  When it comes to the various devotional practices of the faith (specifically those that are encouraged by so many luminaries in the Church) often the proof is in the pudding.

A May Day Wager

I’d like to suggest, then, a solution to this intellectual roadblock: Love your Mother!

This wager is modelled off a more famous one by the French philosopher Blaise Pascal.  “Pascal’s Wager” is often quoted, but usually misunderstood.  It is not a proof for God’s existence; nor is it a way to convert atheists; nor is it merely a matter of turning the Christian faith into “fire insurance.”  Pascal addressed his wager to those who were skeptical both of the truth of Christianity and the arguments of atheists. It sought to prepare their minds for faith and unravel their hearts from an excessive love of finite, earthly things.  Essentially, he states that – given the fact that one cannot empirically prove or disprove God’s existence(2) – it’s better to err on the side of caution and have faith in Him, because the offer of infinite happiness in heaven by believing in God trumps the finite happiness one could gain on earth by not believing.(3)  Pascal continues with practical advice: act as if you believe, take the holy water, have masses said, etc. (4) With time, he says, one will come to faith and doubt will be dismissed.  Certainly, much more should be said about authentic faith. Pascal falls short of a full picture, but the truth is that he never meant to sketch one – the wager was an invitation to skeptics to learn the faith by experience in order to be convinced of its truth.

Since the approach of many modern Catholics to the idea of Marian devotion fits into the same category of skepticism, why not have a similar bet?

So here is my wager. During the month of May, practice a Marian devotion: pray the rosary daily; speak to Mary casually throughout the day (what the spiritual tradition calls ‘aspirations’); ask her to bring light into difficult situations in your life; pray a novena for a specific intention; read a book on Marian devotion (try this, this, this, this, or this); learn a new Marian prayer (e.g. Memorare, Sub Tuum Praesidium, Angelus); read about Marian apparitions (like her appearance in Fatima, Lourdes, or Mexico); ask her to be a channel of grace in your life; open your heart to her, make her a confidant of your struggles and joys; in sum, Love Your Mother!  For one month, practice devotion to Mary.

The wager isn’t so much a gamble as an exercise of evaluation taught by Jesus himself: “By their fruits you will know them” (Mt. 7:16).  While any fundamentalist quails at such an idea – seeing it as Dr. Faustus selling his soul to Mephistopheles for the sake of power and glory – the wager is not meant to be unthoughtful.

Examine and measure the fruits of such devotion.  Gauge the peace of your soul even in the midst of storms, see if Mary’s intercession piously sought doesn’t shed light on areas of darkness, measure changes in your sensible devotion to God, determine if the evidence of divine love at work in your heart and life doesn’t increase, take a spiritual “before” and “after” shot and determine the devotion by its fruit.  She’s a patient mother and won’t mind the test.

From the cross, Jesus gave us a mother: “When Jesus saw his mother, and the disciple whom he loved standing near, he said to his mother, ‘Woman, behold, your son!’ Then he said to the disciple, ‘Behold, your mother!’ And from that hour the disciple took her to his own home.” (Jn. 19:26-27).  My challenge, brothers, is to make this wager: as beloved disciples of Christ, receive Mary into the home of your heart this May.  And witness the power of the Mother of Grace at work.

Now is the Time: Live Differently from the World