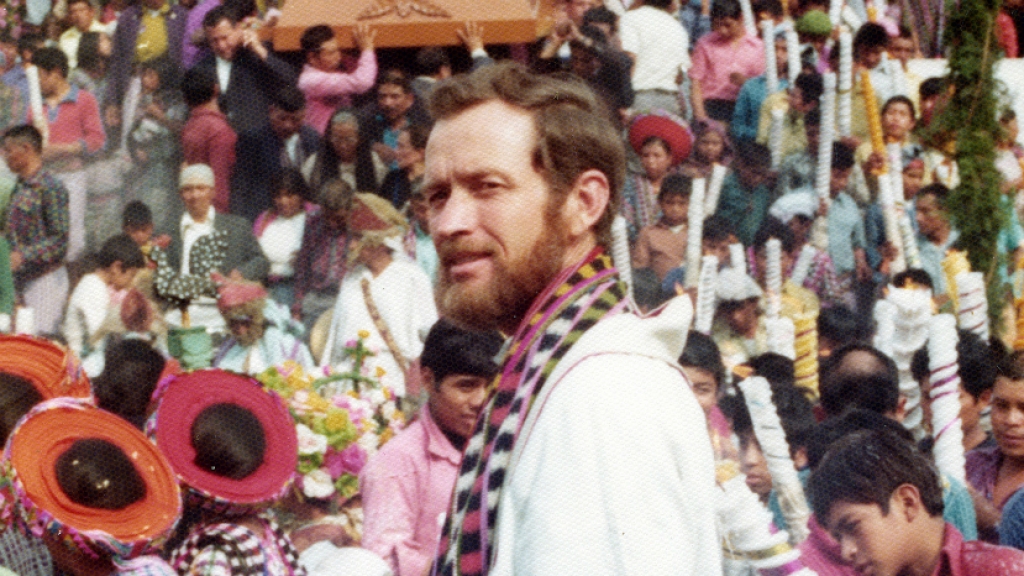 The country church is red brick, its steeple a stout weathervane amid storms on the Oklahoma plains. In 1937, Stanley Rother was baptized as an infant beneath its roof in the village of Okarche. In 1981, Father Stanley Rother was killed by a death squad at Atitlán, Guatemala.

Today, he is known as Blessed Stanley Rother to the thousands who honor his memory. To the Indigenous people for whom he gave his life, he is known as Padre Aplas. Me? I call him Stan. I’ve never met him, but his picture is taped to my bathroom mirror and I chat with him each morning as I shave.

Shrouded in steam and the smell of Barbersol, I part my thinning hair. The farm report crackles in the background. I recall Stan’s pocket comb on display at an Oklahoma City museum. It lies in a case beside an address book and other items found in the room where he was murdered. Stalwart to the end, this martyr put up one hell of a fight. Those who found him said his knuckles were scuffed raw.

I have no business calling this man my brother, but he was born around the same year as my oldest sibling, John, and was baptized in a church nearly identical to ours. Like all three of my brothers, he wore an FFA jacket, showed Angus steers at the county fair and proved himself a decent mechanic.  Like all farm boys back then, he packed hay on flatbed wagons, bale hook in hand, no shirt on his back. When I think of Stanley Rother, I catch a whiff of cow manure and stale sweat.

I once had a friend who was a Lutheran minister. He grew up in Kansas and claimed that people took on the qualities of the land on which they lived. I believed his theory then, and I believe it now. I believe it because of the farmers I have known and the families they have raised. I also believe it because my father often said, “If you’re close to the soil, you’re close to God.” His wisdom echoed the words of Scripture in I Corinthians: You are God’s field.

My friend died chopping corn on a parishioner’s farm. Father Rother worked in fields with his parishioners and took a bullet in his chest because of it.

Some folks sing when they pray. They close their eyes and raise their hands. Not so for farmers. They bow their heads and keep silent.

The holiest among them bend their knees, then touch the dirt to check its moisture.

“From the bones of our dead, to the roots of our trees.”

This phrase from Nikos Kazantzakis captures the sacramental potential of an ordinary place. Communion with a place is as universal as processions, pilgrimages and the veneration of sacred relics. It is as particular as the blessing of homes, harvests, fields and flocks.

In the New Testament, Paul the Apostle sewed canvas in Corinth, while Tabitha wove blankets in Joppa. Aloysius Gonzaga nursed plague victims in Rome, Francis of Assisi tamed a wolf in Gubbio. Isaac Jogues paddled canoes across great lakes and Kateri Tekawitha hung crosses in forests of maple and oak.

In a book called The Land, Walter Brueggerman writes of the grace endemic to particular locations, places where important words were uttered, vows were spoken and sacrifices rendered; places with deep roots and well-tended graves. If the Communion of Saints is an extended family of faith, then Heaven is surely an extension of a faithful family’s home place.

“In my Father’s House there are many dwelling places,” says the Lord. “You know the way that leads where I go.”

Thomas objects: “How can we know where you are going when we do not know the way?”

The Lord reassures the anxious apostle and all who would come to believe in Him: I am the way, He says. In effect, He is telling us: I am the way home, the way to your true and eternal home.

Our family photo albums replicate those of the Rother family that are displayed in the same museum that houses his pocket comb and address book.

At my sister’s home, the night before her funeral, we opened the old albums and reminisced over snapshots of Pontiacs, prom dresses, hayrides and collie dogs. There were snapshots of a young man in a tee shirt with a crew-cut who would become Alberta’s husband of sixty years, the man who bathed and fed my sister the last twelve years of her life.

Alberta was buried in a cemetery less than a mile from a red-brick church, next to the grave of her firstborn child.

The wind was stiff the day we placed her body in the earth. Prayers darted like swallows through the gusts. Muffled cries rolled across furrows of upturned clay.

May the angels come to greet you.

In this region that my family calls home, chants still echo amid carved niches in wooden altars. And cows still bed beneath hay mows planked with ancient oak.

May the martyrs come to meet you.

May Stan be among those waiting for you, Alberta, tool box at his feet, scuffed hand reaching for the door. The screen door of the house, that good house, the sturdy farmhouse of the Father.

Mike Bonifas trains horses in West Texas. His writing has appeared in Dappled Things, Ruminate Magazine and Pilgrim: A Journal of Catholic Experience.

faithfarmersholinessland
07 14 2019
Back to all articles