A Pilgrimage to Beauty: The Gandegghütte 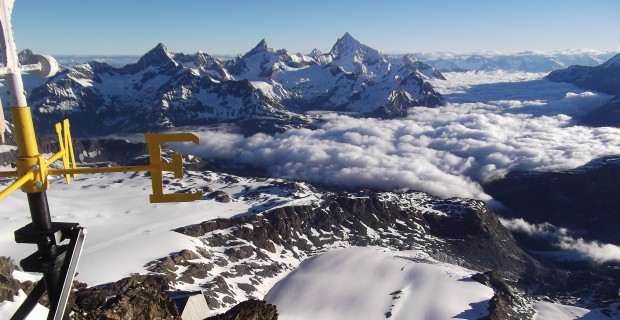 It was one year ago today that we set out on a pilgrimage to beauty. Like all pilgrims, we were in search of the God lost in Eden. But unlike most pilgrims, our path was not a physical journey, but a transcendental one. The way of this pilgrimage was beauty itself. Seeking God who is himself the fullness of beauty, we took the great theological aesthete, Hans Urs von Balthasar, as our mountain guide.

“Beauty is the word that shall be our first. Beauty is the last thing which the thinking intellect dares to approach, since only it dances as an uncontained splendor around the double constellation of the true and the good and their inseparable relation to one another” (Von Balthasar).

We left our homes and traveled to the Schweizer Alpen – the Alpine Mountains of Switzerland. We sought the greatest natural expression of God’s beauty in creation. And, indeed, this was found, for as our train approached Interlaken, what we beheld suddenly held us enraptured.  As Hilaire Belloc described it on his Path to Rome:

“These, the great Alps, seen thus, link one in some way to one’s immortality… let me put it thus: that from the height of Weissenstein I saw, as it were, my religion. I mean, humility, the fear of death, the terror of height and of distance, the glory of God, the infinite potentiality of reception whence springs that divine thirst of the soul … it is this also which leads some men to climb mountain tops, but not me, for I am afraid of slipping down.”

Our pilgrim was modeled after a mountain climb – ascent, summit, descent. Our ascent was Gimmelwald, a cliff-edge village nestled below the mountains Eiger, Monch and Jungfrau. Here waterfalls flowed through steep green pasture as our hearts became re-attuned to a symphony of beauty. Our descent was Engelberg, an ancient monastic town, high above the city of Luzerne. It was here that amidst mountains shrouded in clouds and pristine alpine lakes, we recovered the lost art of contemplation from the chant echoing out of the valley below.

But as noble as this ascent and descent were, an experience at the summit was so beautiful that it redefined one’s existence. Approaching the summit, we traveled up through the Matter valley in the canton of Valais and arrived at an alpine meadow (zur matte in the German) – the town, known since 1495, as Zermatt. Here one is completely surrounded by the Pennine Alps – Monte Rosa, Breithorn, Lyskamm, Weisshorn, Matterhorn – as if they were the Ourea of Gaia themselves. But our summit lay higher still, far above Zermatt, up through the clouds and to the very foot of the heavens; herein lies the Gandegghütte.

The Gandegghütte, built in 1885 by Swiss Mountaineers, was to be our home for the four-day summit of our pilgrimage. An hour hike up to a saddle and one has entered Italy. A glance to the east reveals the massif known as Monte Rosa, the highest peak in Switzerland. Looking to the west one sees Europe’s most majestic peak, the Matterhorn. As beautiful as they were during those days, the great moment of encounter with beauty took place in the late hours of our final night.

After a long evening of Euchre and Weissbier, we stepped outside to conclude the night. Having no expectation, what we saw immediately took our breath away. The moon was full and illuminated everything with great strength. The clouds, settled just below us, completely enveloped the valley beneath, filtering and mystifying the electric lights of the town. Between the moon and the clouds stood only one thing – the Alps. They radiated majesty, purity and brilliance. They stood as they always had, in their perfection, awaiting the divine. In that moment, it was as if the only things that existed in the world were ourselves and the peaks, and the only thing that mattered in this moment was this seemingly pre-arranged encounter. The entirety of the moment held a form – there was a unity and a discernible purpose that far exceeded the sum of the many elements at work. For “only that which has form can snatch one up into a state of rapture. Only through form can the lightning-bolt of eternal beauty flash” (Von Balthasar).

We have no evidence of this form and no photographs were taken; we ourselves were already transported. It was simple – one of those moments in life so beautiful that the entirety of one’s existence is redefined. And our hearts were full, because through the form, content was being handed over, and that content was the fullness of love. The Trinity had broken forth through created beauty and given us a foretaste of heaven.

God in beauty – beauty in God. We had discovered the heart of our pilgrimage. To separate God from beauty or beauty from God is to lose them both. Yet to live with them in unity, an act requisite of grace, is to experience the glory of heaven in the beauty of creation. It is to know God in nature, to encounter him and radiate the youthfulness that comes only from this communion. For “only the person who contemplates the beauty of nature in God and is accustomed to regard it as his voice, his sphere, the mirror of his countenance, can even in his mature years, experience nature as naively and ecstatically as in his eighteenth year, without a drop of melancholy” (Von Balthasar).

As the months have passed from that moment outside the Gandegghütte, God continues to deepen the gift of that moment. Life in Christ allows not merely an expanded perception of beauty, but a deeper elucidation and capability to be transformed by it.  And it was in light of this – the quiet of prayer – that our pilgrimage is now becoming our mission. He thus spoke:

“See that you make everything
according to the pattern
which was shown to you on the mountain” (Hebrews 8:5).

The mountain was the Gandegghütte and the pattern was the given experience of beauty. These words from the Letter to the Hebrews quote directly from Exodus 25, where God reveals his glory on the mountain of Sinai. Glory, the biblical word for God’s beauty, is revealed in the moment when God desires to dwell more deeply with his people. The pattern, τύπος (typos) in the Greek text, literally means “a figure formed by a blow or impression.” As in a blow, the impression formed by that moonlit moment was arresting, as the revelation of the boundless God shown forth.

A new mission began – the restoration of beauty in the life of faith. As Von Balthasar says, “The beautiful then, will only return to us if the power of the Christian heart … experiences the cosmos as the revelation of an infinity of grace and love – not merely to believe but to experience it.” And we do not experience beauty for ourselves; it is a gift that cannot be possessed, but must be handed over. The fullness of divinity, present in the Incarnate God, does not radiate and bask in itself, but desires to become that foolish wisdom that seeks to pour itself out.

The Gandegghütte remains forever the place of great encounter with beauty. In those days there, in the hidden school of divine love, God taught us to encounter him through beauty, in their respective three modes: the beauty of creation, the beauty of friendship, and the beauty of suffering. Only together do these three express what was experienced, and only together will the encounter with them lead to the fullness of Trinitarian glory.

As our time in this life passes, let us return often to the treasury of this memory. Let us go there to escape the ugliness of sin and the mediocrity of life, and draw new life from that moment when God was so near and his beauty held us so still. Let us remember that the resurrection is not merely the conquest of death, but of all that is ugly as well; that in the end, “beauty will save the world” (Dostoyevsky).

Gossip About You? Here’s 8 Tips from St. Francis de Sales