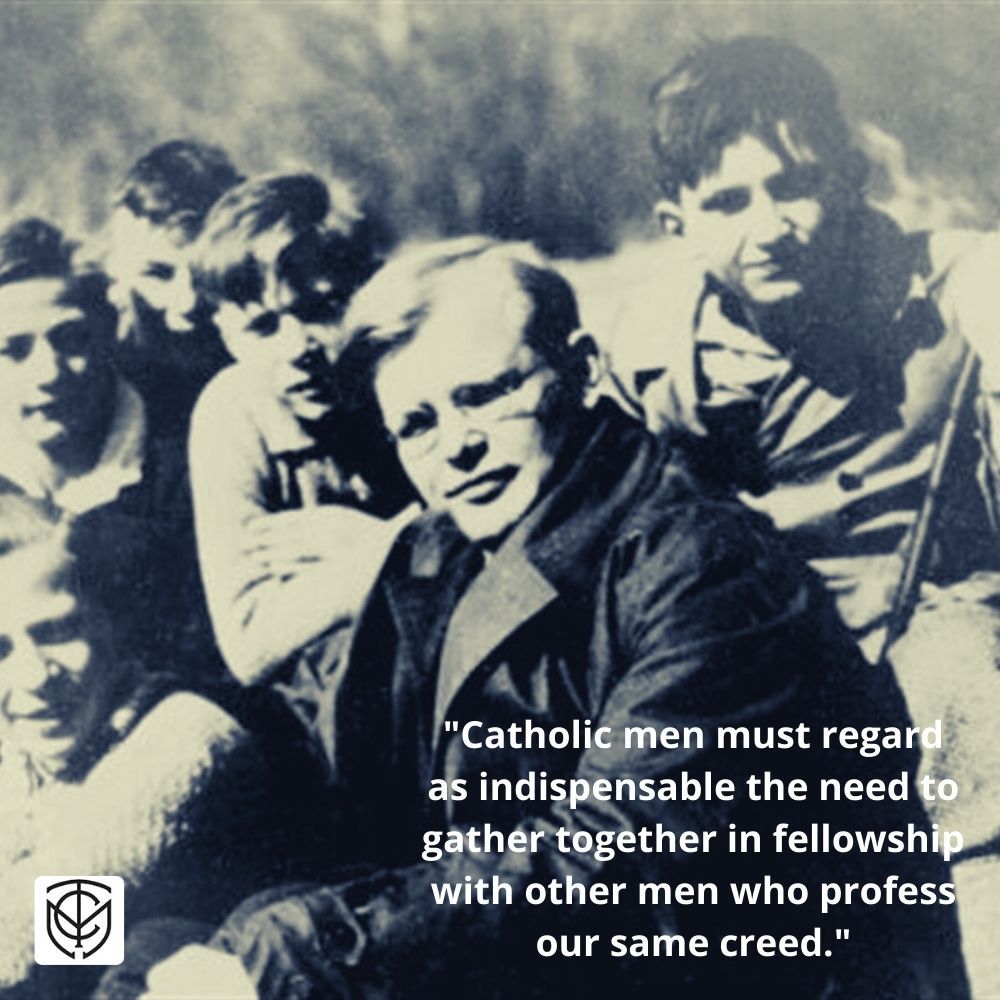 Catholic men must regard as indispensable the need to gather together in fellowship with other men who profess our same creed.  To do so is not an option, except insofar as Christ affords us the freedom to choose to neglect this foundational aspect of Christian life.  The reason why we must gather together in fellowship with other Catholic men is quite simple; I can think of no better words than those of Holy Scripture for describing it: “As iron sharpens iron, so man sharpens his fellow man” (Prov 27:17).

But how does this “sharpening” takes place?  You might take as an example how the  Exodus 90 challenge seeks to realize this end in the context of a fellowship of Catholic men.  How it does this is straight forward, and can be named in just a few words—prayer, fraternity and asceticism.  These practices, while sometimes taking on different forms in different fellowships, are (or at least should be) the standard practices of fellowships of Christian men.  Moreover, they are all extremely important for the success of a fellowship.  If any fellowship is lacking in even just one of those three essentials, it will necessarily be lacking in the other two as well.

That being said, without detracting from the very real importance of prayer and asceticism, I think it is worthwhile to focus our thoughts directly on fellowship—or, if you prefer, fraternity.  More specifically, I think it would be instructive to reflect on fraternity by contrasting it to asceticism, in order to grasp its immense value.  To that end, it is in order to cite a passage from Dietrich Bonhoeffer’s Life Together:

The believer feels no shame, as though he were still living too much in the flesh, when he yearns for the physical presence of other Christians.  Man was created a body, the Son of God appeared on earth in the body, he was raised in the body, in the sacrament the believer receives the Lord Christ in the body, and the resurrection of the dead will bring about the perfected fellowship of God’s spiritual-physical creatures.  The believer therefore lauds the Creator, the Redeemer, God, Father, Son and Holy Spirit, for the bodily presence of a brother*

That first sentence is very important, and worth quoting again.  The believer, says Bonhoeffer, “feels no shame, as though he were still living too much in the flesh, when he yearns for the physical presence of other Christians”.  Moreover, he even “sees in the companionship of a fellow Christian a physical sign of the gracious presence of the triune God” (Bonhoeffer, pg. 20).  Thus we see the difference between fraternity and asceticism.  Whereas asceticism entails detaching oneself from some good thing(s), fraternity entails the wholehearted embrace of some good thing, or rather some good person—namely, one’s brother in Christ, or even better, Christ in one’s brother.  It is no surprise, then, that Father Doerr—the founder of Exodus 90— has said that, of prayer, fraternity and asceticism, fraternity is the most crucial to the group’s success in the Exodus 90 challenge. In fact, that makes perfect sense. For in fraternity God provides the brothers with a good (and better!) thing to embrace, as they endure hard self-denial and detachment from lesser goods.  So if you plan to take on the Exodus 90 challenge (as I do), or any spiritual challenge for that matter, make fraternity a non-negotiable!

*Bonhoeffer (1906-1945) was a German Protestant Pastor who was executed by the Nazi’s for his love and defense of the Jews. My first TCM article was written on Bonhoeffer and obedience to God.

Reconcile With Your Brothers (And Avoid Hellfire!)