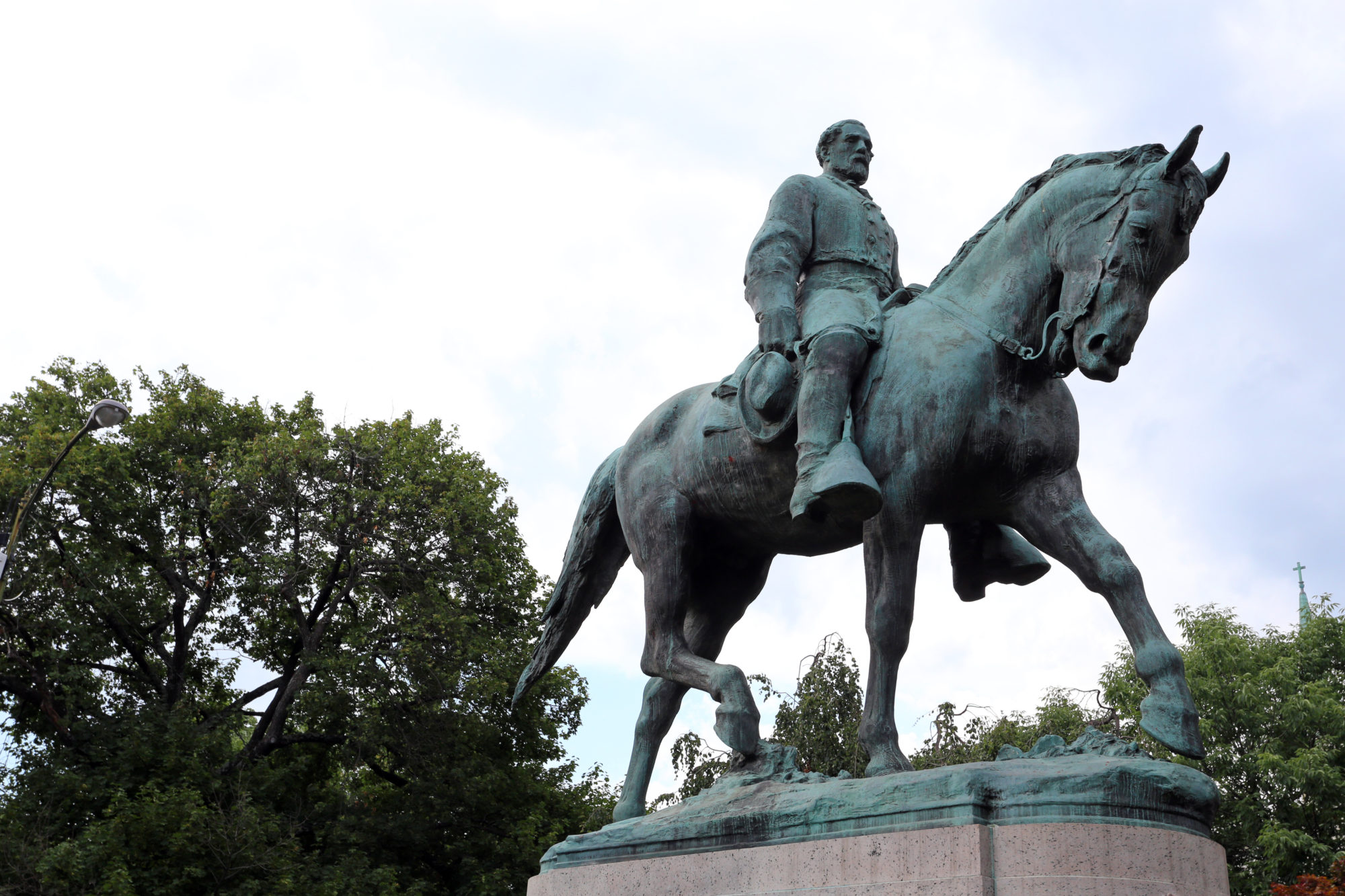 What happens when erroneous ideologies conflict? Very simply, violence, hatred, and more error, the likes of which we saw recently in Charlottesville.

Our president attempted (poorly) to make this point when he said “I think there is blame on both sides.” Because he lacked the philosophical and moral foundations to make such an assessment, and because he failed to adequately denounce the evil of racism and white supremacy, he has deservedly endured a significant amount of harsh criticism for this apparent moral equivalence. But lost in the frenetic, media-induced merry-go-round of condemnation (or lack thereof) and outrage (or lack thereof) is a kernel of truth. Despite his inability to articulate why the neo-Nazis’ perception of racial superiority and the Antifa’s efforts to tear down statues (among other things) were both wrong, Trump was partially correct.

Cheers! Now check your email to confirm your subscription.

Politicians, the media, and other influential secular institutions want to classify everything under two labels – right or left, liberal or conservative, “us” or “them.” Simplicity gets votes and makes for good ratings. They have no time to include other options. Although our Catholic faith does teach that right and wrong are moral absolutes, we also know that humans tend to make moral questions very messy. What we saw and heard in Charlottesville (and elsewhere) – the deplorable, racist, and idiotic chants; the toppled monuments, and the violent mobs – was a man-made philosophical conundrum on display; an artificial dichotomy between right and wrong. In an excellent analysis for National Review, Jonah Goldberg explained that a universally applicable binary moral formulation of worldly actors is untenable:

Even a moment of serious thought should demonstrate how absurd this is. Mob bosses kill each other all the time. There’s no rule that says serial killers can’t kill other serial killers. The quest for power routinely pits decent people against decent people and evil people against evil people… The Spanish Civil War pitted two bad movements against each other. Members of al-Qaeda and ISIS are not above killing each other. Stalin killed more Nazis than FDR did — but that doesn’t make Stalin a better man than FDR.

For Catholics, there is another option.

It must be unequivocally stated that racism, white supremacy, and any other ideology which claims that certain human beings are superior to others simply because of a trivial external characteristic over which we have no control – such as skin color or place of birth – are wrong and immoral.

For Christians, our belief in this inherent dignity and worth of every human is grounded in our belief that we were created in the image and likeness of a loving God who desires that we spend eternity with Him. Our humanity is but a reflection of the divine nature and that gives us dignity and worth. Anything less is an inadequate expression of the truth. Thus, a faithful Catholic man cannot in any measure agree with or support white supremacists or racists of any sort.

In fact, research by the National Consortium for the Study of Terrorism and Responses to Terrorism (START) at the University of Maryland found that some white supremacist groups assert that “Christianity, which emphasizes forgiveness and compassion, makes the White race weak. Furthermore, the significance of Jesus, who was a Middle Eastern Jew, makes it especially anathema for any White person to follow Christianity.”

Men though, perhaps for a variety of reasons, seem to be especially susceptible to temptations of idolizing perceived strength and superiority, more so than women. Generally speaking, we are competitive, brash, and prideful in ways much different than women. We are intensely visual, so we tend to dwell and make judgments based largely on externalities. We are also drawn towards fraternity. Those who work with extremists and supremacists say men are also partially drawn to “becoming part of something bigger and more meaningful than themselves.” Gangs of all sorts, including white supremacists, seize on these aspects of our fallen human nature.

From a Catholic perspective, racism is a form of idolatry, and is therefore sinful and must be condemned. But there is also a nefarious odor about an ideology that seeks to untether morality from religious convictions, which is what the other “side” of today’s debate does.

“Secular thinkers,” says Archbishop Charles Chaput of Philadelphia in his recent book Strangers In A Strange Land, “live off the capital of religious beliefs they reject.” What they really want is the society Christianity built, but without Christ. This new, progressive morality, detached from the so-called “baggage” of formalized religion, is founded on a flawed sense of human “equality,” where the rights of the individual are paramount. Among some of the features Archbishop Chaput sees in America today, one is “malice wrapped in the language of tolerance, sensitivity, and rights. It consists in an appetite to use power not simply to prevail in political debate, but to humiliate and erase dissent, and even its memory, in reworking the cell structure of society.” Somewhat prophetically, he even mentions “efforts to scrub Confederate public monuments from the South” as an example of this modern feature. Whereas race, ethnicity, class, or nationality become monuments to false idols for one group, “tolerance, sensitivity, and rights” become idols for the other.

And so we Catholic men find ourselves unable to find common ground with racists, and ostracized from the ranks of liberal progressives due to our religious beliefs. Trump was right: both sides are to blame, he just doesn’t know why.

When we look at these issues through the lens of our faith, we quickly realize that the question is not simply whether or not racists have a right to provoke hatred, or whether angry mobs can tear down brass, bronze, or stone statues which they might find offensive. Throughout history groups have provoked hate, and statues have come and gone. There are more fundamental problems to address about the nature of the human person and what constitutes morality. We first need to ask ourselves: “What monuments have we erected in our own lives in place of the one, true God?” For some it may be Netflix. For others alcohol. Or pornography. In others it may be race, class, or their perceived “gender identity.” But the First Commandment comes first for a reason.

Unless (and until) we as individuals, and our nation as a whole, can tether morality to religion, rediscover the dignity of human life, and remove the idols from our lives, we will continue to see statues toppled and hate increase. This will only be possible if faithful Catholic men lead the way.

If you harbor any notion of superiority, for any reason, it might be helpful to take a moment to pray the Litany of Humility:

O Jesus! meek and humble of heart, Hear me.

From the desire of being esteemed… Deliver me, Jesus

From the desire of being loved… Deliver me, Jesus

From the desire of being extolled… Deliver me, Jesus

From the desire of being honored… Deliver me, Jesus

From the desire of being praised… Deliver me, Jesus

From the desire of being preferred to others… Deliver me, Jesus

From the desire of being consulted… Deliver me, Jesus

From the desire of being approved… Deliver me, Jesus

From the fear of being humiliated… Deliver me, Jesus

From the fear of being despised… Deliver me, Jesus

From the fear of suffering rebukes… Deliver me, Jesus

From the fear of being calumniated… Deliver me, Jesus

From the fear of being forgotten… Deliver me, Jesus

From the fear of being ridiculed… Deliver me, Jesus

From the fear of being wronged… Deliver me, Jesus

From the fear of being suspected… Deliver me, Jesus

That others may be loved more than I… Jesus, grant me the grace to desire it.

That others may be esteemed more than I… Jesus, grant me the grace to desire it.

That, in the opinion of the world, others may increase and I may decrease… Jesus, grant me the grace to desire it.

That others may be chosen and I set aside… Jesus, grant me the grace to desire it.

That others may be praised and I unnoticed… Jesus, grant me the grace to desire it.

That others may be preferred to me in everything… Jesus, grant me the grace to desire it.

That others may become holier than I, provided that I may become as holy as I should… Jesus, grant me the grace to desire it.

At being unknown and poor… Lord, I want to rejoice

At being deprived of the natural perfections of body and mind… Lord, I want to rejoice

When people do not think of me… Lord, I want to rejoice

When they assign to me the meanest tasks… Lord, I want to rejoice

When they do not even deign to make use of me… Lord, I want to rejoice

When they never ask my opinion… Lord, I want to rejoice

When they leave me at the lowest place… Lord, I want to rejoice

When they never compliment me… Lord, I want to rejoice

When they blame me in season and out of season… Lord, I want to rejoice

Blessed are those who suffer persecution for justice’ sake, For theirs is the kingdom of Heaven. Amen.

Charlottesvilleidolsmonumentspoliticiansracism
08 25 2017
Back to all articles

The Inoculation of Sin

What We Lose When We Play Pokémon Go