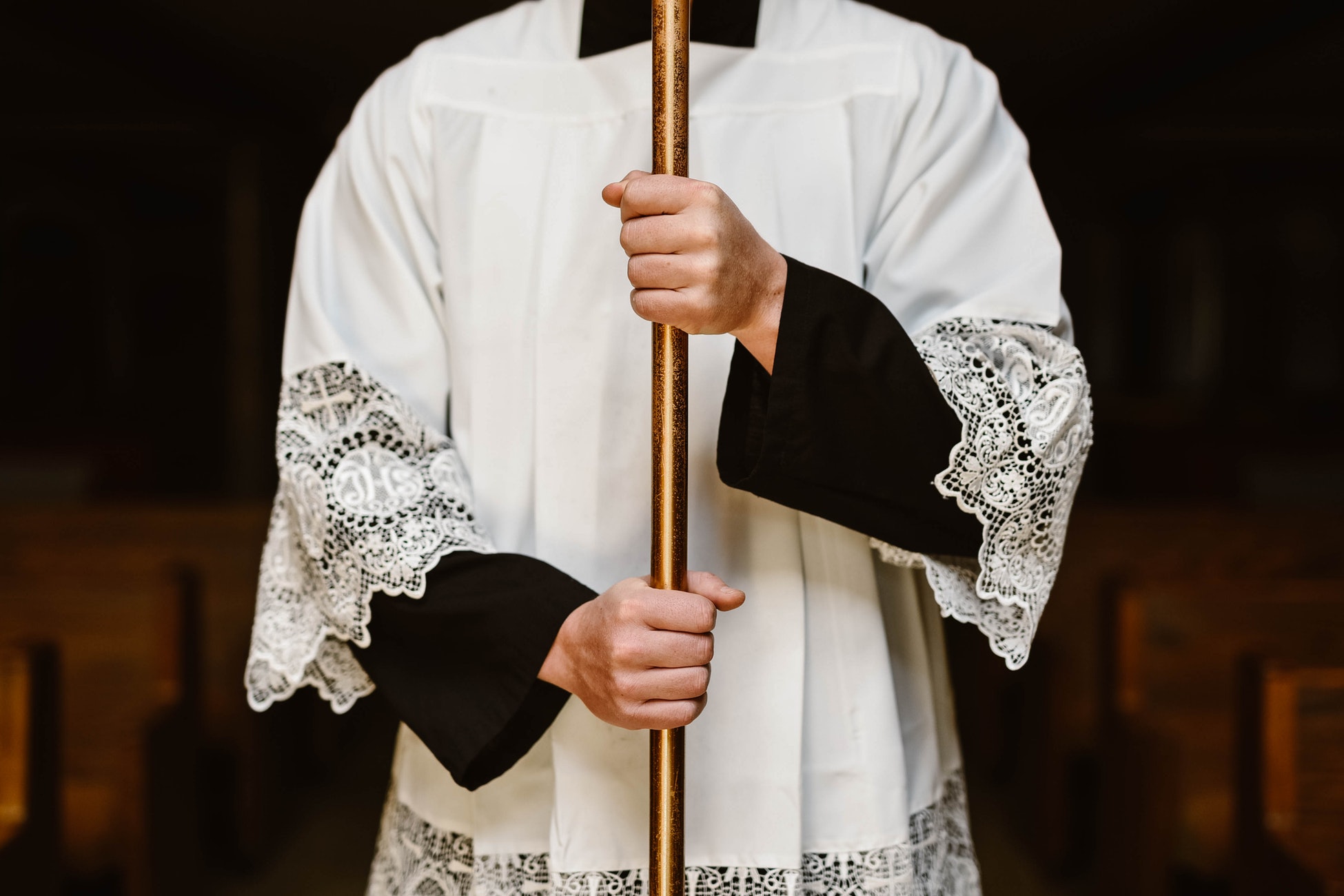 Wise cultures don’t let boys idle long – as boys that is.  If you let them idle, that unnecessary phase of “adolescence” creeps in.  Adolescence, an invention of unhealthy cultures wherein boyhood is extended as far as possible into would-be adulthood, is an enemy of maturity.  Once a boy comes to a physical strength and mental capacity capable of doing some decent work and being a part of the world of men he should, in fact, be integrated into that world.  If he’s not, his boyhood will grow into the self-absorption that is so clearly on display in childish men today.

St. Luke tells us that when Jesus “became strong” and “filled with wisdom” – at age 12 – He went on a journey without the permission of His mother.  We would not say He was “disobedient” to His parents, but it seems He recognized something that, perhaps, they hadn’t yet.  When Mary and Joseph find Him in the Temple and give Him a bit of a scold (“How could you do this?”), Jesus responds with the obvious, “Do you not know I must be about my Father’s business?”  To this Mary was silent.  She knew it was true.  He was strong and able, so He must be about His Father’s business.  He was no longer just her boy.

It’s unlikely too that when Jesus returned home he went back to helping His mother with her chores.  Very likely that strength and wisdom was put toward His earthly father’s business: carpentry.  This was a practical necessity for the Holy Family, but a truly human one (and Jesus was truly human).  He was, after all, identified as “the carpenter’s son” later in the Gospels.  Luke identified the “losing” in the Temple as a sort of rite of passage by beginning it with “the child Jesus” in the description of Jesus entering Jerusalem (v. 2:43), but then after this referring to Him just as “Jesus” on the way home, dropping the “child” (v. 2:52)  Up until that moment, in fact, Jesus is always called “child” or “infant.”  When it was time for Jesus to become a man, His mother allowed it to happen and his Father brought Him in, and this was mirrored in being brought into the work of St. Joseph.

(Want to read more about how boys grow up and why some men don’t, read Leaving Boyhood Behind).

The Work of Men

Physical work and craft is the most universal form of a rite of passage for boys.  Even in cultures that had more elaborate aspects of a boy’s passage to manhood, like hunting lions alone, those ceremonies and customs were still related to their future work as a man.  In the West this was true as well, where apprenticeships and traditions of work were given over to boys as soon as they were strong and wise enough for it.  This is, in fact, preserved for us to see in the Amish communities.  Even knighting was, in its most ancient form, a rite of passage for a squire wherein he was handed the tools of the trade for a soldier (sword, etc.), much like a blacksmith would have been handed his tools once he was approved as a master by the local guild after his apprenticeship (“master,” by the way, is where we get the word “mister” today).  When we do father/son retreats on our farm, we don’t simply hand over ideas to be shared with the men and boys but work to be shared.

To give a boy work does not mean to dump a man’s job on him crushingly, but it does mean to give him what he is able to receive, and perhaps to ask him to receive more than he knows he can.  My sons slowly grow in responsibility on our little dairy farm, getting closer to the danger and gravity of getting milk from half-ton animals that don’t always do what they are supposed to do (like boys).  Just this morning my oldest asked while we were milking, “Do you think I can carry a new calf in?”  When a calf is born in the field, we carry them to the barn.  The calf, at about ninety pounds, is not always excited about this and writhes about.  Carrying him is hard enough, but the concerned mother is ever close – and anxious – bringing a certain intensity to the whole thing.  And, of course, cows tend to go far from the normal paths to calve.  My son is coming into his strength and gaining wisdom about cows, and he wants to “ascend” in his work so it reflects and confirms what he senses about himself.

The Work of God

The Church has employed this wisdom of work as well in relation to the highest work of prayer, the opus dei, work of God, which occurs most perfectly at the altar during the Mass.  Because true masculinity is required for the ministerial priesthood, the work of the altar is truly a “man’s job.”  Because it’s a work for men, the Church gives some of that work over to boys when their strength and mind are capable.  And, step by step, the boy ascends in various duties of the altar as he is able – he carries this or that, he lights, carries, and extinguishes fire; then moves a book, then he might accompany the priest around the altar with incense, and later he might even carry the gravity of a “master,” the Master of Ceremonies.

Such things were (and are) much more significant in the Extraordinary Form (the Latin Mass), because the server simply has harder jobs to do, and more of them.  Even in the most deprived battle fields or remote missions, one is not surprised to see pictures of priest with only the essentials – bread, wine, vestments… and an altar boy.  The traditional orders also helped walk a boy up the proverbial steps of serving into the minor orders, all the way to ordained priesthood, each step carrying with it new responsibilities related to the work of the altar, the work of God.

All of this wisdom is forfeited when boys are asked to serve at the altar alongside girls.

Cardinal Arinze has called the allowance of girl altar servers to be a “dead end,” it doesn’t go anywhere.  I would say, in fact, that its cruel.  It both encourages a girl up steps that eventually she can’t fully ascend, and it discourages boys from serving at the altar, because in their youth boys desire to differentiate themselves from the realm of women and children by doing things only men can do.

Of course there may be reeling at this idea inside of us because we are conditioned to think about things in ideologies instead of realities, but (a) boys at certain ages want to do things that only boys can do, (b) altar serving is inherently related to the priesthood, (c) women can’t be priests, and (d) to mix them all up together is confusing to all involved.  It is likely that the more someone denies one of these things (that only men can be priests, for example) the more they deny the need for boy-only altar servers.  Those that are formed by a more obvious observation of human nature and the settled theology of the Church, however, know that this is so, and if they do not insist on it are merely waiting for a prudent way to bring the boys back to the altar.

By having just boys at the altar there is the happy side-effect of having more boys there and, therefore, more boys consider the priesthood.  A vocation, as Wendell Berry has put it, is more than a job – it’s the work that is set before you that, in some ways, is only for you.  You are suited to it and it is suited to you.  He was not speaking of the priesthood, but we can, and we can speak of it as the work a man is called to.  If he is not brought into that work effectively, he can never develop a sense of whether it is for him, or perhaps the seed is never planted.

There’s no need to go into detail about how having just boys increases the number of boys serving.  Just go to any parish that allows only boys and you’ll see this is so.  In my tiny parish (where only boys can serve) they regularly turn boys away or assign them to different Masses because the sanctuary – that holiest of workshops – is only so big.

Now that we are seeing more clearly the collapse and failure of innovative Catholicism, it’s time to embrace the wisdom of the Church that knows – uniquely – the ways of man and the ways of God.  Some of the “ways” are just for men, and because of that we need to allow a space that is just for boys, and every Catholic Church has that space, that workshop, in the sanctuary.

altar serversmasculinityMasspriesthood
02 16 2019
Back to all articles

Grace of the Mind and Mental Health

What I Don’t Like About Catholicism: All the Advice