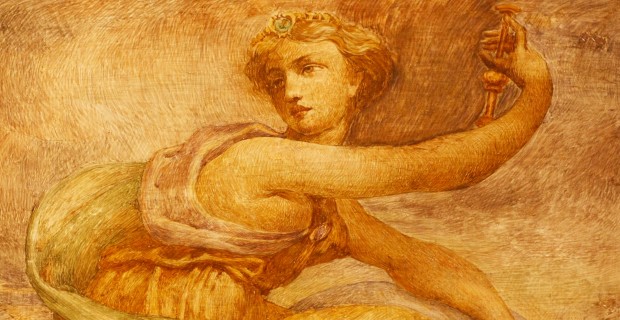 People laugh at medieval feudalism as hopelessly out of date and even at times barbaric. There is one aspect, though, that continues to intrigue—courtly romance. The codes of chivalry became normative at the time of the Crusades, with international armies finally fighting together instead of against one another. What stands out at this time is that in the face of Islam, Western knights saw their duty not only to protect women, but to honor and reverence them. Think that these knights laid the foundation for the greatest cultural exercise of Christian history: the construction of the great Gothic Cathedrals to honor their queen, Our Lady.

It is one thing to honor and even reverence women, but Dante, perhaps the greatest of Christian poets, took things a step further. Dante’s life was changed by beholding a young woman, whose beauty and grace shook him to the very core. His “conversion of love” at the feet of Beatrice became the means of his pilgrimage to even greater heights. Dante never did embrace and unite himself to Beatrice (she was married to another), not uncommon in chivalrous love, but his love for her became the means of his advance through the depths of darkness and the purifying fires in order to grasp a glimpse at the fullness of grace and truth Himself in paradise. It is Beatrice precisely who leads Dante through heaven, until she fades out of view at the most crucial moment, his vision of the Trinity.

I would say that the basis for Dante’s attachment to Beatrice, and its effects, is something that I would call “natural grace”. This is not, by any means, an attempt to make God’s supernatural gift of his divine life something transmitted naturally to all people. Rather, natural grace is the gratuity of goodness and beauty that we find in the natural world. It is the radiation that comes forth from Creation manifesting its Creator in a way that strikes the heart and soul in an intuitive way. In my opinion, by far the greatest source of natural grace is the climax of God’s creation: woman.

Adam was created, as Pope John Paul II tells us in his theology of the body, in solitude. Nothing in the world can be his counterpart; everything else in creation ultimately leaves him feeling flat. His reaction to the creation of Eve is particularly telling. This at last is bone of my bone and flesh of my flesh. It is woman that manifests to man the heart of reality. He sees the goodness of creation, especially in humanity, manifested in the life partner that God made for him. This “theophany” in woman is meant to complete him and lead him toward God, but, grasped for its own sake, this gift brings about man’s destruction. Women are a “theophany” of natural grace, not a possession that should be seized at the expense of a supernatural ordering to God, as we see in Adam’s disobedience.

It is clear that Adam’s sin is not primarily sexual. Its essence lies in the disobedience he, and Eve, showed toward God. However, in the punishment that they received, it is clear that sexual relations would never be the same. Women would long for their husbands, but they would lord it over them. Women would be dominated by men, subject to the excesses of their sexual desire and social control. The sexual revolution was a societal attempt to correct this fallen condition, doing so by freeing women from family life and placing them at the level of sexual aggressors in parity with men. Could we say that the relations between the sexes are now at their lowest point?

What then is needed? I would say that something more akin to the medieval revering of femininity. This is a delicate and maybe even dangerous endeavor. Women have great power over men, even to the point where they can become overwhelmed by the effects of their beauty. Most do not respond like Dante, but rather want to seize that beauty and use it to fulfill lower and base desires in an animalistic way. This does not honor women, but objectifies them and even trivializes their beauty, especially as men move from woman to woman.

There is another dangerous way of reverencing femininity. We know that in the past femininity was directly worshipped due to its embodiment of the power of fertility. Men are attracted to women’s bodies still as a sign of life and the goodness of creation. The sexual organs receive the seeds of new life and are the passage of this life into the world: an awesome power! Women’s breasts in particular serve no direct sexual function and are created as a source of nourishment and comfort. It is no wonder that this would be a source of attraction for men, but what we have seen is rather the idolization of women’s bodies. Like the worship of mother earth in prehistoric times (which literally produced feminine idols), women’s sexual organs are worshipped in a selfish way, which makes them objects divorced from a personal bond of love. This is still the domination and division introduced by the fall.

The honor of women by men must reflect both the role of women as a natural manifestation of God and also a call to a supernatural love. As the highest manifestation both of beauty and of the production of life, women do deserve reverence. A natural form of “worship” for a “natural grace”. The medieval knight saw his duty in paying honor to women and protecting them. In a culture that has demeaned the role of women, and has not allowed them to be treated differently than men, we need to rediscover the distinct roles and relations of the sexes. Women should not act like men and should not be treated like men. They are too wonderful for this! When women are treated in this way, we also lose the essence of masculinity.

Adam found his true identity in the theophany of woman, his true helpmate. The true partnership of woman and man has been obscured by our culture. The sexual revolution responded to what may have been some genuine problems, but responded by destroying God’s plan for man and woman and their life together in the family. Woman’s unique contribution as wife and mother has been demeaned and must be elevated as something worthy of reverence! The feminine genius that stems from this uniqueness must be allowed to let its power be felt in the world, not in a masculine way, but in a way that is distinctly feminine. By revering this unique role, men, like Adam, will rediscover their own masculine role again. They must see the beauty and grace of women, not as something to be possessed and exploited, but as something to honor within a partnership of love. Physical beauty is only a sign of the deeper beauty that all of humanity possesses, a beauty rooted in God, and one that must be ordered back to him. May men and women find in each other this beauty, and may it help propel them forward in their joint pilgrimage toward paradise!