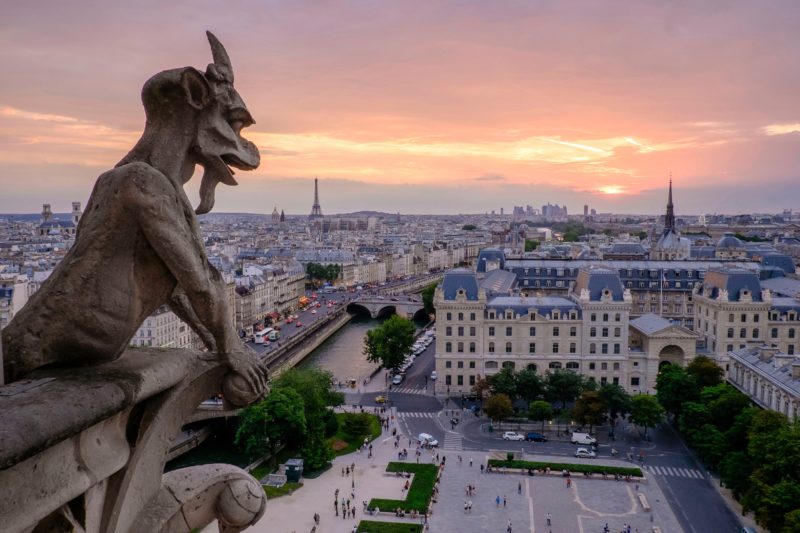 When Bishop Barron visited Denver recently he spoke about having his world “rocked” by great beauty and truth as a teenager and lamented that many people have not had this experience. Are we even becoming immune to the power of beauty and truth? Ultimately Jesus rocked my world when I first came to Catholic school after I had been kicked out of seventh grade in the public schools!

After that I had a powerful experience the next year when I was able to visit France for the first time. I would say that the beautiful churches, art, cuisine, and holy sites rocked my fifteen-year-old world! Europe does that to you! I went on to study abroad in Poland the next year and then a semester in college. I really look forward to helping my kids to experience the glories of our culture and to lead pilgrimages to help others to do the same. This is why I’m leading my first cultural pilgrimage this October, which begins in Paris.

When you think of Paris, Catholic culture may not immediately come to mind. You might think of the Eifel Tower, Napoleon’s L’Arc de Triomphe at the end of the Champs-Élysées, good food and wine, and maybe even the guillotine. However, Paris is truly a city of saints and great Catholic culture.

First of all, Paris is the center of the one of the great nations of Christendom. The Franks made Paris a base of power and a residence of kings. Their royal crypt was under the Benedictine Abbey of St. Denis, just north of the city. The advisor to two kings, Abbot Suger, reconstructed the Abbey church in the twelfth century, innovating a new style—making St. Denis the very first Gothic church. The Gothic style emphasizes brightness and height, as Suger explains: “The dull mind rises to the truth through material things, and is resurrected from its former submersion when the light is seen.” St. Denis still contains the royal crypt, where St. Louis of King of France is buried.

Speaking of St. Louis, the king-saint constructed a small Gothic chapel, Sainte Chapelle, one of the most brilliant places in the world, illuminated by ceiling tall stained glass, to contain relics of Our Lord’s Passion. It was completed in 1248, almost one hundred years before the great Notre Dame Cathedral was finished. A medieval writer described Notre Dame as shining out “like the sun among stars.” The flying buttresses and rose windows dazzle. This church definitely rocked my world during my first visit to France!

Paris has modern saints as well and two are buried only a few blocks from one another, on the left bank of the city. St. Vincent de Paul’s relics are displayed in a glass case above the altar of a chapel dedicated in his honor. St. Catherine Labouré is buried nearby within the shrine of the Miraculous Medal, where she received apparitions from Our Lady. And to complement the great Gothic churches, there is a more modern basilica, the Basilica of Sacré-Cœur (Sacred Heart) on on Montmartre, which hosts perpetual Eucharistic adoration. Towering over the city from its highest point, it was built in the late 1800s as a spiritual response to the disaster of the Franco-Prussian war.

We can also see Catholic culture literally on display in two monumental museums. The Louvre is the world’s largest art museum, taking the visitor through the entire history of Western Civilization, from the classics to the present. The building itself is worth the visit, built originally as a castle and becoming the main residence of the royal family. The Musée de Cluny specializes more in the Middle Ages, with the famous “Lady with the Unicorn” tapestry as a key part of its collection. In an historical building as well, this museum was the old Cluniac house in Paris, a key center of medieval Benedictine life.

If you want to see these sites, we’ll be spending three days in Paris during my Saints, Monks, and Beer pilgrimage this October 19-29. All of these sites are on the itinerary! Find out more information on our website. Come and have your world rocked!

Now Is The Time of St. Joseph