Now Is The Time of St. Joseph 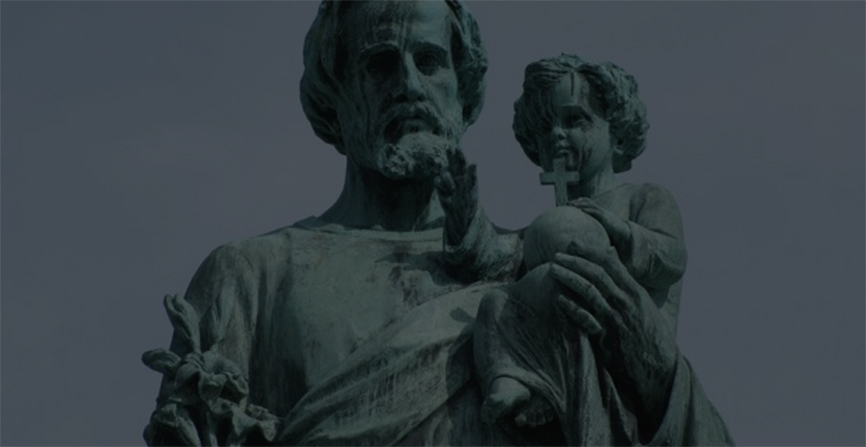 Men, it is time to turn earnestly to the protection of the great St. Joseph.

When Egypt experienced a great famine, “Pharaoh told all the Egyptians, ‘Go to Joseph and do what he tells you’” (Genesis 41:55).

The world is experiencing a great, moral famine. The Popes have told us: “Go to Joseph, Son of David.”

Devotion to St. Joseph has been steadily gaining momentum for over a hundred years and is desperately needed for our time. The Church is the Body of Christ and Joseph was appointed guardian of Christ and head of God’s household. He is the Patriarch, like the first Joseph, who through his vigilance saved the world from starvation in time of famine. The Popes have pointed us to Joseph consistently in the last 150 years, indicating that we need his protection and support in the midst of our moral famine.

In 1889, Pope Leo XIII wrote an encyclical on St. Joseph, Quamquam Pluries, asking that a prayer to Joseph be added to the rosary during the month of October (see below) and that the month of March be kept in honor or St. Joseph.

In 1955 Pope Pius XII erected the Feast of St. Joseph the Worker to be celebrated May 1st to counter act Communist May Day celebrations. Essentially, he asked St. Joseph to counteract the false ideology of work and politics overtaking the world after World War II.

In 1962 Pope St. John XXIII added Joseph’s name to the Roman Canon, followed by Pope Francis’ inclusion of Joseph in all Eucharistic prayers in 2013 (thank you, Pope Emeritus Benedict for putting that one in process).

First: “The Story of Knock began on the 21st August, 1879 when, at approximately 8 o’clock in the evening, fifteen people from the village of Knock in Co. Mayo, witnessed an Apparition of Our Lady, St. Joseph, St. John the Evangelist, a Lamb and cross on an altar at the gable wall of the Parish Church.”

Second, the Miracle of the Sun: “After our Lady had disappeared into the immense distance of the firmament, we beheld St. Joseph with the Child Jesus and Our Lady robed in white with a blue mantle, beside the sun. St. Joseph and the Child Jesus seemed to bless the world, for they traced the Sign of the Cross with their hands.”

Third, recently approved apparitions in Itapiranga, Argentina:  three Sacred Hearts: Jesus, Mary and Joseph: “My son Jesus and I, your Mother, desire that the whole world be consecrated to the most chaste heart of St. Joseph.”

Why this building momentum in devotion to St. Joseph? I think it may have something to do with what Sr. Lucia described as a pivotal moment: “The final battle between the Lord and the kingdom of Satan will be about Marriage and the Family.” One of the main victims of this battle has been fatherhood. Devotion to the chaste heart of Joseph the worker may be the antidote to the crisis of manhood we face in our culture.

He is the model of fatherhood and of forming a home through prayer and work. As Pope Benedict taught:

Joseph fulfilled every aspect of his paternal role. He must certainly have taught Jesus to pray, together with Mary. In particular Joseph himself must have taken Jesus to the Synagogue for the rites of the Sabbath, as well as to Jerusalem for the great feasts of the people of Israel. Joseph, in accordance with the Jewish tradition, would have led the prayers at home both every day — in the morning, in the evening, at meals — and on the principal religious feasts. In the rhythm of the days he spent at Nazareth, in the simple home and in Joseph’s workshop, Jesus learned to alternate prayer and work, as well as to offer God his labour in earning the bread the family needed.

My own relationship with St. Joseph has been growing. About eight years ago I heard the Lord moving me to accept him as a father figure in my life. Although our spiritual life is ordered toward our heavenly Father, Joseph provides a near perfect model of receiving and giving the Father’s love: he is a human image of the Father. He has been a constant guide and intercessor for my work, constantly fluctuating housing situation, and family life. He is an inspiration for chastity, fatherly care, spiritual silence and obedience, and faithfulness at work. I never tire of recommended his intercession to everyone no matter the problem and he has proven the power of his intercession.

If we as Catholic men are going to reflect the love of the heavenly Father, we need a model. If we are going to learn to be better stewards of our work and family, to be men of prayer, justice, and integrity, it is clear: we need to go to Joseph.

To thee, O blessed Joseph, we have recourse in our affliction, and having implored the help of thy thrice holy Spouse, we now, with hearts filled with confidence, earnestly beg thee also to take us under thy protection. By that charity wherewith thou wert united to the Immaculate Virgin Mother of God, and by that fatherly love with which thou didst cherish the Child Jesus, we beseech thee and we humbly pray that thou wilt look down with gracious eye upon that inheritance which Jesus Christ purchased by His blood, and wilt succor us in our need by thy power and strength.

Defend, O most watchful guardian of the Holy Family, the chosen off-spring of Jesus Christ. Keep from us, O most loving Father, all blight of error and corruption. Aid us from on high, most valiant defender, in this conflict with the powers of darkness. And even as of old thou didst rescue the Child Jesus from the peril of His life, so now defend God’s Holy Church from the snares of the enemy and from all adversity. Shield us ever under thy patronage, that, following thine example and strengthened by thy help, we may live a holy life, die a happy death, and attain to everlasting bliss in Heaven. Amen.