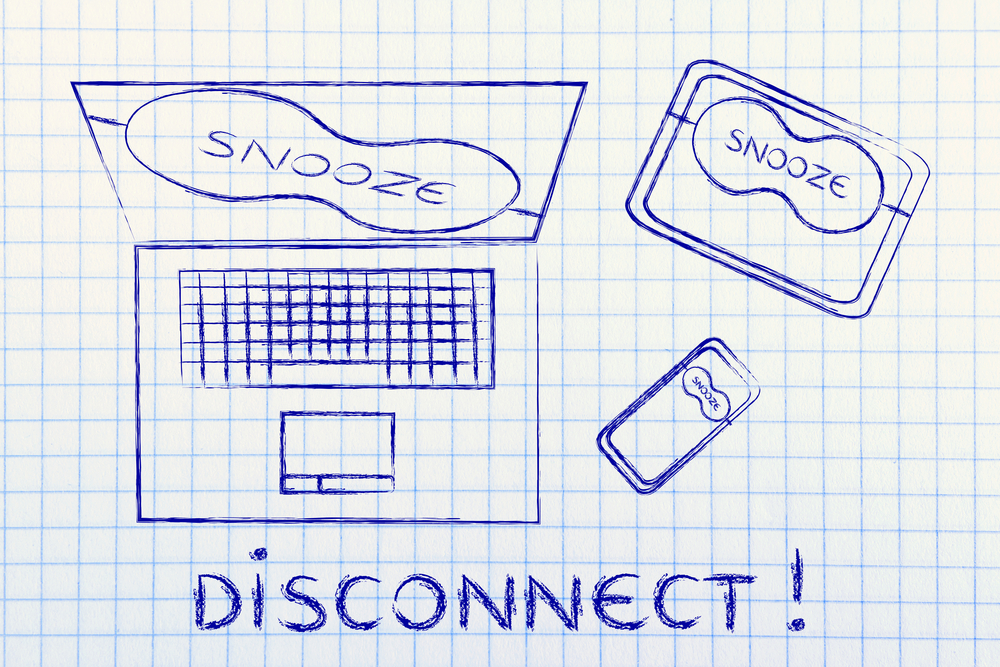 The world inside our technologies is not the world. It is a construct of man. It can represent and inform us about the world, but it is not an encounter with it. The real world was made by God and is experienced through the senses, in the flesh, not through the medium of media.

There seems to be an encroachment of the world made by man into the world made by God. We’re increasingly distant from actual things – our eyes and ears plugged in all the time. Even our hands are tied up now swiping on our phones, and the new advent of virtual reality and similar technologies will very likely completely absorb our senses as the next addictive device (especially since gaming and pornography are on the cutting edge of that VR). It seems that a complete cutoff from reality is closer than we imagined.

To illustrate just how fast technology is advancing, just consider that when President Obama took office there was no iPhone. He was also for traditional marriage between man and woman. The two facts are related, because it was alongside the rise of the un-reality within our devices that helped us to persuade a nation that two men can claim the same fecund reality as a man and a woman. The redefinition of marriage could not have happened without the redefinition of reality within our technological world.

Because technology produces an inner noise, it disrupts the reflective silence necessary to hear, discern, and relish truth. In the foreseeable future our beliefs and convictions will continue to be based not on the truth that ideas and reality convey, but on those things manipulated and orchestrated by the elite and the powerful.

The common sense of things like right, wrong, justice, and objective truth are not easily undone in the common man, unless that man be fed a constant diet of manipulated information that fits the values you wish him to adopt. Media increasingly does not reflect public opinion but shapes it. But just the noise of technology disrupts our perception of truth while it artificially props up our egos. Wayne Allensworth puts the harm succinctly:

Artificial reality lends… a sense of omnipotence. The first casualty is wonder and, with it, awe. The religious sense is dulled. Who needs God when each is his own god, his own creator, transforming and reinventing the all-powerful self? Who needs neighbors or community, when one has ‘friends’?

Joseph Pieper wrote prophetically about the dangers of banal entertainment in the ‘80’s, before the internet was humming in our homes and pockets. In his small but powerful book The Virtues of the Human Heart, in the section on temperance, he warns against the intemperance of the eyes and senses – “concupiscence of the eyes”. He warns that unrestrained stimulation and amusement will dull us to reality, making us unfit and unable to attain to the truth of things, because it robs us of the inner and outer silence necessary to attain to wisdom. Its hard to believe he did not know yet of the internet, because he offers an eerily apt description of its banality and danger:

The ‘concupiscence of the eyes’ reaches its utmost destructive and extirpative power at the point where it has constructed for itself a world in its own image and likeness, where it has surrounded itself with the restlessness of a ceaseless film of meaningless objects for show with a literally deafening noise of nothing more than impressions and sensations that roar in an uninterrupted chase around every window of the senses [consider the endless “feeds” of social media]. Behind their papery façade of ostentation lies absolute nothingness, a ‘world’ of at most one-day constructs that often become insipid after just one-quarter of an hour…

Because technology cannot point beyond itself, it can only point back to us; creation points to a Creator and inventions point to inventors. The modern era and its reinvention of humanism removed God as the alpha and omega, the beginning and end of things, and put man in God’s place. Technology rightly followed on the heals of this new humanism because we make the technological world and that world points back to us – we are the alpha and the omega of the un-reality we’re living in. It is fitting that the holy image of the technological world is ourselves: pictures of people taking pictures of themselves (“selfies”) – and how we love to check in and see what tokens of adoration people have given the sacred images!

Our un-reality seems too big to fail, so we don’t even have the sense to question or resist it – we just live in it, sometimes knowingly to the detriment of a more fully human life in touch with nature, people, and God. In countless conversations I’ve heard people express their desire to escape it, but they fail to define the escape route.

I am not a Luddite. I am typing this on a laptop. Virtual reality will be used not just for pornography but to rehabilitate and treat the physically and mentally ill. We cannot know the information of the Russian invasion of Ukraine by going on a hike. Yes, Facebook helps you find and communicate with long lost relatives. So of course there are unimaginably wonderful aspects to our uniquely human ability to create new technologies.

But the technologies that can bring us into global villages are very obviously making us village idiots as well. The web of information connects, yes; but it also entangles. If we want to have true wisdom because we have a firm grasp on reality through real experience, our lives cannot be in touch with technology from the early morning hours until we finally breakaway late at night for some imprudently delayed sleep. If your daily routine does not include inner silence and an outer encounter with real things, then you need to temper your habits immediately. Pieper advises as much eloquently:

If, therefore, a fraudulent world of this kind threatens to overrun and conceal the world of reality… [man must] resist the nearly inescapable temptation to indiscipline with all the power of selfless self-protection1, [radically closing off] the inner space of his life against the pressingly unruly psuedoreality of empty sights and sounds – in order that, through and only through this asceticism of perception, [man] might safeguard or recoup that which truly constitutes man’s living existence: to perceive the reality of God and creation and to shape himself and the world by the truth that discloses itself in silence.

We do not have to reject technology to resist its encroachment into the “inner space” of our lives. A simple examination of our habits could be this question: would our day be fulfilling and fruitful if the power and the Internet went down? Perhaps you have strict times in which to check emails, or maybe you have a docking station at home for phones so that you neither text nor scroll in the presence of your friends and family (especially your children). What is critical is that we have a regular and sustained encounter and presence in life itself. Perhaps this article could be the last thing you read on a screen today. Either way, we can clearly no longer go with the flow of things. What’s your escape route?

Bio: Jason Craig works and writes for TCM from a small farm in rural NC with his wife Katie and their four kids. Jason is the Executive Director of Fraternus and holds a masters degree from the Augustine Institute. He is known to staunchly defend his family’s claim to have invented bourbon.

The Call To Folly: Discerning God’s Plans For Your Life