COVID and the Screening Out of Christian Culture 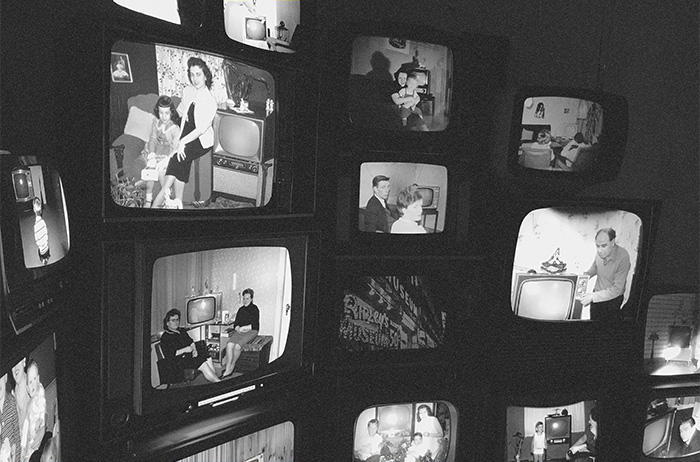 The famous phrase “the medium is the message” comes from Marshall McLuhan in his book, Understanding Media: The Extensions of Man. McLuhan was a Catholic and really should be more widely read in our day. The quip means that the very way that you receive something is perhaps more important than what you receive. We can thank McLuhan for his prophetic message that new media doesn’t just provide new means of culture; they are a new culture. His thesis is now proven beyond any doubt.

A new media doesn’t just have a message – it is one.

Discerning what that message is, however, can take time. Marshall McLuhan wrote in the 60s about electronic media. Perhaps by now we can begin to get a glimpse of its message. Unless of course its message is simply to erase all others.

Thus, if McLuhan was right that new forms of media displace old and therefore reshape a society, we need to acknowledge that screens have largely displaced reading, which has been the cultural mode of communicating for centuries, stretching back long before the printing press. And I’m not just talking books. Newspapers, magazines, and more have all been forced to go online. We had a culture of reading on paper. Now we have one that reads on a screen.

Screens are not making us illiterate, because while most of your scanning online contains images, words still predominate. We read all day on our screens. Yet it does lower our ability to be literary, to have the patience and habit of mind that it takes to read words on a page deeply (which is undeniably argued in The Shallows by Nicholas Carr). The more we scroll, the less we can read print, because it is a wholly different – even if comparable – media and, therefore, a wholly different message.

We have not taken a true stock of what this means for us as Christians. It is hard to exaggerate how important books and reading have been to the rise of Christian culture, and it seems equally true that the rise of the screen is much more of a displacing media than a communicating one. The fact that after the lock-downs, we went to screens to be “liturgical” at home instead of tangible things like the breviary, shows a tidal shift in thought and practice.

Just consider that our most sacred acts – the liturgies of the Church – require the presence of books… and their presence is not just for instruction. The books themselves are a part of the ceremony, being elaborately and beautifully clad, carried in procession, incensed, and kissed. They don’t just contain a message – they are one.

The truth of our faith is contained in books and communicated through and with them. I know there are priests that pray their breviaries with a phone, but can you imagine a procession with a tablet to be kissed and incensed after the Gospel? Why not? At this point at least that still seems unlikely, but if that is so we need to think through the logic of it.

Books have also been central to our private prayer and growth and to Christian culture itself, which derives most intimately from the quest for God in the monastic vocation. In The Love of Learning and the Desire for God, Jean Leclercq, OP shows how closely linked Christianity is to literary culture, so much to say that Christianity itself is a literary culture.

In the earliest monastic rules, for example, even the lowest in society are welcomed into the monastery, but there is a presumption that they know how to read, or plan to learn. How else will they fulfill the rule with its near constant return to the written word in the meditations, public reading, and liturgies? It is from these monastic centers, where ancient texts were read and preserved, that civilization regrew after the fall of Rome. Western and Christian civilization cannot be conceived without the lifeblood of the monasteries, and their fuel was their books.

A peasant in medieval France may have been illiterate and too poor to own books, but they knew the treasury of their culture was in them.

For the monk, as for the Christian, we grow in holiness by intimacy with the word of God, which is both a person and a book, Sacred Scripture. By the time we arrive at scholastic writers like Aquinas, Christian truth is clearly understood to be something communicated to the intellect especially, that unique quality of man not shared with the rest of creation. The words on a page are not only informative, but “a means of salvation,” as Leclercq put it.

Even when we speak of the lessons taught in nature, Christians like St. Bernard called it, “the second book of God” after Sacred Scripture.

When Christ returns, He will break open scrolls and read from the “Book of Life” (Rev. 3:5), a book that contains the names of God’s people (Phil. 4:3).

From Page to Person

It would be foolish to conclude, therefore, that Christianity is only about books. Catholicism is not bookish in the ways that Protestantism or even Islam is, even if in the Koran Christians are called “the people of the book.” The sacraments of the Church and the unyielding belief in the Incarnation of God make it impossible to focus so heavily on the intellect as to forget the “real world.” We are not foolish enough to think that true religion can be communicated by “the bible alone.” A book is nothing when alone. We worship with books, but we don’t worship books.

The Christian life is one of learning to be fully present and docile to God and to, for the love of Him, be fully present to our neighbor. Books have arisen alongside the Faith because they help us do that. The practice of reading, in the Lectio Divina for example, is a discipline that trains the mind’s eye to see, recognize, and dwell in the truth. That gives birth to action, especially caring for those near us.

You might have experienced this when, after times of deep and focused prayer, you “see” your neighbor more clearly as one lovable because they are made by God. After a good morning meditation, I have a much easier time being patient with raucous kids. Being present and disciplined with the words of truth in the silence of reading helps you make the jump from page to person. Without the former the ladder would be more difficult.

Patricia Snow wrote a great piece that helps us understand why the scattering nature of screens uproots the “undivided attention and real presence” that are cultivated in things like prayer and reading, but “are vulnerable to the distracting eye-candy of our technologies.” Screen time can literally have the opposite effect as books, actually drive us to dislike others, or delight in their virtual torture.

Typically, we all criticize the other for their obvious addiction, but few of us are willing to recognize the disarray the screen causes our inner man and how the lack of ability to focus and ponder cripples our ability to be fully present to grace and to neighbor, let alone rest and delight in the truth.

After Covid it seems the screens have become almost a total reality. It gives all.

I say his has become “total” in this age, because with the lockdowns came the rise of online liturgies, of Mass and even adoration. We have unreflectively accepted something profoundly different about being a creature when we are able to kneel and gaze at a screen in order to “see” a sacramental reality displayed. The fact that we didn’t simply build home altars, pray the psalms, and meditate on scripture was telling. The need for Mass is one thing, the thought that it could or should be viewed online is another.

One bishop said he “expected” his flock to be “present” at online Masses. I am not criticizing those that found comfort in seeing their parishes on the screen. It was a very reasonable reaction. It seemed inevitable, even if we didn’t see it coming. I cannot discount wholesale a friend’s profound experience of “adoration” during an “online holy hour.” But I also have to put all of that in quotation marks, because it is something altogether different than being present with the Body of Christ in His people and His Real Presence. Almond milk is not milk. Websites are not sites, places, or pages. And that “adoration” is not adoration as understood by the Church and her experience and doctrine.

When you watch adoration you have not gone to adoration.

The paradox of our faith is that God is everywhere, but that doesn’t mean He is present in the same way everywhere. He bids us to gather. Yes, shut yourself in your room, alone with your Father, as Our Lord says (because place matters), but know that He is present uniquely when people are gathered. It matters that John was at the cross and Peter wasn’t.

You might have noticed that shortly after the whole world went home and went online, Those Catholic Men went dark. We haven’t been posting for months. Yes, our old friend busyness has crept in, wife’s pregnant, blah blah. But I also pivoted away from screens when all the Masses went online. Something has happened that is frightening on some intuitive level.

In light of it all, I have also been working hard on expanding the Sword&Spade magazine apostolate, which is heavily focused on reading. In the last season we’ve expanded into sending out books and working more to orient the work toward getting men reading and praying in their local places. The scattering and confusion of man seems to be happening through the screen, and something in me says the sane will be the ones that are able to delight and live in the truth as the city walls are breeched. This was essentially the Christian strategy when the ancient civilizational powerhouses were crumbling. I imagine there’s some wisdom in it for us today.

I think we men need the virtue of studiousness more than ever, which is the focused discipline of the mind. Like Theresa of Avila, I’m scared to go into that discipline alone without a book. In a world starved of presence, surely we can re-learn the habit of it through deep reading, and be more able to gaze on a world with the love of God. I’ve been following the Catholic media world loosely, scandals and conspiracy theories and all. It’s interesting. Sometimes I’m glad to know something about why things are as they are. But I need something else, a completely different media and message, to gain hope and be prepared to give witness to it.

It seems that what we really need to know right now has already been written down. I don’t think another Tweet will place hope within me, let alone make me ready to speak about it to my neighbor who, without Christ, is surely more fearful and hopeless than I am.

Why Giving Makes You Happy