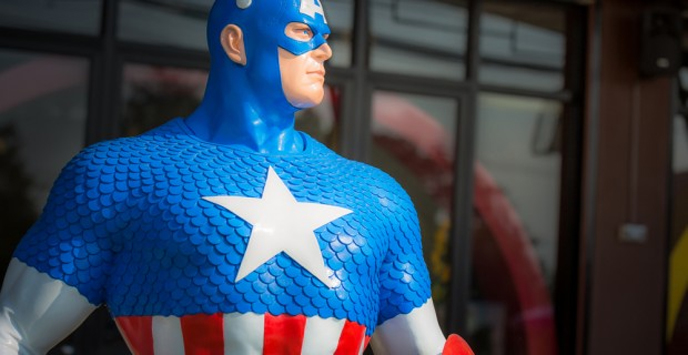 I recently saw The Avengers: Age of Ultron. Besides being unbelievably successful in worldly terms as far as box-office stats, the new Avengers movie is surprisingly more than just comic book action and cheap lusty thrills. As I was watching the movie on the big screen I was impressed by the beauty and power of the special effects and I was aware of the Christological aspects of each of the male characters in the movie. Christ himself was the perfect model of manhood and each of us is called to imitate and manifest the manhood of Christ in our own lives. It’s beautiful to see how the male characters of The Avengers: Age of Ultron each show us the different aspects of the Incarnation and the mission of Jesus Christ.

First, Captain America. In Age of Ultron Captain America suffers a mind-altering attack which reveals to him one of his greatest fears. We come to find that Captain America is afraid that he has missed living a normal human life with a wife and kids due to the cryogenic freezing process he underwent to survive into the 21st century. In a sense this is the fear of every man who is called to live a life of celibacy for Christ. Jesus himself never knew the joy of having a normal life with a wife or children; he was celibate and perfectly chaste. Our Church also has men who live a life unique in order to open the doors of grace and to lead us into the life God. Captain America is celibate, for all intents and purposes, in the movie and also assumes the role of leader for the Avengers. Christ was a celibate man who led his apostles and disciples non-violently in the fight for world peace against the ultimate enemy of mankind, Satan.

Second, Iron Man. My interpretation of the Christ in the character of Iron Man is fairly superficial, but aesthetically pleasing for those with a poetic and artistic appreciation, which is very important for reading the Bible and understanding religious art. My insight is simply this: Iron Man defeats most of his foes by shooting them with a powerful laser beam which comes out of the holes in the hands of his suit. The image of the holes in the hands should remind us of the wounds in the hands of Christ, which he shows after his Resurrection as trophies manifesting his victory over Satan and death. St. Ignatius of Loyola was also a big proponent of meditating on the wounds of Christ in order for the Christian man to overcome the evil in his life.

Third, Thor. The character of Thor in the comic and movie series is the son of the ruler of the nine realms, which sounds a little like the son of a god. The new Avengers movie makes a big deal of how Thor is the only one who can lift his weapon hammer. He makes the comment after all the other Avengers have tried to lift it, that none of them were “worthy”, implying that he alone is worthy. This should echo in our minds the time when the disciples in the Acts of the Apostles rejoiced because they were found “worthy to suffer” for the name of Jesus. In the mind of the early Church only those who were “worthy” suffered the glory of martyrdom, and it was seen as extremely prestigious and privileged. This was because only Christ was worthy to carry the cross and die on it in order to redeem the entire world of sin. In Thor we see this son of a god wielding a weapon that only he can use in order to destroy the enemies of mankind.

Fourth, Hawkeye. Clint Barton is the real name of Hawkeye in the storyline of the Avengers. In the Age of Ultron we find out that Clint has a wife and three children, one still in the womb. After the Avengers suffer a humiliating defeat and the Hulk goes crazy destroying a city in Africa, they are forced to hide from the world as wanted criminals. Clint takes them to his family’s house in the middle of an Edenic countryside far from the concerns and dangers of the world, so that the Avengers can rest and recover. Hawkeye is a superhero with a fruitful wife, happy children, and a safe place for healing and right order. In this character I see Christ the groom and his bride the Church. Jesus makes his wife the Church fruitful with new life through Baptism and the other sacraments. Jesus also builds his Church to be a place of healing and good order. Every man is called to imitate our Lord by sub-creating the same circumstances in his own family and household as well.

Fifth, Quicksilver. Pietro Maximoff is an orphaned twin from Sokovia. He begins this movie on the wrong side, because he has an axe to grind against Iron Man, Tony Stark. Eventually he realizes Ultron’s intentions and has a change of heart, a conversion, and joins the Avengers in saving his hometown and the earth from Ultron’s evil plans for total annihilation of the human race. Throughout the movie we are impressed by Pietro’s incredible speed and strength, but they are used quite selfishly until he converts and decides to help the Avengers instead of Ultron. Where are we focusing our time and energy? Toward our own plans or toward the battle that Jesus is inviting us to fight with him.

Finally, in one of the most moving scenes in the movies, Pietro runs in front of Hawkeye and a little Sokovian boy in order to take the bullets that are aimed at them from a stealth jet above commandeered by Ultron himself. At first Hawkeye and the little boy can’t believe they’re still alive and then they look down and we see Quicksilver’s body riddled with giant bullets. This is true manhood. This is the perfect imitation of Christ; laying down one’s life so that others may live.

Sixth, the Vision. I found this character to be the most attractive and intriguing of all. According to the Marvel comics the Vision is technically a synthezoid. He is a synthesis of human tissue, the metal vibranium, and artificial intelligence. He seems to be the best of the human and the best of the robot world together in one. I think this is as close as comics will ever come to mimicking the Incarnation. Just as the Lord Jesus was man and God, in the Vision we see a being who is man and something foreign to human experience. God is the ultimate other. God is ultimately foreign to our fallen human experience, unless He reveals himself to us as He has done in Christ. The Vision also calls himself “I am” which is an obvious reference to Exodus and the Gospels. Some say this is blasphemy, but it could be an invitation to read the character at a deeper level too.

The Vision was also created originally by Ultron to be an enemy of mankind, however we see good coming from bad when the Avengers are the first people the Vision meets after he comes to life, and he decides that mankind is good and worth defending and fights against Ultron. This is the same attitude of our Lord, which leads Him to die on the cross for our sins and to rise from the dead in order to demonstrate the definitive power of God to bring good out of bad. Ultron wants to destroy mankind and make his own world; the Vision wants to save mankind and insists that “there is grace in their faults”. Sounds much like Satan and Jesus.

Finally, there is a magnificent battle scene when all of the Avengers are fighting Ultron’s evil robot horde in an ancient church. The cinematography captures all of the different Avengers fighting together to defend the trigger that will end it all. That trigger just so happens to be in the middle of what appears to be some type of Russian Orthodox church. This spoke volumes to me of the purpose of the Church. Each of the Avengers were using their individual gifts and powers inside the church to defend her and to defeat her enemies. It is only in the Church that we find true unity and diversity. The Avengers struggle to work as a team throughout the whole movie until they are united in the church. This is true for our lives as well.

Is the new Avengers movie the best movie ever? No. But it does have some interesting characters who reveal to us the many facets of the man Jesus Christ. I am not suggesting that we imitate the men in the Avengers, but I point to Jesus Christ himself who in shadows and pieces is present in the individual men of the Avengers. Jesus is literally present in all of the baptized, and it is our call and duty as Christian men to reveal Him to the world in which we find ourselves.

Taking the Risk of Faith