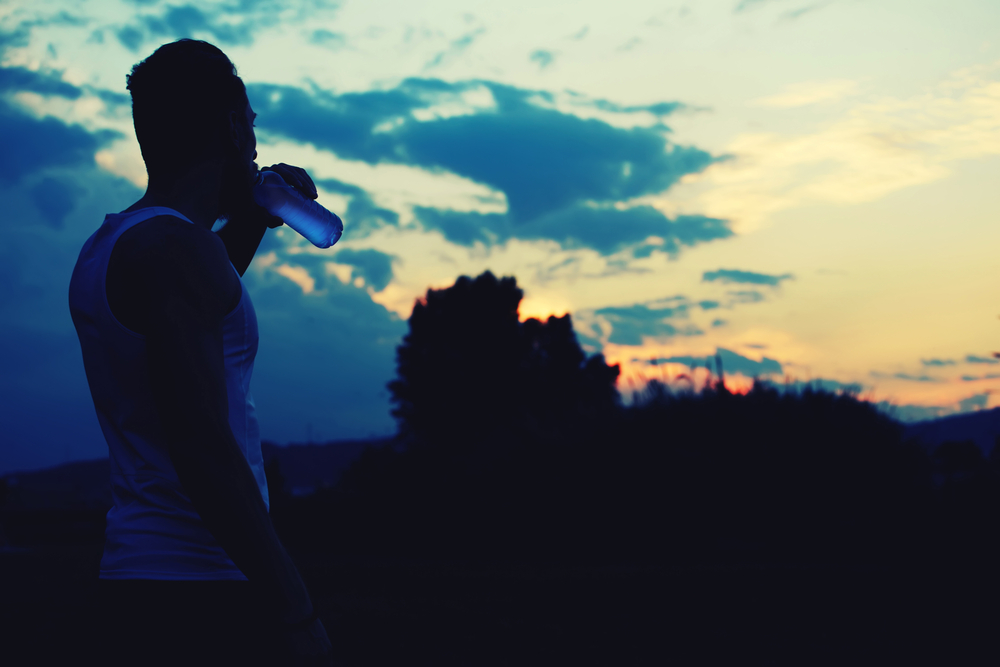 The morning was gloomy with drizzle, my lungs stung from the effort I’d already put forth and there, in the distance, I could see the shadow of my goal… the flagpole in my neighbors yard.

I had just begun the third round of my workout and there were only 50 meters left before I was able to turn around and head home for the final stretch.

I was tired… my feet felt heavy against the pavement and fatigue had officially set in. I wasn’t feeling strong this particular morning.  Not sure why… but I was laboring.

Then he struck.  The devil.

He softly whispered that it was OK to not run all the way to the flagpole.  He even told me to do a shoulder check since none of my kids (4 of them decided to get up and work out with me) had rounded the corner and so I would go unseen. I did check and the coast was indeed clear.

He increased the pressure, “Quick… turn around before it’s too late.”  My heart was racing, the lactic acid had officially set my legs on fire, and there’s no doubt I wanted to turn around.  I was so tired.

A few seconds later the moment of truth arrived.  Breathless, I whispered one word in defiance to the father of lies.  No.

No, I won’t listen to your lies and empty promises… I’m doing what I committed to.

And while the physical pain didn’t go away as I arrived at the flagpole and made the turn back I did feel an incredible rush of endorphins and spiritual strength.

A few second later I saw my son and daughters make the turn from our driveway onto the street.  I picked up my pace and high-fived each of them.  I had been victorious that cold, rainy morning and had taught my children how to do the same.

Yes, I know, the devil isn’t done with me… and he’ll surely strike again.  But, with God’s grace, I know I’ll be victorious if I simply choose to be strong and courageous.

You see, since starting my 90-day Exodus journey I’ve become aware of how truly soft and weak I’ve been for much of my adult life.  In the past, I would have definitely turned around early and squandered the opportunity to reject the father of lies, which, coincidentally, mimicked my ordinary routine of falling into the same mortal sins again and again.

And not so long ago, if you would have challenged me to give up TV, alcohol, and hot showers for 90 days I would have laughed in your face just like several men have laughed in my face when I explained what this new 90-day ascetic journey is all about.

You see, brothers, most of us are far too comfortable.  We have so much to be thankful for… beautiful families, strong careers, and enough money to make ends meet.

But sadly, what most of us don’t have is freedom.  True freedom.  Freedom from sin, freedom to say no.  We continue to fall to the same sins month after month.  And since we have the amazing gift of reconciliation, we rationalize away our weaknesses since, you know, we’ll be forgiven Thursday night after confession.

Brothers, it’s time to wake up and quit whining about how hard our lives are, or why it’s OK to be addicted to college basketball, or Texas Rangers baseball (one strike away… twice!), or our cell phone, or alcohol, or continuously falling to sins of the flesh.

Let’s take off our soft outer shells with which we’ve become so comfortable and realize the call we’ve received from The Father for true manhood.  It’s time brothers.  Say no to sin.  Say no to the chains the evil one has wrapped around our ankles, and yes to realizing the greatness our Lord wants from us.

Alone we can do nothing, but with the help of God’s grace, there is quite literally nothing we can’t do.  Let us open our hearts to our Lord, let Him take full control.  No more excuses, no more delay.  Let’s become the men we were created to be.  Our family, the Church, and society literally hang in the balance.

So, what will it be?  Will you press forward with courage or turn around early and head for home defeated?  The choice is yours.

Join the Battle. Fight for Your Freedom. Check out: Exodus90.

Ron Pereira is the co-founder of IntentionalEncounter.com, a new blog focused on helping Catholic men reclaim authentic manhood while encountering the person of Christ by gaining self-discipline through fitness, clean eating, and a renewed prayer life.

comfortexodus90freedomsintemptation
03 23 2016
Back to all articles

Why the Separation of Church & State Is Nonsense

Boys Must be Separated from Childhood to be Men