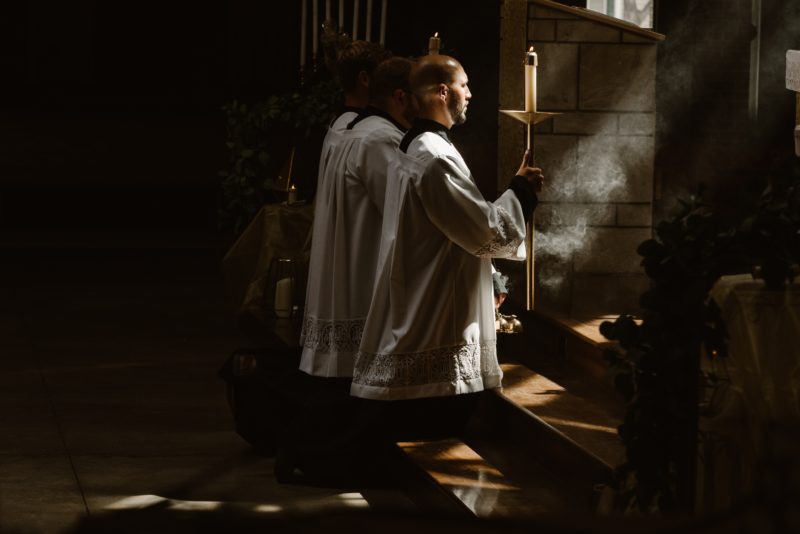 This is not a testimony of how I came back to the faith, as that is for another time. This story, rather, will pick up at the more current period of my life, as an active, practicing Catholic who is married and who is a father.

As a quick background, I’m a millennial who was born at the end of the 80s who was “sort of” raised with Catholicism in the home. My father was raised Catholic, but hardly practiced after he was given free reign when he left for college. My father begin “practicing” again, or rather, began caring about his native Faith once he caught wind that my mother was going to put my sister and I in a local Protestant day care / preschool. He “put his foot down” and decided that we’d be a Catholic family, and he’d raise us in the faith.

So, my sister and I received the sacraments of initiation in a way that’s not typical; they were received rapidly and not in any sort of catechism classes, or the commonly known term of our 90’s childhood, “CCD.” We only went through classes with the other kids our age for one year (we were publicly schooled).  Our parents didn’t pursue it after that, so, ultimately, we didn’t receive the sacraments in tandem with the other children our age.

As is the case with many Catholics, my family ceased practicing the Catholic faith once my sister and I (and then my mother) were received into the Church. My parents then divorced a few short years later, and the Faith was abandoned by all of us simultaneously.

Ever since I began to consider philosophy and theology more closely, I have been exposed to, and tend to gravitate toward, what is generally labeled as “traditional” or “conservative” Catholicism.  I don’t know that I particularly like labels per se, other than it helps distinguish categories we may be partial to, and those we don’t jive with.

As perhaps a generalization, I find that with other younger Catholic men (and women too) who care to deepen their Catholic faith, we are attracted and drawn toward what isn’t readily available in our contemporary American Church; namely transcendence and reverence. More importantly that these terms reflect the kind of Mass we crave and that our soul yearns for.

Disclaimer: I have not attended the Extraordinary form of the Mass (what people call the Latin Mass), but I have participated in a Latin choral Novus Ordo (the “New Mass”), and it was the most reverent, beautiful, exhilarating, and all around holy Mass that I’ve been to. It gave me goose bumps and damn near brought me to tears many times from its sheer beauty.

I talk to many baby boomer Catholics about this sort of liturgy, and how my soul yearns for it, and I argue that really, all of us yearn to worship the Creator of the universe in this manner; in a transcendent and reverent way. I am continually met with reactions like, “Why would you want that?” “What’s so great about using Latin- nobody understands it” “What’s so wrong with the guitar or drums in the Mass?” “What’s the big deal about gothic/baroque Church architecture?” “Aren’t you caught up in the nostalgia of the old Church?”

The common theme here is, “dude, live in the now, the Church has evolved, and you should, too.” What? I respond with a resounding “NO!” That is not it at all! My reaction is that it most certainly is not nostalgia. Firstly, I didn’t live through it, so it can’t really be nostalgia as I didn’t live through it. Many of us can say that. Many of us, to be sure, were raised in what Bishop Barron calls ‘beige Catholicism’, in churches that look like local civic buildings, don’t speak of the heavens or of the Savior of the world. We grew up in a watered-down, feel-good, be-nice Catholicism. I like to believe that we’re coming out of that slowly.

This isn’t an argument for which form of the Mass is most valid, or the correct manner in which to celebrate. No, this is more of a public service announcement, a call-out, that we thirst. We want more from the Mass because the Mass deserves it. It isn’t about what we ‘get’ out of it, and I recognize that. (In fact, it’s a struggle of mine that I have, where I find myself in a poor-quality Mass, or what a friend calls ‘Liturgical Malpractice’ and I allow myself to get caught in supreme judgment and become angry in Mass, where I ought to have my heart lifted on high and sing praises to the Lord.)

I’ve heard the Church is “listening” to what young people want.  I hope that’s true.  I think it’s our job to advocate for reverent and traditional Masses, ones bursting at the seams with beauty and awe. I really don’t know any young Catholics that are (a) serious about their faith and (b) not for more traditional and reverent liturgy.  If anyone is really listening, hear this: we young Catholics really do want Holy Mass to feel more holy.  In fact, I think it’s safe to say we want it because we need it.

Cameron hails from the Peoria diocese originally, but now resides in St. Louis with his wife and son. Cameron works as a project manager by day, and teaches Spanish on the side. He is an aspiring homesteader and writer and God willing, hopes to run a small farm in the future. He is also the editor of a blog geared toward Catholic masculinity called The Seasick Catholic (www.seasickcatholic.wixsite.com/sscatholic)

liturgyreverenceyoung men
03 15 2018
Back to all articles