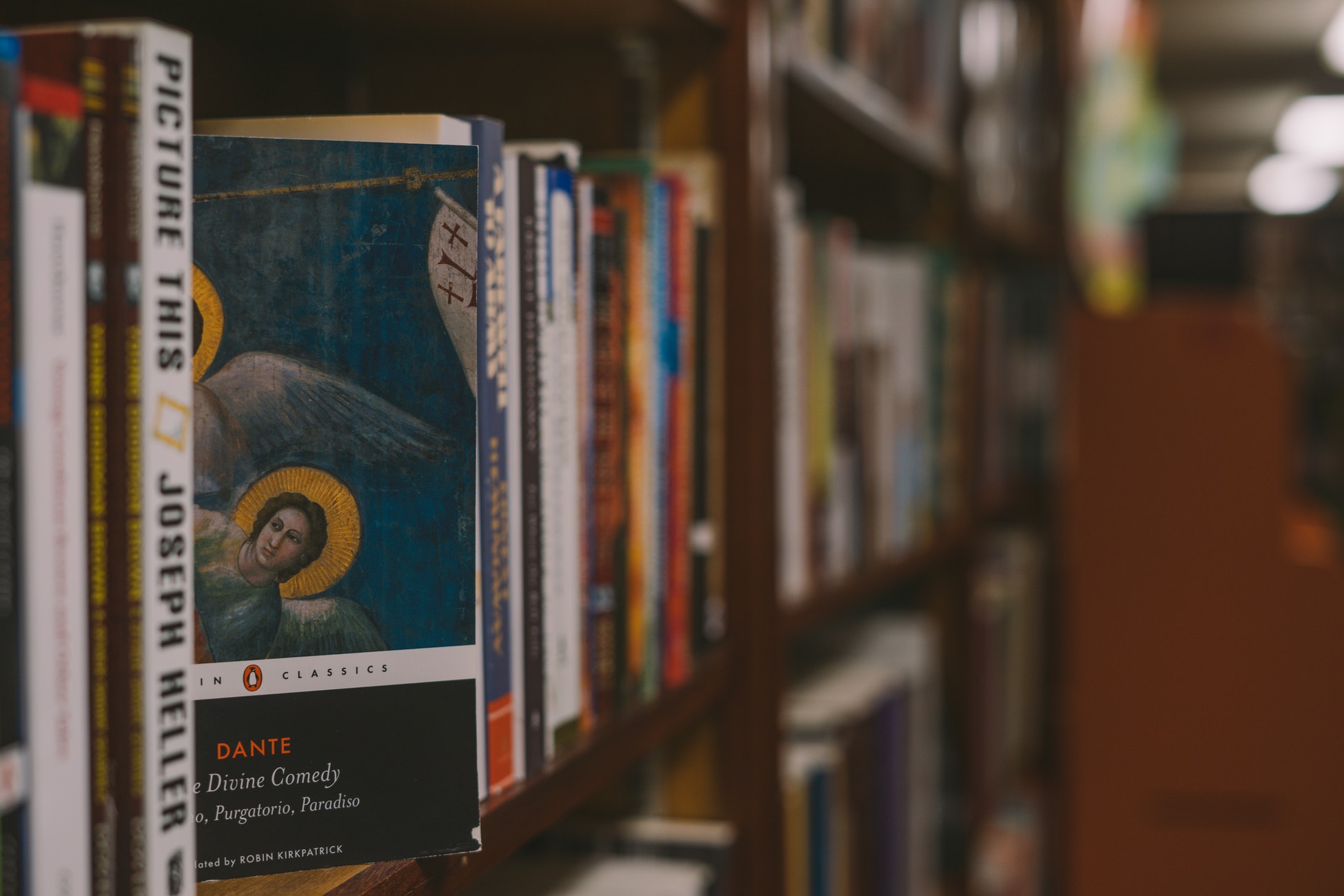 I was once reading a book in a Verizon store as I awaited a phone repair, which was apparently a significant enough oddity that multiple people made a comment to me.  I knew I was going to pass time, which is why I brought a book, but I didn’t realize that in a store of screens reading can be received as a sort of protest.  (I kind of liked that once I realized it.)  With devices full of “data” and endless access to “information” all around me – on the walls, shelves, and in every hand – having a stack of static paper pages with unchanging and limited “content” was a bit strange.  The book itself just seemed clunky compared to the soon-to-be-but-not-yet-obsolete devices.  Clearly, there is something different about a book and a data-using device.

“I like to read too,” said one woman, leaning down to grab my eyes away from the book (I was sitting, and she was standing).  I don’t recall exactly what I said, but it seemed like she wanted me to affirm that that was a good thing.  So, I did.  “But I only read true things,” she went on, “not stories and stuff.”  It was one of the comments that you know begs a good answer, but I didn’t have one ready.  I think I need to, because it does reveal something important about the way we see things like learning and wisdom.  In an industrial and technological society, we run (literally) on reducing things to their simplest parts and then profiting from them as efficiently as possible.  If we want to “learn” or “gain” something from a book, it ought not meander through the unnecessary details, but rather it should get right to the point, moral, or theme.  Get to the point.  Jump to the ending.  The rest is fluff, right?  We should only use stories to illustrate points, right?  (Like I am in this article?)

This way of thinking, which I tend to share even if I am actively rebelling against it, is an error.  Stories are more than just valuable but are invaluable.  When you lack stories, you lack something essential to being human.  True human formation requires stories.  I can assert that confidently because all of humanity and even God Himself has used narrative – stories, myths, legends – to teach what is most valuable.  Tradition and culture are not sets of facts or codes of life, but an organic and living thing that is taught most especially in story – “caught more than taught,” as they say.  Perhaps the instructions for assembling a kitchen stool should be “just the facts,” but men of wisdom and love have a broader knowledge than that, and to be loving and wise they need a broader knowledge than competency.  In fact, we should not call it “knowledge,” but call it by its proper word – wisdom.  Men with holy and virtuous characters do not gain them by mastering facts, but by living out the truth that stories and experience are pregnant with.

Some of the most important Christian apologists of the last century are known as the “literary converts,” because they received and passed on the treasure of Christian civilization through stories –G.K. Chesterton, Evelyn Waugh, Hilaire Belloc, C.S Lewis, etc.  And then there are the modern-day apologists that lean “poetic” or literary in their work – Flannery O’Conner, Joseph Pearce, Fr. Dwight Longenecker, St. John Paul II, Taylor Marshall.  There’s more to stories than you know, and that’s why you need them.

Having worked with Fraternus for over a decade now, I know for certain that there is a deep hunger within Catholic men for “better formation.”  There’s a growing awareness in men that they lack that which they are expected to give.  Many men know how to do things – the technical skill and knowledge of particular jobs – and many of them have experience in leadership.  But having skills and leading a team are not in their essence fatherly (although they can be informed by it), and it’s not always essentially manly (do most jobs require something uniquely masculine?).  A hero is more than a good manager.  A boss can be fatherly, but the reality of employment is that it is an exchange that can be severed and ended.  You can’t, on the other hand, “fire” a child or a spouse.  This is why it is in the role of mentor, brother, and father that men begin to feel acutely the need for better formation in themselves.  By seeing the eyes of a child hungry for truth they sense within them truth that is poorly known or lived.  They need wisdom for life, a wisdom that is set deeply within, making it possible to make a gift of it (to pass it on).  They need to be inspired further toward the life of a hero, not just a manager.

Thus, an essential part of this blog is to encourage men to read more.  “Reading is the horse of culture,” said classicist John Senior, “carrying the burden of the best that has been thought and said.”  Men can easily be inspired, driven, or enthusiastic about something.  But the call to fatherhood is so much more than being excited.  It requires that we learn to listen, receive, and respond with the wisdom of a man of virtue, which is a deeper, higher, and broader mode of teaching than the passing on of skills, and even knowledge.  The act of reading itself slows us into just that posture.  It stops our mind from building the next thing, taking the next step, and engineering the next solution to the next problem.  In musing with a book, a man sits within creation and the world around him, instead of seeing it as a series of problems to be solved or kingdoms to conquer.

In fact, reading things in an effort to “master” or “grasp” truths can be dangerous.  Socrates was against writing itself because by placing something down on paper, we can, in a sense, think we have “mastered” it or that we “own” it.  Samurai’s criticized the written code of medieval knights because they wrote it down.  By being able to read it alone you have the ability to abstract the “code” out of the lived tradition of a people and examine it as a dead thing, like a dead frog in biology class.  The code of the samurai was only contained within the heart-to-heart of tradition and a shared way of life.  I remember having video games when I was a boy that had “codes” in them that allowed you to bypass the challenge and experience of the game.  Sometimes I would work a long time at finding and entering the code, and then thinking, “Why have the game if you’re going to skip it?”  Today we want to “crack the codes” of life, to find “life hacks,” to bypass the “fluff” and get to the point of it all.  What if doing that makes life pointless?

We can forget that truth is deeper than just facts.  “The written text pretends to master and contain the truth,” said Stratford Caldecott, “which in reality exceeds anything one person can grasp.”  A finished book on the shelf can be a source of sinful pride if it is not fully absorbed into the memory and spirit of a man – if the truth does not transform as much as it informs.  Remember, the Word of God was made flesh and dwelt among us.  By our pride and “mastery” of things, we can tend to do the opposite – we take what is fully human and, therefore, good, and make it “captive” in our knowledge and books.  We make what is flesh and dwelling among us and make it into mere words.  There, on the page, it is lifeless.  It is in us and through us that the words take on flesh, which is why reading is good and necessary in the formation of a man, but it is not an end in itself.

All this being said, we don’t begin the path to wisdom by learning facts, but by encountering truth itself contained in reality itself, which is a thin veil revealing the glory of God.  Learning by allowing the senses to encounter the good, true, and beautiful creates an intuition that matures into good character and good conscience.  Today the internet thrives on cheap and “accessible” lists of facts that are meant to help us jump straight to doing the right thing – “7 Ways to Love Your Wife Better!” – but reductive lists and cliff notes simply fall short of actual learning.  “Life hacks” and data aren’t the soil of wisdom, but the lifeless sand in an hourglass that just gets turned over and over, creating a new void that needs to be filled as it fills the last.

Good literature does not leave a void.  It fills the mind and even the heart with the inspiration and sense or life that the brutal attitude of modern life simply forgets or denies – meaning, purpose, truth, etc.  The woman in the phone store who only wanted to read what is “true” is likely not against stories per se, but she is confused at their power.  Perhaps she has forgotten or not been told that she is part of a story herself. We were in a store, after all, that sells “data” – cold, hard, useful data.  A good book is something altogether different, and the difference matters.

Want more?  Consider subscribing to The Sword and Spade.

readingstoriestruth
03 31 2019
Back to all articles