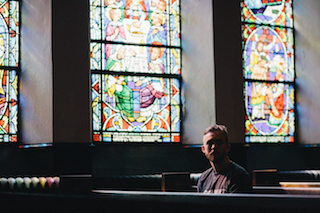 God does speak to us. No, I don’t mean in an apparition or with an audible voice. God has His own voice and we have to attune our hearts to Him to be able to hear it.

Robert Cardinal Sarah speaks of the importance of silence in hearing God’s voice:

At the heart of man there is an innate silence, for God abides in the innermost part of every person. God is silence, and this divine silence dwells in man. In God we are inseparably bound up with silence. . .  God carries us, and we live with him at every moment by keeping silence. Nothing will make us discover God better than his silence inscribed in the center of our being. If we do not cultivate this silence how can we find God?” (The Power of Silence, 22).

There are number of reasons why we may not hear God speaking to us in prayer.

Prayer can’t be reduced to a method, but that doesn’t mean that there aren’t ways of learning to relate to God. In part, methods fall short because God is a person and we have to learn to relate to Him in a personal relationship. It’s true that sometimes we need some coaching to learn how to listen to our wives! Likewise, there are some things we can do to relate better to God and to listen for His voice more attentively.

First, prayer is more powerful in the presence of the Blessed Sacrament. It is easier to listen for God’s voice when we are physically present with Christ. We come to sit at the feet of Jesus and receive His grace more abundantly from the love we show Him in the Eucharist. I have no doubt that prayer becomes more efficacious before Jesus in the Blessed Sacrament. On this point, the Catechism tell us: “Contemplation is a gaze of faith, fixed on Jesus. “I look at him and he looks at me”: this is what a certain peasant of Ars in the time of his holy curé used to say while praying before the tabernacle” (2715).

Second, lectio divina is a powerful way of praying because it is a conversation with God. In Verbum Domini, Pope Benedict describes the steps of lectio:

It opens with the reading (lectio) of a text, which leads to a desire to understand its true content: what does the biblical text say in itself? Without this, there is always a risk that the text will become a pretext for never moving beyond our own ideas. Next comes meditation (meditatio), which asks: what does the biblical text say to us? Here, each person, individually but also as a member of the community, must let himself or herself be moved and challenged. Following this comes prayer (oratio), which asks the question: what do we say to the Lord in response to his word? Prayer, as petition, intercession, thanksgiving and praise, is the primary way by which the word transforms us. Finally, lectio divina concludes with contemplation (contemplatio), during which we take up, as a gift from God, his own way of seeing and judging reality, and ask ourselves what conversion of mind, heart and life is the Lord asking of us?  (87).

In terms of having a conversation with God, it begins by listening to what God says to us through His Word. We receive the Word by reflecting on its meaning. We then speak back to God in prayer. Finally, the conversation moves into the silence of a wordless embrace by which we unite our mind and heart to God.

We Are All Farmers: A Reflection for the 11th Sunday in Ordinary Time