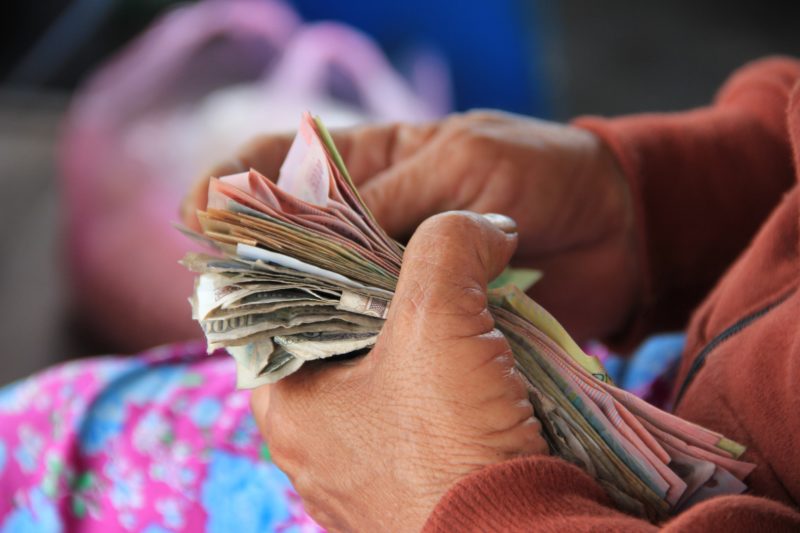 Suffering isn’t fun, but it isn’t necessarily bad.  Case in point: I’ve been battling the flu for the last week and a half, which is the antithesis of fun.  But it wasn’t all bad.  I was able to do a lot of good soul searching for my Lenten reflection while being laid up in bed.  I don’t know if it was the flu meds, the Holy Spirit, or maybe a combination of both, but a flood of pretty interesting thoughts filled my head. They revolved around answering one question: “What am I holding on to which could be more important than God?”

It seems like a silly question if we say it out loud.  After all, there’s nothing more important than God.  But hear me out.

I remember a homily given by a deacon in Alabama.  In his syrupy, Southern drawl, he recounted a fascinating segment he watched regarding how some African tribesmen use baboons to find water in the desert.  The tribesmen take advantage of the baboon’s basest instincts.  In plain view of the baboon, the tribesmen find a giant termite hill and dig out a narrow tunnel with a small pocket at the end.  They fill the pocket with delicious seeds.  Again, this is taking place in plain view of the baboon.

Once the trap is set, the tribesman walks away and hides.  The baboon sets aside any notion of safety and allows itself to be overcome by curiosity.  It scampers over to the termite hill, reaches into the tunnel, and grasps a fistful of seeds.  The baboon tries to pull its hand out but is stuck; its fist is too large to fit through the narrow tunnel.  The tribesman, seeing that his trap worked, walks over to capture his prey.  The baboon, for whatever reason, won’t let go of the seeds and therefore allows itself to be captured.  The tribesman, having captured the baboon, moves to the next step of his plan.

He ties the baboon to a nearby tree and presents it with another treat—salt.  It’s like candy to the baboon.  The baboon seems to have forgotten that it’s a prisoner and happily laps away at the salt rocks.  The baboon simply won’t let go.  The contentment doesn’t last long.  Very soon, the baboon becomes deliriously thirsty.  The tribesman lets the baboon loose, and follows it as it beelines to the hidden watering hole.  Usually, the baboon is very careful about revealing this secret location, but it is beyond parched.  It doesn’t care, even if it means sacrificing that which is regarded as most precious in the desert.

What does this have to do growing in your Catholic faith?  In my last article, “The Enemy & The Self: Lent, Strategy, and Warfare,” I wrote about how important it is to know the Enemy.  In continuation of that theme, Satan regards us no different than the tribesman regards the baboon.  To him, we’re just stupid monkeys who can always be duped by preying on our basest instincts.  Satan tempts us in plain view.  He continues to give us “treats” until we’ve forgotten that we’ve been captured, until we’ve sacrificed our love for He who is all good and most deserving of our love.

We see this trend in Sacred Scripture, especially when faced with the readings during Lent.  God pours Himself out and gives Himself as a gift to us, holding nothing back.  In return, we’re invited to join in the gift giving, except often times we find ourselves holding on to something or a whole lot of somethings and therefore can’t reciprocate.  We hold on to our pride.  We have a death grip on lust.  Name a sin, and we’re holding on to it like the baboon to the seeds and salt.

But it doesn’t have to be this way.  We’re not mere animals.  We know in our heart of hearts, we’re created in the image and likeness of God.  We just need to remember.

Here’s a simple way to remind and examine yourself – the 3 T’s with the 5 Why’s.  The 3 T’s stand for Time, Talent, and Treasure, and where you spend your 3 T’s defines that which you find most valuable in your life.  The 5 Why’s helps you to get to the root reason for why you spend the 3 T’s the way you do.  For example, you spend a lot of time at work.  Why?  Because as a husband and father, you must provide for your family.  Why?  Because, God has given you this duty and vocation, and you must live it earnestly.  Ask “Why?” until you find the root motivation.  This same line of questioning might sound different for somebody else.  I know there are plenty of workaholics who spend a their time at work because of pride; they want to climb the to the top ranks because it makes them feel good, even at the expense of faith or familial duties.  The important thing is to answer honestly.

It’s easy to say there is nothing on this earth worth more than the love of God.  But talk is cheap.  Take the time to really ask yourself, “What am I holding on to?”  Once you know the answer, Let Go and Let God.

Carlos Bersabe is a Catholic “re-vert,” husband, father, and currently serves in the United States Air Force as a Presidential Advisor and Nuclear Weapons Strategists.
He holds a B.A. in Political Science from The Citadel and an M.A. from Holy Apostles, College and Seminary in Catholic Moral Theology.  Carlos hosts his weekly podcast, “Fire Away” through WCAT Radio and enjoys writing articles related to the faith. You can find him on various social media sites as @catholicammo.
When not engaged in overtly faith-filled activities, Carlos and his family enjoy God’s creation through hunting, fishing, camping, and anything outdoors.
grasphold onkeeptruth
03 16 2018
Back to all articles