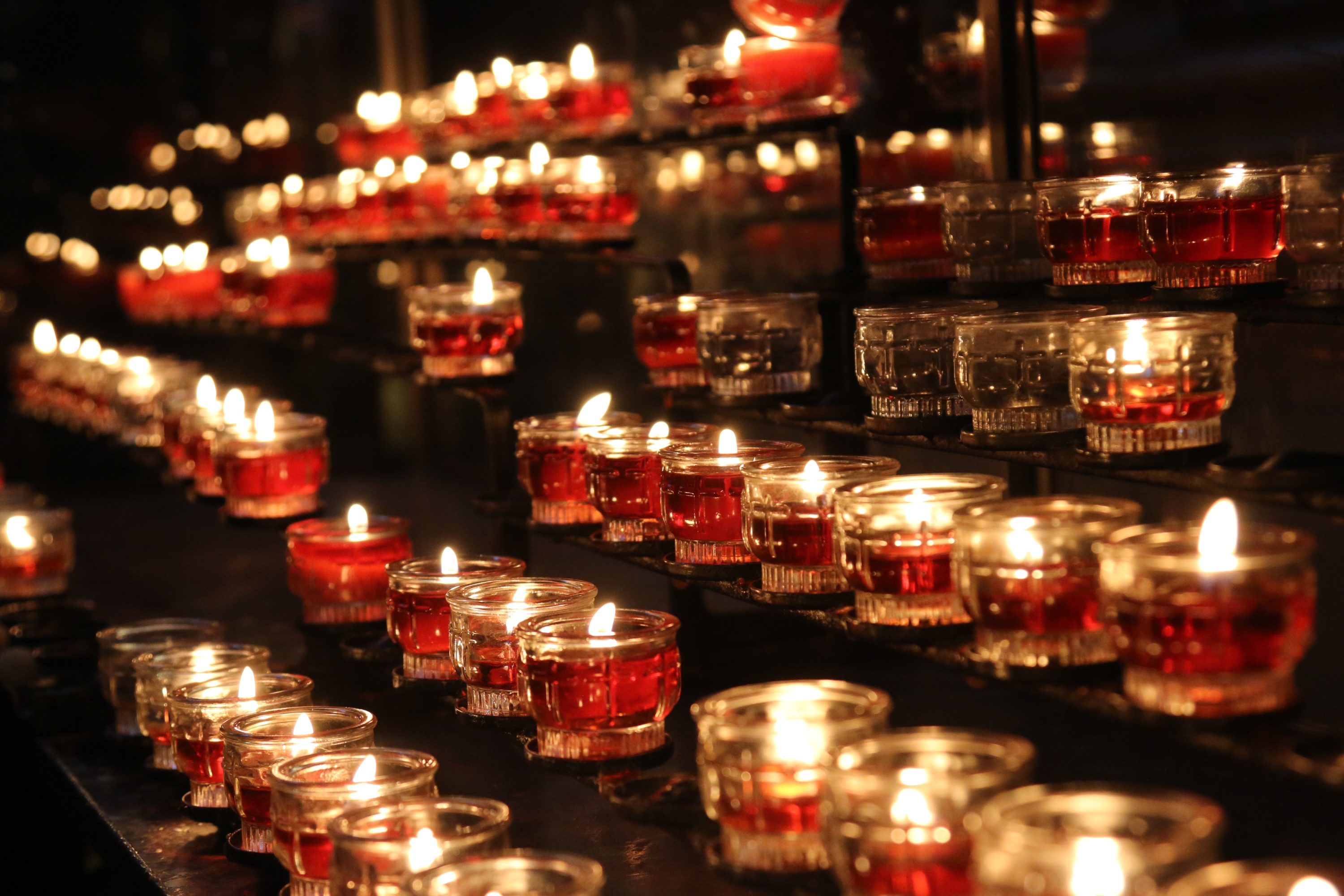 On February 2, 2018, we celebrate the Feast Day of the Presentation of the Lord in the Temple. Traditionally, this day has always been referred to as “Candlemas,” when the infant Christ Child, the very Light of the World, was brought into the temple by Mary and Joseph 40 days after His birth according to Jewish custom. Over the centuries, this is the day when candles are blessed for liturgical use, accompanying countless prayers and sacraments as they stand in fiery, silent witness to the Presence of Christ. It is also commemorated in the 4th Joyful Mystery of the Rosary.

I am always intrigued by the rows of glowing candles grouped together in the little metal stands in the corner or the back of our churches. Each one is a symbol of the Light of Christ, reminding us of Jesus’s words, “I am the light of the world. Whoever follows me will not walk in darkness, but will have the light of life”  (Jn 8: 12). Yet each candle also has its own story, representing the special intention on behalf of the one who lit it. Perhaps some money was inserted into the little slot built into the candle stand, ostensibly to pay for the candle or to contribute to the day-to-day operations of the church. As a child, I used to think the more money one contributed, the more likely their prayer request would be granted. I also used to think lighting prayer candles was an antiquated, largely disused devotion abandoned by the Church as a vestige of a pre-conciliar practice, only something done by little old ladies in chapel veils like my grandmother.

Apart from God Himself, perhaps only the person enkindling the candle knows the reason the little flame flickers in the quiet darkness. Odds are most of the candles burning away their brief 3-7 day lives, one next to the other, probably represent prayers of petition. In a very normal and faithful way, each and every one of these prayers of petition will be answered, although perhaps not according to the intention of the petitioner. ‘Yes,” “No” and “Wait” are all answers to our prayers.

How many of those candles represent prayers of thanksgiving? Intercession? Praise?

One of our common misconceptions about prayer is that if our requests are not hand-delivered to us by God exactly the ways in which we want, our prayers were not answered. Think of your own lifetime experience when, years after praying for a special intention that never came about your way at the time, you realized if God granted your prayer to your specifications, the results would have been bad, poor or tragic. I can think of a number of them myself. “Thy Will be done” will always be preferable to “My will be done.”

And yet the rows of tiny fires gleam on through the nights and days of their finite lives, extinguishing themselves all too soon. How many prayers did or will God grant according to the desires of the petitioners before each flame dies its inevitable death and the candle is reduced to nothing? Although that would be an interesting series of data annually compiled and published by, say, the Vatican’s International Bureau of Prayer Candle Statistics, the truth is only the candle-lighter and God really know.

There is a moving scene in the film “Angela’s Ashes” where young Frank makes his somewhat unexpected yet integral confession before such a candle stand beneath a statue of St. Francis of Assisi, celebrating the Sacrament of Reconciliation with a kind, compassionate Franciscan priest. In mere moments he moves from anguish and torment while confessing the sins he thinks are unforgivable to a sense of relief and joy as the priest assures him of God’s love, mercy and forgiveness. And his words, “Thank you, St. Francis” communicate the sincerity and gratitude of one who believes he is washed clean of the stains of his past transgressions as his soul is renewed and fills with the Light of Christ.

When ten lepers were cured by Jesus and only one of them, a Samaritan, returned to give Him thanks, Jesus says, “Ten were cleansed, were they not? Where are the other nine? Has none but this foreigner returned to give thanks to God?” (Lk 17: 17-18). That cured Samaritan’s candle of thanksgiving was burning brightly. I tend to think of this passage after having been absolved of my sins after emerging from the confessional, having made myself a foreign entity to God by transgressing against Him, yet returning to Him as a prodigal Son. Lately, I have given more thought to exercising my free will option to offer praise and thanksgiving to the God Who reconciles me to Himself in this wonderful sacrament of healing.

As Lent approaches, I will, once again, approach the confessional with my heavy burden of sin and emerge, by God’s grace, a new creation in Christ. But this Lent I will stop by the little candle stand and light a candle of thanksgiving in profound appreciation for Jesus forgiving my faults and shortcomings and sending me, not on my way, but on His way. Because He says “I am the Way and the Truth and the Life” (Jn 14: 6).

Almost immediately after the Beatitudes in Matthew’s gospel, Jesus tells his disciples, “You are the light of the world…Let your light shine before men, that they may see your good deeds and glorify your Heavenly Father” (Mt 5: 14, 16). Let us then, brothers, be the intentional disciples Jesus calls us to be by being lights in this dark world. Join me and that prayerful army of little old ladies this Lent and light a candle of thanksgiving. It is a powerful prayer. And it is guaranteed to be answered.

CandlemasChristChurchfeastPresentation
02 / 01 / 2018
Back to all articles