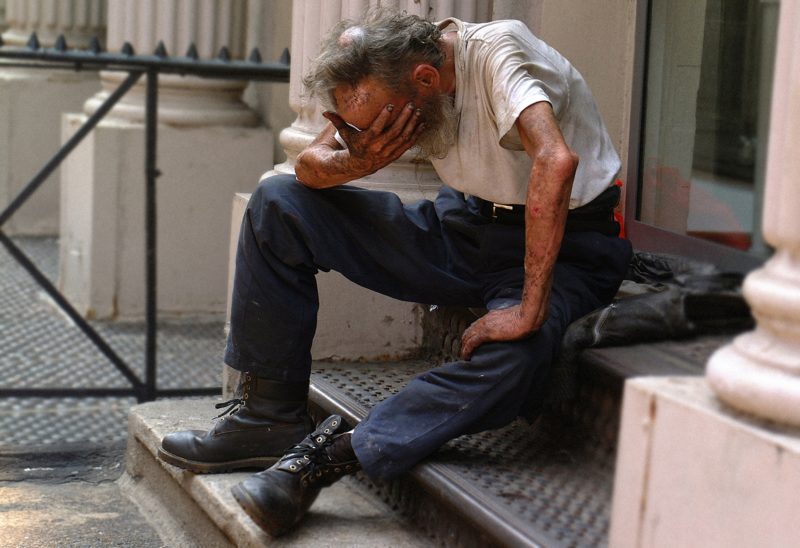 One of the cruelest banalities of soft (and false) Christianity is the idea that God alleviates the suffering of the righteous.  In America especially there’s a sense that the lessening of suffering is a sign of your election, of God’s love for you (Calvinism is hard to shake from our imagination).  If you’re not relieved from suffering – spiritual, physical, economic, emotional – it’s because you’re doing something wrong.  Just “get right with God,” and everything else will get right.  This gets communicated in a variety of ways, but the more hurtful ways are when people of “faith” repeat Hallmark-esque platitudes like:

“Hang in there; God will fix this.”

“There’s light at the end of this tunnel.”

“God helps those that help themselves.”

The reason I say they are cruel and hurtful sayings is that the person inflicted with suffering might not be delivered from their afflictions.  That might be God’s permissive will.  To proclaim their imminent relief might very well be to give them a false hope, and ultimately this could lessen their faith in God because they were misled about His ways and the reality of suffering itself.  Distorting the reality of suffering can actually distort the presentation of the Faith itself.

There are miraculous healings and deliverances, but this is not the norm either naturally or supernaturally.  The fact is: God has not removed suffering from this world though He has given us the means to have the eternal consequences of sin removed.

We do and should pray for the removal of suffering.  However, Jesus once prayed, “Father, remove this cup from me,” referring to His cross and suffering.  But God did not remove it.  This was not a sign of Jesus’ rejection.  Jesus’ great overcoming was over the power of death itself, but that happened through death itself.  Therefore, Christ has transformed suffering; He did not rid us of it.  Suffering itself has been baptized, so that offered to and consecrated to God it actually becomes the means of sanctification – it breaks the chains of sin.  Suffering is an unavoidable consequence of a world of sin, so to bring salvation to those still in the world, Christ had to change the reality of suffering itself.  As CS Lewis said in The Problem of Pain, “Christ came not to free us from our pains, but to transform them into his.”

The “trick” of faith is not to trick yourself into thinking positively about things that are negative – countering bad juju with good vibes sent into the Universe.  It is also not to pretend that suffering itself is not real, but only the improperly understood or received reality (this is the way of Eastern religions like Buddhism).  Suffering in itself is not a positive good.  All pain is not gain.  But, united to Christ and the cross, it can become a good in the soul.

“Even as I write, I am glad of my sufferings on your behalf, as, in this mortal frame of mine, I help to pay off the debt which the afflictions of Christ still leave to be paid, for the sake of his body, the Church” (Col. 1:24, Knox).

Sometimes we suffer the effects of our own sin, sometimes we suffer the effects of other’s sins, and sometimes the source is indiscernible.  But, all suffering is tied to the reality of sin – just like Christ’s suffering.  United to Him, we see that the lie that God fixes the problems of the righteous is terrible, because our suffering can actually be a sign of God’s paternal care of us:

“Be patient, then, while correction lasts; God is treating you as his children. Was there ever a son whom his father did not correct?  No, correction is the common lot of all; you must be bastards, not true sons, if you are left without it. … For the time being, all correction is painful rather than pleasant; but afterwards, when it has done its work of discipline, it yields a harvest of good dispositions, to our great peace.  Come then, stiffen the sinews of drooping hand, and flagging knee, and plant your footprints in a straight track, so that the man who goes lame may not stumble out of the path, but regain strength instead” (Hebrews 12:7-8, 11-13).

When faced with unavoidable, necessary, or even confusing suffering, we can echo Christ’s words asking that the “cup” of suffering pass.  We can pray the same with and for others.  But, as sons of a good Father, we should also always remember the second part of that prayer that was prayed before the cross: “My Father, if it is possible, let this cup pass from me; yet, not as I will, but as you will” (Matt. 26:39, NAB).  In Him, no suffering is meaningless, and we never suffer alone.

fixrealitysufferingtransformation
03 / 17 / 2018
Back to all articles

Wood vs the World: In Awe of the Created