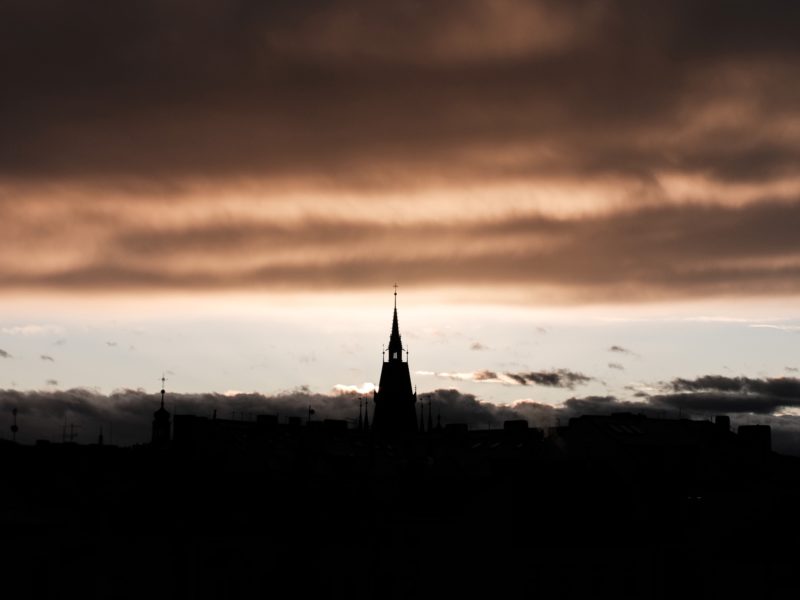 Recently Laura Ingalls Wilder, author of The Little House has been de-throned from a literary award due to some insensitive remarks about Native Americans in her books.  Many have commented well about the problem of reading history and literature from a strictly modern perspective, but the more interesting thing to me is that this is another example of modern liberal Americans showing themselves to be the enlightened pure ones and their somewhat recent ancestors as dark embarrassments – especially the colonial and religious sorts.  Southern? Oh tear that man down!  Despite America’s deeply religious underpinnings and history, there’s a desire to purge such memories and facts, define them as objectively depraved, and move on to progress and stuff like that.  The fact is, there’s more to the story, like there’s more to Wilder than her purported racism, but it’s part of the redefining of things that is all the rage.

There’s a striking resemblance between today’s defining of the “dark ages” of Protestant America and how “Enlightenment” thinkers and Protestants defined all things between the early Church and Greco-Roman culture as “dark.”   The very name “Enlightment” comes from this.  They bestowed upon themselves the name because they saw themselves as pretty smart and special, but they knew they had to build on something, so they reached back in history and claimed the Greco-Roman arts and culture as their heritage.  There was Plato and Socrates and other cool guys, then a “dark” period, which was them, and then a “light” period, which is us!  Vioala, en-light-enment.  Light, dark, light.  That darkness, or course, is the Catholic Church and her tyranny on thought and science and stuff like that.  Meanies. But, this gives you a fresh start and makes it so you don’t have to deal with your inherited baggage. You just say “these are bad guys who did bad things” as loudly and often as possible and praise yourself (and the other good-before-the-bad-people).

The Native American societies, in the new version of dark ages, are the near perfect image of humanity, then there’s some darkness, and now there’s us, the pure and illuminated ones that surely would not have been mean and stuff if we lived back then.  It was American Protestants that did all the bad things.   The life of the Native Americans was nearly Utopian, and we are like them.  They had herbal remedies and we have essential oils.  They took care of each other and we want universal health care. They lived on the land and we have Whole Foods.  See? They were great because they were like us.  That is… until the bad guys – the “dark age.”

The liberal America of today sees their own purity in thought and practice as impeccable – they don’t judge and aren’t mean and just want good stuff for everyone.  They are the Enlightened ones.  “We are diverse!  We have good education, fair trade coffee, and clean teeth.  Our relativism and reliance on science alone keeps us from being extremists, and we’re basically balanced and happy.  The only Americans that might have been better were, of course, Native Americans.”

We Catholics know there’s more to the story, because there’s more to ours than frequently presented. Many converts to Catholicism from secularism and Protestantism find their way into the Church by looking around the sort of historical iron curtain of “the Dark Ages.”  You see, if your core identity begins in either the Enlightenment or the Protestant Reformation, there’s a requirement that the Catholic Church be wrong and ugly in her very essence, a distortion of and danger to truth. To look beyond just that fact, to peek behind the curtain, or to acknowledge some nuance in history, is to flirt with danger.

Bl. John Henry Newman felt this, and part of his conversion was the famous line that to go deep into history is to cease to be Protestant, because, as he said, there is unavoidable fact of the Church’s presence and witness, and the Church’s witness and sanctity is impossible to ignore when you really look.  But that’s the point: defining and dismissing the Church keeps your identity strong, so it’s a requirement.  You have to keep up the disdain for the Church or your identity crumbles.  But, as Newman said, quoting a line from the Song of Songs (and also an antiphon in the Little Office of the Blessed Virgin Mary, which is where I think he latched on to it): “Who is she that appears like the dawn, fair as the moon, bright as the sun, terrible as an army set in array” (Songs 6:10).

As a Catholic, the sweeping characterizations of a millennia and a half into a definitively “dark” period is more than irritating, and much of it gets packaged up into bite size insults that even in themselves are misunderstandings or mis-characterizations – “crusades! Inquisition! Selling indulgences!” What the convert discovers is that you cannot arrive at the very place and possibility of Europe without the fact of the Catholic Church.  Progressivism sees all things new and modern as good and most or all things old, because they are old, as bad.  The caricatures of what came before allow the new club to exist unmolested because you blind yourself to and ignore the reality of what actually existed in all of its complications, subtlety, and fact.  And you dislodge yourself from it.  The fact is, there is no now without then, and there is an unavoidable debt that you owe your ancestors.  Enlightenment thinkers and the explosion of the physical sciences needed the philosophical realism of Catholic philosophy to flourish.  Books from ancient culture worth studying did not just appear, but were stored in monastery libraries.  The unity and order of the guilds helped rid Christendom of chattel slavery (until it got resurrected).

In full disclosure, I am consistently appalled as I learn about what happened to Native Americans. It is indisputable fact that the land we live on was and is raped for profit.  But I am not naive enough to think all before was perfect, that the Protestant Christianity of America was always and everywhere evil and dark, and we are now in a period of unquestionable light.  Native Americans had slaves, wars, and objectively evil practices too.  Colonialists were not all ravenous gold diggers.  There’s just more to the story than that, and the fact is the very existence of today’s liberal society requires and depends on the fact of what came before.  It cannot be undone.  You can say you’re an independent freedom fighter, but you’re still living off granddad’s reserves.

As Enlightenment thinkers failed to recognize that it was monasteries that had preserved learning and books through essentially secular turmoil after the fall of Rome, so too today’s liberal fails to see and acknowledge their own inheritance from the America they now live in.  You can’t live in a hip flat and drink imported coffee from Ikea mugs and claim some pure line from Native Americans.  What you have and who you are is an inheritance that must be accepted, and cannot be flatly and totally dismissed in a way that makes you able to take all the spoils of what came before but somehow be prelapsarian and untainted.  For those that have gone more radical in some sort of protesting, off-grid subsistence existence… maybe you have more to say.  For the weak and whiny – get off your high horse.

But, as a Catholic, I have bad news for you American Protestants that feel unfairly dismissed and denigrated.  When people’s concepts of themselves require that you be a bad guy, don’t go looking for sympathy – most won’t be interested in your apologetics. Oh, and by the way, a lot happened between the book of Acts and 2017.  I’d like to talk to you about it.