On Success and Salvation: What Does Our Work Say About Us? 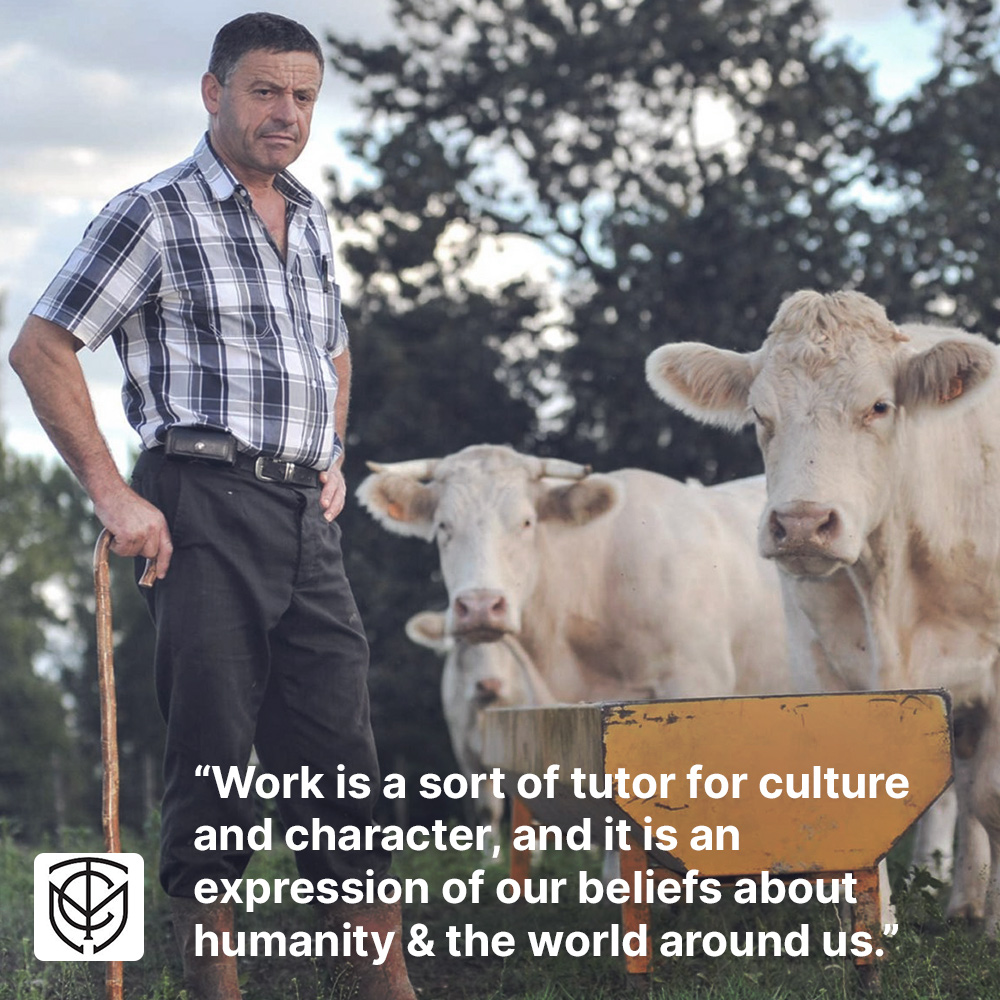 This is the opening editorial from the las issue of Sword&Spade magazine, and unmatched print publication for men and their households.

For years I’ve been hunting down the Foxfire books with a peculiar passion. The Foxfire publishing group started out as a magazine overseen by a flailing teacher in his effort to engage students fruitfully, then became a series of books. It was a period­ical about the students’ place, Southern Appalachia, which is why I’ve been so interested in the books (that’s where my farm is). The project also “worked” with the students. Even before gaining national attention and acclaim, the students discov­ered that their small community (Rabun County, Georgia) was a fascinating place of unrepeatable particularity in music, folklore, and general culture. The periodi­cal began in the ‘60’s, and we can see now that those students were able to preserve through its publication a unique and noble culture just in time — it wouldn’t be long before the modern way of life swept into Rabun and turned everyone into units of the “mass age,” as Marshall McLuhan called our media-saturated society. Surely we have lost similar gems the world over in the last generation or two, but we failed to preserve them with the same spirit as Fox­fire: heirs to a place recognizing the gift of their culture through genuine and reverent interest in its elders.

The famous title of the first chapter of the first book in the series — “This is the way I was raised up” — acts as a sort of thesis for the rest. It reveals a long history of tradition, generational connectivity, and a “way,” which is a beautiful substitute for the word “culture.” Instead of sociological abstractions, these stories and inter­views became detailed descriptions of hog-killing, log-cabin building, butter-making, and Gospel-singing (with a sidestory of the snake-handlers up yonder in the mountains). By and large when the old timers of Rabun were asked the question, “Who are you?” the answer came back, “Come see my work.”

Work is a sort of tutor for culture and character, and it is an expression of our beliefs about humanity and the world around us. What we make, how we make it, and why we make it — such things reveal a lot about a culture.

To be a creature with a body is to need work. Work is not the total sum of life, but it is a part of being made in the “image and likeness” of God, because creation itself is God’s work and our activity in creation is a continuation of the work begun by God on a natural and supernatural level. Work is the relationship of creature to creation. Literally, it is by work that we exist and express the fact of being here in this life, and the veil between natural and supernatural work is very thin. “My Father has never ceased working,” Jesus said, “and I too must be at work” (John 5:17). The activity of the natural man is working for the good of the body and the activity of the super­natural man is work for the good of the soul — the works of mercy and the “working out” of salvation, as St. Paul describes it. We exist as and by work. “For we are his workmanship, cre­ated in Christ Jesus in good works, which God hath prepared that we should walk in them” (Eph. 2:10, Douay).

Like marriage, work existed before the first sin, so it remains something necessary to being fully human. The only two commands in Genesis 1, in fact, are to have a family and get to work (“be fruitful and multiply” and “till and keep”). So, men, if it seems like your whole world is absorbed into bal­ancing work and family, welcome to being human. Work and family pretty much sums up our life here.

The balancing act of work brings up an unavoidable aspect of work for fathers, that solidifying duty of providing. This fact of providing can be a special point of conflict — within and around us.

Within us, our call to provide can induce confusion of identity. Our vocations inspire a deep need to give our family the best we can, yet that “best” is ambiguous and sometimes misleading. How much is enough? What’s too little? Are we spoiling or depriving our families? We often speak negatively about men who make their work (or making money) their whole identity, but if our vocation is fatherhood, and father­hood works to provide, there is a certain truth that we are our work. Obviously, disordered and undisciplined habits of work can make work-based identity a real problem, and since work is always disordered when it puts distance between family members, we must be wary of living in a world of “total work,” to borrow a phrase from Josef Pieper, where there is no life outside of productivity and profit. But, like all sin, the dis­orders around work and identity begin first in a natural and good thing created by God.

Within our marriages, providing for a family can cause us to have conflict in the home. Setting aside issues of overworking or being gone too much, even the nature of the work of a mother and father is different and, therefore, a potential place of disorder or division. Just after the fall Adam and Eve, husband and wife, were both told how sin would bring new challenges to the work of their respective vocations. There is a reason God addresses them separately, be­cause their work in relation to family is dif­ferent. Eve is told of the new difficulties she would have with giving life through birth (“with pangs”) and Adam was told of new difficulties when giving life by his work, which is meant for his family (“through toil [amidst] thorns and thistles”). These two new realities of sin are not given to “all hu­manity,” but distinctively to men and wom­en as fathers and mothers. I am knowingly brushing aside PC pleasantries in order to state the obvious to those with eyes open to reality: men carry the burden of providing for a family in a unique way (in relation to the “toil” of work) while women carry the burden of bodily and even mental health of children in a unique way (in relation to the “pang” of child-rearing). Toil and pang are the life of the home after the fall.

Just imagine a disagreement where the father comes home from working hard and his wife wants to talk about a health prob­lem she’s seeing in the baby. The husband feels like his need for decompressing from work is being overlooked (his toil is unap­preciated) and the wife feels like he doesn’t care about the health of the baby (can she have some comfort and help in her pangs?). For some strange reason, these valid concerns become an argument. Both are obviously worthy considerations, but after the fall those things we are naturally ordered towards become the places of disorder. Our distinc­tions become our divisions.

Within our own hearts and outward into our communi­ties the issue of providing is so intertwined with vocation it becomes tempting to measure our paternal worthiness (i.e. “manliness”) by available metrics — salary, net worth, sav­ings, home square-footage, etc. Measuring ourselves by those numbers then tempts us to weigh them against the numbers of others — enter our old friend Comparison, the midwife of Envy and Judgement. If a man makes more or less than anoth­er, is he more or less virtuous? Is he a harder worker? Lazy? Does society reward his work worthily and justly? Is he clever, salesy, lucky, or unlucky? This explains why it can be such a source of sinful pride or feelings of inadequacy. But, wheth­er we inwardly think ourselves better or worse than others, comparison of worth-by-worldly-achievement is obviously opposed to God’s vision for and of us. It gives rise to pre­sumptions, resentments, judgements, and so on. The work of Cain the tiller of soil and Abel the tender of livestock was very different, and their difference provided an opportunity for comparison, which Cain did (Abel had his eyes on God, not Cain’s offering). That didn’t end well. Variety is the stuff of life, beautifully so, but the enemy can turn variety into division.

Our work has become predominantly about funding a lifestyle that projects success, because success, however de­fined, is one of the cardinal virtues of modernity, along with independence, choice, and mobility — “virtues” foreign to the culture of Rabun, Georgia in the time of Foxfire. Why else but for the sake of success signaling would so many overextend their credit on symbols of status like new cars? We are literally willing to help banks be profitable through usury so that we can appear to have more money than we do. To the question, “Who are you?” we seemingly respond, “Look at what I have.”

Work is like water: necessary to life, yes, but able to drown us as well. Yes, many of us love what we do (sometimes too much), but it seems many more feel stuck in the thistles without the delight of the garden. With some subtle differences work can be the liberation of a joyful craftsman at his trade or the enslaved tool in a Soviet Gulag.

Clearly, we need better, practical, and more articulations of a philosophy of work — how to think about it as Catholics and fathers. Within the Church there is abun­dant wisdom in this regard, yet the divide of experience between clergy and laymen, along with a lack of serious engagement with the nature of work in post-modernity, has made clear thinking and acting a diffi­cult task. I hope this issue, with its excerpts and tangible stories, helps to bring some clarity, or at least worthy considerations. This in itself is hard work, and the editors and contributors of this issue are happy to put their hand to that plow. The simplest thing we can do, and I hope this issue does this, is to orient or reorient all of the activity of our life toward the work of man heading to God. “Work at all your tasks with a will, reminding yourselves that you are doing it for the Lord, not for men” (Col. 3:23, Knox).