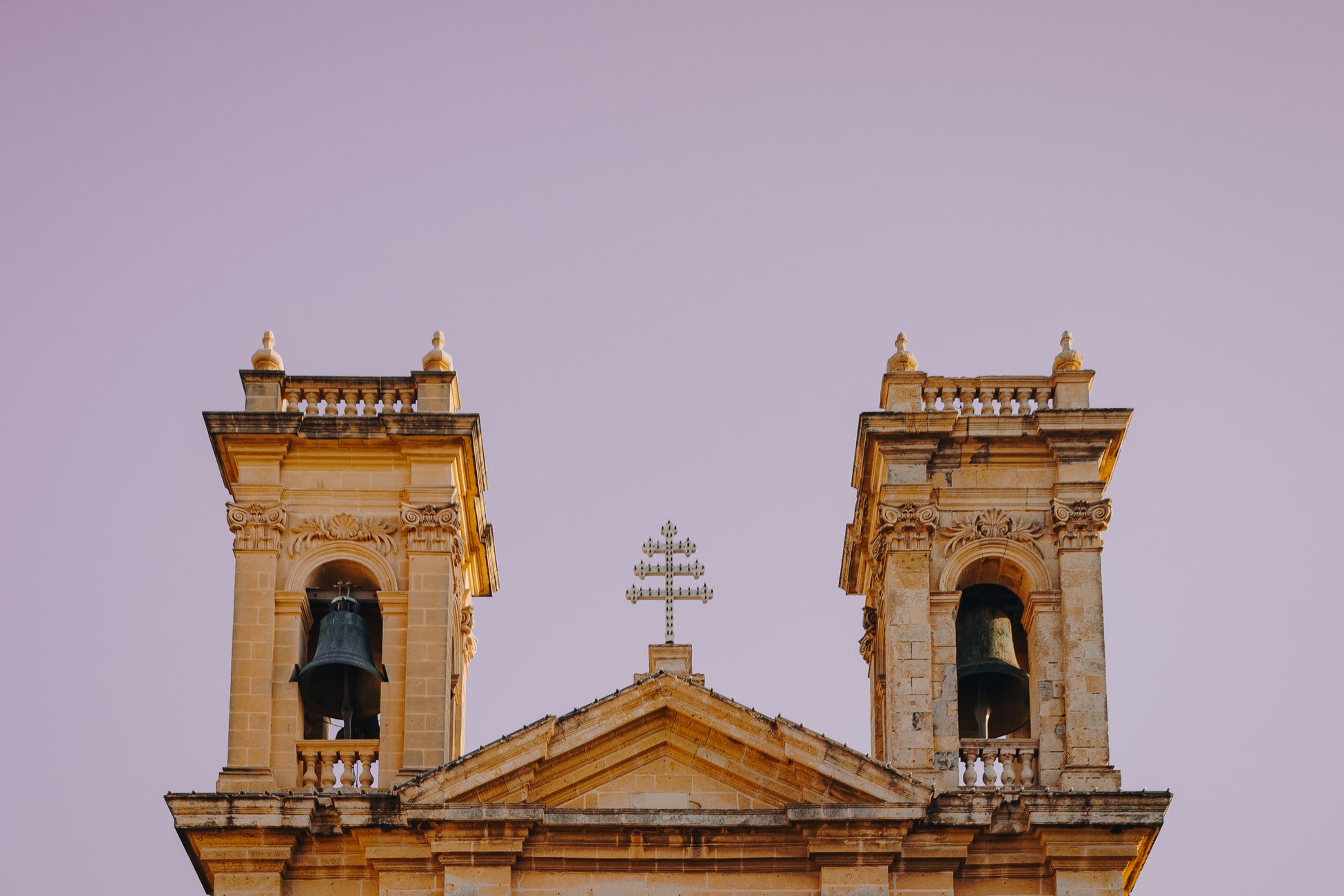 As I write this in my home-office, I am 76-years old and have lived in much larger Iowa towns since leaving Lawler, Iowa (population 500) as a 19-year-old: Mason City, Cedar Falls, Fort Dodge, and now Johnston—a suburb of the state capital, Des Moines.

One summer day about 12 years ago, working for the Principal Financial Group, I was enjoying lunch on their patio in Des Moines. It is the tallest and most recognizable building in the state. Across the street, on the north side, is a church which rings its chimes on the half-hour. Although I had heard the sound many times before, that day my mind raced back to boyhood days in my beloved northeast Iowa hometown, to a special bell at Mt. Carmel Catholic Church that meant so much to me.

Every noon-hour a special thing happened with that bell. There were 9 rings from the small bell and 12 rings from the bigger bell to remind us to bow our heads for the ‘Angelus.’ The following is taken from Wikipedia to explain the ritual:

The Angelus (Latin for Angel) is a Christian devotion in memory of the Incarnation. The name Angelus is derived from the opening words: Angelus Domini nuntiavit Mariæ and is practiced by reciting as versicle and response three Biblical verses describing the mystery; alternating with the salutation “Hail Mary!” The devotion was traditionally recited in Roman Catholic churches, convents, and monasteries three times daily: 6:00 am, noon, and 6:00 pm (many churches still follow the devotion, and some practice it at home). The devotion is also used by some Anglican and Lutheran churches. The Angelus is usually accompanied by the ringing of the Angelus bell, which is to spread good-will to everyone on Earth. The angel referred to in the prayer is the Angel Gabriel, a messenger of God who revealed to Mary that she would conceive a child to be born the Son of Christ. (Luke 1:26-27).

In the 1950’s Lawler was 95% Catholic. However, I am certain that our Protestant brethren also took comfort in the public display of prayer (not to mention that it signaled the time for my buddies and me to head home from The Park for lunch).

Of course, it rang on Sundays prior to each Mass and, more importantly, gave notice when one of our parishioners had passed away. There was one toll for each year of the newly-deceased’s life. Because the community was close-knit, it rarely surprised us who had just died. If you counted the rings and knew that if Hazel or Henry or Fred had been quite ill, and their approximate age, you could guess about which Lawler citizen had just gone home to meet their Maker. We always made a sign-of-the-cross and said a silent prayer for the family.

It reminded us that this is a journey here on earth. We are visitors, simply passing through. When I think of that Mt. Carmel Catholic Church bell announcing a death, it brings to mind the famous John Donne poem, “Ask not for whom the bell tolls. It tolls for thee.”

Yes, the church bell across the street from 801 Grand in Des Moines is impressive and has a nice sound. But it doesn’t hold a candle to the one that I heard growing up in Lawler.

That said, it’s time for me to make a public confession. And tell you, to quote the late radio icon Paul Harvey, “The Rest of the Story.”

I would like to be able to blame my buddy, George Timlin, who had a knack for getting me into trouble. A year older than me, he always had creative ideas on endeavors that were great fun, but all too often led to a bad ending.

Truth be told, however, this one was on me.

The custodian of Mt. Carmel Catholic Church in 1955 was Billy Cutsforth. George and I liked Billy because he would allow us to ring the church bells at noon. To be accurate—there was only one bell with two ropes. One was responsible for tripping a mechanism to hit a smaller ringer against the bell and the other to emit a louder sound with a bigger ringer. Of course, we had not the vaguest idea how any of that worked, assuming that there were two bells in the tower.

The small bell had a skinnier rope and was to be pulled at noon 9 times for the aforementioned ‘Angelus,’ immediately followed by the big bell 12 times. That rope that was sturdy enough to lift an 11-year-old up in the air a few feet. Great fun! We were announcing to the citizenry that lunch time had arrived.

On this particular day it was my turn to pull the small rope. As 12-year-old George waited his turn for the big one, I began to wonder what would happen if we pulled them both at the same time, but said nothing to him.

My buddy began tugging on his rope when I began to say aloud, “I wonder what would happen if…?”

But for some reason which I still don’t understand 65 years later, I chose not to finish my sentence aloud.

Instead, in the middle of George’s sixth ring, I simultaneously pulled on the skinny rope again.

I looked at George.

George looked at me.

We both looked to make sure that Billy Cutsforth was not around and proceeded to do the most logical thing we could think of: run for home as fast as our little legs could take us!

I’m not sure what George did when he got to his house, but I hid under my bed and prayed for a miracle.

Because it’s been six and one-half decades years since the unfortunate incident, I can’t recall the sordid details of crime and punishment. I mostly remember that the church bells in Lawler, Iowa did not ring for at least two weeks. My nick-name for the rest of the summer was “Dinger.” And we were never asked to perform that coveted chore again.

I also realize now that if I had not pulled that rope when I did, I would have missed out on a wonderful tale to share with my grandsons, Ben and Luke.