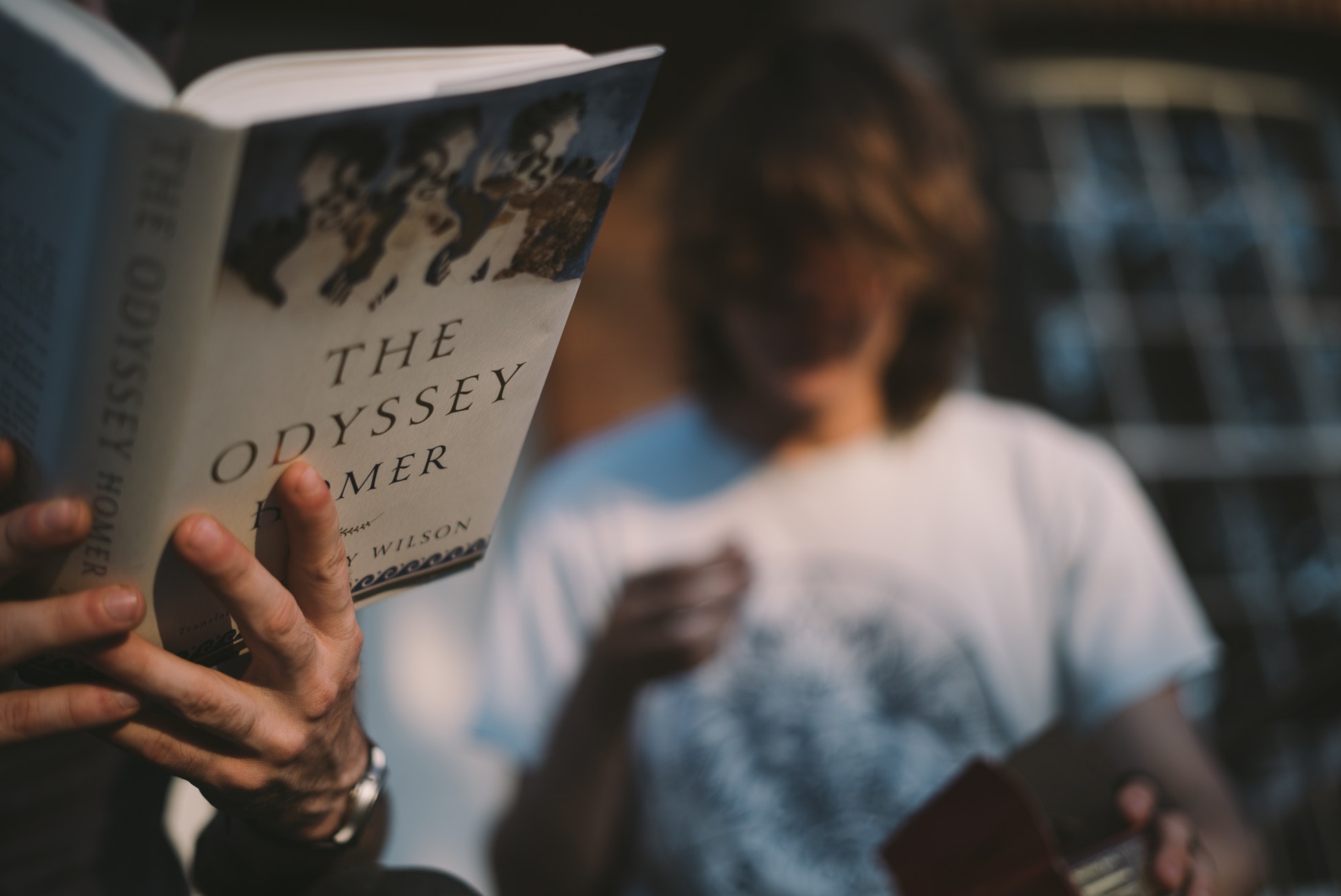 The following was featured in Sword & Spade, a magazine for men edited by Jason Craig.

The Odyssey by Homer is one of those towering works that has been read and taught by scholars for so long that it might seem best left to them, not to be enjoyed by the common man. I propose that every Catholic man, as an inheritor of the great Western Tradition, should take up the Odyssey boldly and confidently, because can most clearly understand and experience its truth.  This is a treasure passed on by your fathers and it belongs to you – don’t miss out on its wisdom.

This epic is especially pertinent if you’re a man because, while there are powerful expressions of the feminine in the Odyssey, its overarching narrative is a boy and a man trying to reunite and bring order where chaos is raging due to the absence of the father and the immaturity of the son. It speaks on a primal plane, expressing the aches and battles of the heart.  I’ll provide just a brief introduction.

The story begins by portraying fatherlessness through Telemachus, the son of Odysseus, living at home with his mother Penelope in a large estate that was once ruled and brought to prominence by his mighty father, now presumed dead.  This is ten years after the Trojan Wars (the subject of the other great epic, The Iliad), and Odysseus, unlike many other warring men, has not returned home. The paternal absence clearly hurts, but worse are the “suitors” tryin to woe the beautiful Penelope. They are a group of loafers, squatters, and conmen, making merry and squandering all that would be Telemachus’ inheritance. They are indifferent to Telemachus at best and total bullies at worst. Not only is the great war hero gone, but because his boy is nothing but an uninitiated coward, his estate is free game.

After we are introduced to the problems back home, Homer shows us Odysseus, who is lost at sea, trying to return from war while running into snare after snare. Today’s fathers will relate. Not only does the war hero have to face down monsters and the loss of brothers, but he endures things like goddesses trying to ensnare him, reminding him of how they are perfect, immortal, and at his service, and how his wife is none of these things – one should be reminded of the allure of porn. Of this and other threats to his determined effort to return home he must fight constantly.

To help things along, a goddess friend of Odysseus appears to Telemachus as Mentor, a family friend. (She of course knows better than to appear as a female, even if a goddess, because in bullied and sullen adolescence Telemachus needs a mentor, not another mother. And, yes, this is where the word mentor comes from.) With her help, Telemachus goes on his own adventure to learn the story of his father’s might and legend. The two finally unite back home in defending their household (where else?). Excuse the spoiler, but my favorite part is when father and son lock the suitors inside the house, and Odysseus throws a spear through the throat of one. Anyone reminded of Kenny Rogers’ song “The Coward of the County”? (Look it up, because it can help when reading the Odyssey too.)

Read the Odyssey. But don’t read it as a wannabe scholar, or as though you’re in high school English again. Read it as a man who has heart and battles and strengths and weaknesses. Read it with a friend or a son or both. Just don’t leave it to the expert alone, because there are treasures in it that can only be mined by someone like you.

There are many versions available. I encourage you to try the unabridged original epic story: The Odyssey by Homer. Padraic Colum’s The Children’s Homer is an excellent retelling that can be read with the whole family. My challenge to you: read it like a man, as a man.

What My DAD Taught Me About Strength

How Mary Can Form You to Be a Man…