Lessons from Monks for Men 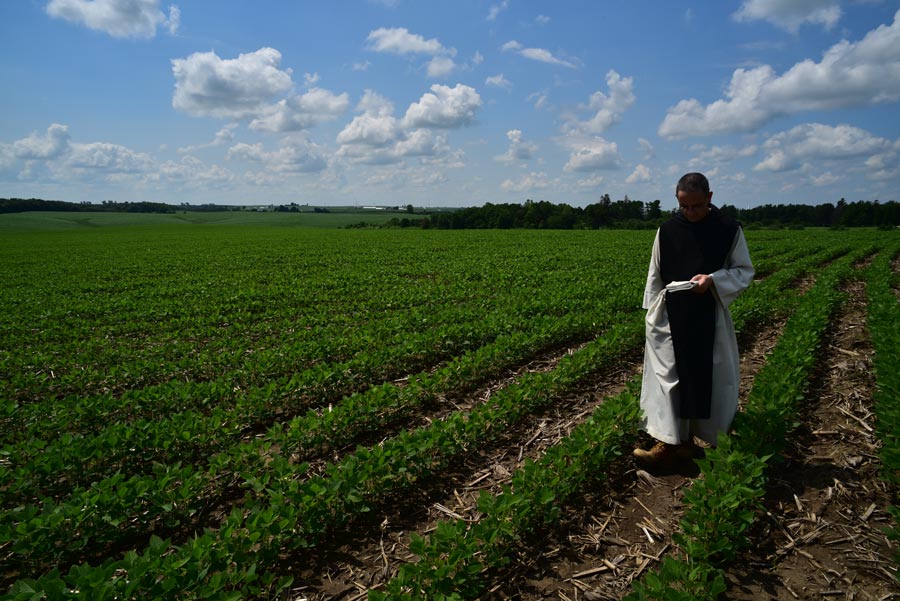 Recently, I experienced the joy of joining eleven other young men from around the country for the Monastic Wisdom Seminar at New Melleray Abbey, a Trappist monastery in northeast Iowa.

I got an impression on the first night that the week would be unlike any other when one particularly humble and wise monk said, “My life is a doxology.” Then, he simply chanted the Glory Be, bowing from his hips for the praise of the Trinity. “That’s it. That’s my vocation. My work is done.” He said it as a worker would describe his daily job: simply and without pretense.

To our modern ears, the notion of one living his life solely for the praise of God does not satisfy our utilitarian urge to produce. I admit that I was skeptical, originally thinking, ‘what about the caskets you make or the food you grow?’ This work, it later became clear, is all a part of the doxology. As I saw monks in denim shirts and cargo work pants assemble caskets and pull weeds from their lush field, I was reminded of the conference in which a monk identified the “monk” as an archetype. “To discern a monastic vocation,” he said, “is to be in Christ and then ask Him what He would have me do.” Is there much distinction in this vocation from that of the universal Christian vocation which St. Paul outlines: “I have been crucified with Christ; yet I live, no longer I, but Christ lives in me” (Gal 2:20)?

The monastic life, because of the defining solitude and silence, is the hyperattentive response to the exhortation of St. Paul. Through his autobiographical description, Paul defines the Christian life as that of suffering and ultimate identification with Christ. This subject introduces what I found to be the most beautiful and eye-opening moment of the retreat. That same monk who identified his life as a doxology described the “eschatological urgency” with which Christians must act. “Brothers, this is the bridal chamber. The Bridegroom is here. He is inviting you to an intimacy undreamed of in the old covenant.” The monk encouraged us to act with the fidelity, certitude and urgency of the Apostles and early Christians after hearing the Anointed One proclaim to the Galileans, “the time is fulfilled, and the kingdom of God is at hand; repent and believe in the gospel” (Mark 1:15). Because we “know neither the day nor the hour” (Matt 25:13), there is no time to waste in being the sons of God “who are led by the Spirit of God” (Romans 8:14).

This identity with Christ, of course, cannot be done by man alone. One of the innumerable graces Our Lord gave to us by means of His Paschal Mystery is the ability to sanctify, through the grace of God, every encounter, sacrifice and moment of our earthly lives. In our world of incessant dialogue, there lies little time for being. There is even less time, as Pope Francis noted in Ave Maria: The Mystery of a Most Beloved Prayer, for the children of God to wonder at His creation: “We need to rediscover amazement in the life of the Church. We need to marvel.”

There was more than enough to marvel at the life of the monks of New Melleray Abbey during our six-day visit. Twelve unprepared men were forced to face themselves in the mirror for six days in solitude and silence. Through the psalms, we were reminded of our constant reliance on God; through the silence, our mortality; through the minimalist architecture, our tendency to excess; through reading, our ignorance; through the monks, our pride. May the monks of New Melleray and all men and women who responded to their monastic call with the fiat of Our Lady continue to pray and work for the other lung of His Church and the world which needs them so desperately.

livingMonasteryVocation
07 16 2019
Back to all articles