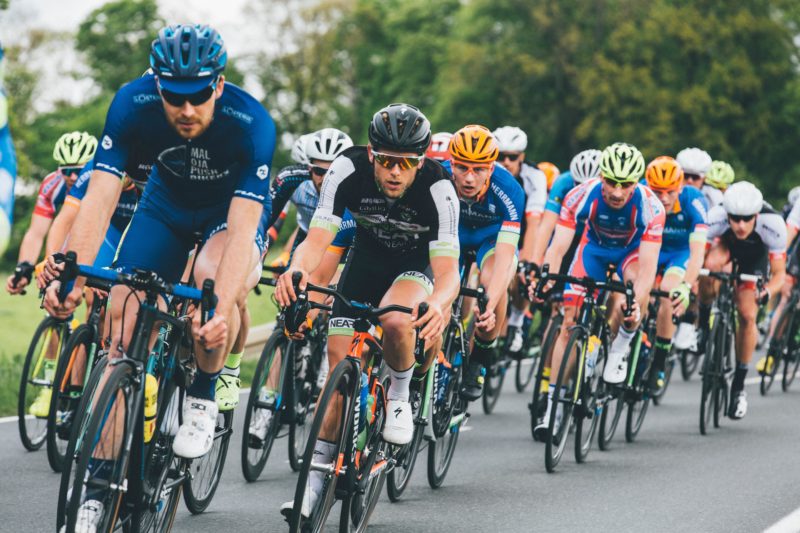 These infamous words of Indiana Jones in Raiders of the Lost Ark epitomize how a pilgrimage is truly a microcosmic slice of life’s spiritual journey, a distilled process of the joys and sufferings in the everyday encounters with fellow travelers through the stories portrayed in the flashback scenes of the movie of our lives, symbolizing how each of us ultimately strives toward the shared objective of making it home. And it can be done on a bicycle.

My wife Mary and I celebrated our 10th wedding anniversary Thursday, July 19th by attending the 5:30 p.m. Mass at St. Malachy’s in Madrid where we exchanged Claddagh rings and renewed our vows. Three days later we loaded up our bicycles and began our own little pilgrimage on RAGBRAI, the 7 day-long Register’s Annual Great Bike Ride Across Iowa. Starting with the time-honored dipping of the rear wheel in the Missouri River in Onawa, the goal is to ride between 60-70 miles each day and dip the front wheel in the Mississippi River in Davenport. One of my frequent aspirations is, “Thank you, Lord, for the gift of baptism and the gift of water.” Much like life’s beginnings rooted in baptism, this year’s ride took on significant meaning for me regarding the importance of the inextricable relationship of God’s blessings of water and life from beginning to end, always drinking water to stay hydrated, the refreshing summer rains in Jefferson, the timely search for a cleansing shower at each day’s end, and reaching the final stop on the route where I was baptized in 1961 in Davenport.

This was the 46th annual ride, my wife’s third, and my first. The route changes every year. In its history, the 46th version was the 4th shortest (425.1 miles) and the 7th flattest (about 12,500 feet of hill climb). Temperatures in Iowa at this time of year are typically in the 90’s, but the nights were in the 50’s and 60’s and the hottest days were in the mid-80’s for absolutely ideal conditions. We trained pretty well beforehand, but still had to scale many long, steep hills. I purposefully kept a rosary wrapped around my handlebars for daily use, and meditating on Christ’s Way of the Cross helped me up each and every hill. I gave it away outside of Manning on a chance encounter with a retired Army Colonel who asked me if I had an extra rosary for her. Luckily, I brought not only spare tubes for several flat tires, but packed a spare rosary just in case something like this happened.

The joy and generosity of those we met on the way was tangibly evident. My fellow Knights of Columbus brothers opened their homes to us for overnight accommodations. Friends in Coralville welcoming us and catering to our every need as if we were royalty on the sixth day when the road-weariness really began to settle in. A colleague in Ogden who wanted to replace my defective left pedal at no charge and discount the price on a new rear wheel as a favor. After my 5th flat tire, down to my last spare inner tube in a rural ocean of corn and soybeans, a man pulled up alongside and asked me if I needed one. “Here’s two,” he said. “I brought plenty extra.” Arriving at the next town and buying three or four more inner tubes, I must have asked two dozen of my traveling companions afflicted with flat tires along the rest of the way if they needed one, but they either had them, someone else beat me to it, or the U.S. Air Force “Angels” Cycling Team, who were ubiquitously present throughout the ride, were helping everyone and anyone experiencing problems. It was a united community of about 25,000 Good Samaritans on wheels looking out for one another. Total strangers? Not in the least. They were Christ Jesus making Himself present to everyone they met.

Hospitality is a gospel imperative, and we experienced it in abundance all along the way, and especially in the Catholic Churches we visited for Masses and daily prayer. I’ve never met a more joyful and enthusiastic priest than the one who celebrated Mass in Willey on Saturday afternoon before the opening of the ride the next morning. Pat and Ginny gave us a warm welcome at Sacred a Heart in Templeton, insisting we take a rosary ring with us. Church doors in Keota, Wilton and Hills were all unlocked, wide open for morning and evening prayer, staffed by parishioners offering us water, rest, shade, peace and quiet to spend some time with Christ in the tabernacle before mounting up and riding on.

Amid the vast crowd of vendors selling their wares for various prices (most decent, some gouging), in Denison and Muscatine local residents invited us into their front yards and roadside tents for simple fellowship, “sitting a spell” on a folding lawn chair beneath gigantic oak trees and opening their coolers full of free beer on ice. Oh, my goodness. Free, cold, icy beer after pounding out fifty miles on county roads with twenty more to go. Nowhere have the lines from the epic film Field of Dreams ever struck me as more palpably present and truthful than at that moment: “Is this heaven?” “No. It’s Iowa.”

At the tender age of 57, I can tell you the trip would have been impossible without ibuprofen and acitaminophen. The fact that my wife is a nurse anesthetist also helped greatly. It’s not the cycling that gets you, but the preclusion of your daily comfort zone; the dicey search for coffee in the morning, camping out in unfamiliar places, long waits in lines for the “kybos” (portable toilets) and constantly being on the move. Despite over the counter medications and traveling with one’s own personal nurse, there are the inevitable aches and pains and bumps and bruises. It takes 7-8 hours of cycling each day to get from one overnight town to the next. The strain on the backside, the neck and the shoulders is constant. Mary “piled” her bicycle somewhere in eastern Carroll County after her front wheel accidentally collided with my rear wheel and she went down hard at about 12 m.p.h. A couple State Troopers assisted me with helping her back to her feet. Nothing was broken, but she could not escape some minor “road rash” scrapes on her shoulder and leg. Pilgrimages are not supposed to be comfortable, but arduous and challenging. Just like life. Just like the spiritual journey all of us share. Plenty of opportunities to “offer it up” as the B.V.M. Sisters of my youth repeatedly advised me.

Yet all of it was more than worthwhile. Breathtaking sights of the vast drumlins amid the hills and valleys of Monona County where you see real, green, living Grant Wood paintings for miles and miles. If Ireland is famous for its 40 shares of green, the great Hawkeye State must have twice that number in the hundreds of thousands of acres of corn and soybeans slipping by the cyclist on either side of the “rollers” (rolling hills) or “climbers,” “killers, or  “hillers” (steeper inclines) that break up the merciful “flats” along the way. There is one convincing fact about Iowa. God is an artist.

On the third day, the route came right by our home. Gone now for about four days, we had about 50 eggs to gather, and, reminiscent of Cool Hand Luke, I could eat all of them. Oh, the respite and comfort of sleeping in your own bed is harshly juxtaposed with the reality of rising with the cockcrow of your own rooster (“Brucester”) before sunrise the next morning, knowing you must abandon all that comfort and familiarity to push on for four more days of grueling pedaling. And the temptation of simply staying home and “calling it good” had to be battled with King Henry V’s “Once more into the breach, dear friends, once more!” mentality as you see home and hearth dwindle in the rear view mirror.

And the humor made it a joy. Various teams (Team Bad Music, Team Jackhammer, Team On Tap) with their crazy costumes, songs and practices were always enjoyable. One particular team would stop and dress up the dead raccoons, possums and kitty cats on the pavement with beads, little hats, sunglasses and colorful bows and feathery boas to the giggles and, perhaps shock, of the riders. Aptly, that was the strange, albeit entertaining mission of Team Road Kill.

To commemorate ten years of marriage, most couples go out for a nice dinner and maybe a movie. My wife and I set aside a week and continued to work on the story line of the movie of our married life by bicycling together from border to border across the State of Iowa. It was not an easy task. But, like marriage, only love can make it easy. And perfect love can make it a joy.

And on the seventh day, after finishing as we started by celebrating a Mass of thanksgiving and praise at St. John’s Catholic Church in Delhi where we were married ten years before, we rested.

It’s not the end, honey. Only the beginning.

challengedifficultjourneylovemarriagePilgrimageRAGBRAI
08 06 2018
Back to all articles

Today is the Day to Run to The Cross