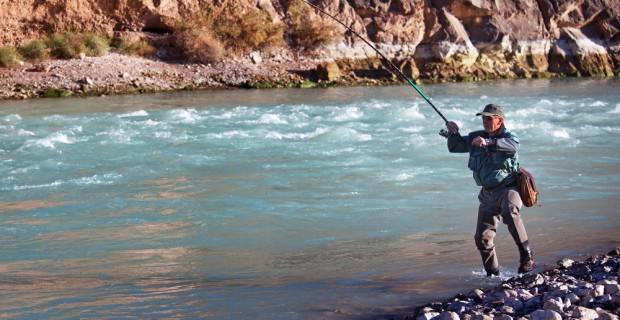 In the early hours of the first day of August, ten sleep-deprived and mildly dehydrated priests left the Crazy Rainbow Lodge outside of Casper, Wyoming and climbed into pickup trucks. Today was ordained by providence to fish the North Platte River under the direction of one of the best outfits in the country. But even these guides were not prepared for us.

I found myself sitting shotgun to a guide named Jameson, arguably the most intimidating man I have ever met. When you encounter men of this stature, you have two options – go silent and play it cool, or talk shop and play it cool. I chose the former and while the priest in the backseat chose the latter. He began talking (in a Missouri accent which he did not have) about the bass his granddad use to catch and obscure details of fishing lore to demonstrate a knowledge superior to the silent guy in shotgun. Within an hour, our boats were drifting on the shore, our rods were prepared and Jameson was thoroughly unimpressed by the façade of our fishing expertise.

Conversation in the boat flowed like the river. It was with grace and patience that Jameson explained to us the art of fly-fishing, and gradually we eased into the deeper things of life. Yet despite our priestly presence, the conversation touched on religion about as long as a dry fly touches the water. And it was meant to be. For on that day, God ordained that priests would learn from a fly guide how they were meant to live their lives.

Amidst the cultural upheaval of the last fifty years, Pope Paul VI sought to reorient the Church around a concept central to her life, known as evangelization. He told us that the Church exists to evangelize, that it is a task that constitutes the essential mission of the Church.[1] The work of evangelization (from the Greek word εὐαγγελίζω, to “proclaim good news”) is not merely an activity, but the fundamental task of every Christian, in every state of life, at every time in history. The Church exists to proclaim that Jesus Christ, the presence of God with us, is the good news of man.

But there is a problem. The modern world has heard this proclamation of good news, and rejected it as either not good, or no news at all. The practical atheism of our secularized-postmodern world has a unique quality; it defines itself as not Christian. The theologian Von Balthasar notes that atheism (as we understand it) did not exist before Christ; its existence is tied directly to Christian revelation. In an age where God has been proclaimed dead and the Christian faith found wanting, we experience this fundamental mission to be far more arduous than anticipated.

So we return to a calmly drifting boat on the North Platte River, to the words of Jameson, the fly guide, to learn anew how to evangelize.

I. “No one can teach himself to fly fish; it has to be handed on to you.”

At the heart of fly-fishing is traditio – tradition – the handing-on of an art. Anyone can go throw a lure from a spinning reel and catch fish; but to fly fish demands patient instruction and discipline. As Norman MacLean wrote in A River Runs Through It: “My father was very sure about certain matters pertaining to the universe. To him all good things – trout as well as eternal salvation – come by grace and grace comes by art and art does not come easy.” Evangelization likewise must be handed on as an art; it is part of the traditio of the Church, of which we must first receive. Thus the first work of evangelization is not evangelization; it is about the relationship of Christian discipleship. We need to find a guide and get in his boat.

II. “You won’t catch fish if you are trying to catch fish.”

As I heard rejoicing from another boat, I thought to myself the typical male response: “There is no possible way that guy is going to out fish me.” This instinct only makes things worst because it seems to me that the more you try to catch fish, the more it doesn’t happen. The best fisherman I’ve seen cultivate an indifference around the catching up fish that affords them the confidence of making the catch. Pressurizing one’s existence for any task does not lead to heightened efficiency. An Evangelical Protestant once asked me how many souls I had saved, to which I responded, “Give me a minute to add them up …. oh wait …. zero.” They found my answer as pathetic as I found their question disturbing. Evangelical Christianity of the last few decades has created a new allergy to the gospel in our already secular, post-Christian culture, and has made our work more difficult. Any presentation of the faith that is professional, over-spiritualized and polished, that carries even the remote semblance of “as Christians have it all together and can fix your life” will never be effective. It is an approach wrought with arrogance and lacking the authentic humanity requisite of evangelization. As Paul VI said the first means of evangelization is the witness of an authentically Christian life, given over to God in communion.”[2]Because people are not projects, evangelization cannot be evaluated by goal setting and results based planning. The key to true witness is the humble acceptance that we are incapable of achieving what we are attempting.

III. “You can’t catch fish if the fly is not in the water.”

Every since I first fished with my Uncle Duane, I have lavish dreams of massive casts spanning hundreds of feet in the air and landing perfectly in the mouth of fish. In reality a fly cast is far simpler; especially the nymph cast we employed on the Platte. Making a more complex cast is pure vanity and gave me nothing more than the headache of untangling lines. Just as fishing can’t happen without water, evangelization can’t happen without relationships. We expect that we can walk into someone’s life, cast the perfect presentation of the gospel and draw them into the faith. The life of evangelization has to be immersed in a life of relationship. Whether in work, in the neighborhood or in the family, the best evangelical artists are those who know how to relate well in friendship. The greatest obstacle to evangelization is our human weakness, not their lack of faith; it is the tangles in our line instead of lack of bites on the fly. An authentic Christian knows instinctively how to enter into relationship without conditions, expectations or intentions – they live with the simple desire to be with.

IV. “Setting the hook is a slight lift, not a hard jerk.”

This lesson is remarkable. At the precise moment of the bite, there is usually less than a second to make a slight lift of the hand, which sets the hook firmly into the mouth of the fish. The art of fly-fishing demands the strangest blend of calm relaxation and attentive vigilance. Too much laxity and you miss the bite; too much intensity and you think everything is a bite. Somehow this same calm vigilance is demanded in the work of evangelization.   Living in the constancy of relationship requires an attentive presence, a focused discernment and a deep trust that only the slightest effort on my part is required to set the hook.

V. “Sometimes you have to let the fish run.”

Imagine you just took a bite from what you thought was a gigantic jelly donut and then realized that you received a new jaw piercing from a hook the size of a tire iron. From this perspective, it’s understandable why fish go ballistic the moment the hook is set. And this becomes the great challenge to landing the fish in the boat; sometimes you have to let them run. To bring up the tip and let go of the line gives one the counter intuitive feeling that everything I just accomplished has been lost. In my experience of spiritual fatherhood, there is nothing more painful than watching someone hooked by Christ run as far and as fast as possible in the opposite direction. It evokes in us the desire to grasp for control and to resolve the experience of powerlessness. It is a moment of profound yet difficult configuration to the cross of Christ; to undergo the reshaping of the heart into cruciformity. It is the moment when God calls forth the last remaining fragments of pride, entitlement and accomplishment, that true humble poverty may come to perfection.

Jameson taught us a great deal that day on the river, but there are certain things only God can teach. In evangelization, we really are not fishing; we are being fished. In other words, we are merely fly rods – the instrument of the fisher of men. No matter how much we fail and how far the fish runs, the master fisherman is at work, with the eloquence of providence and patient love, as he reconciles all things the boat of the Trinitarian life. For at the heart of evangelization is the trust that every soul, in some hidden way, God has caught with an unseen hook and an invisible line which is long enough to let him wander to the ends of the world and still to bring him back with a twitch upon the thread.[3]

Johnny, June and the Boy Who Knew