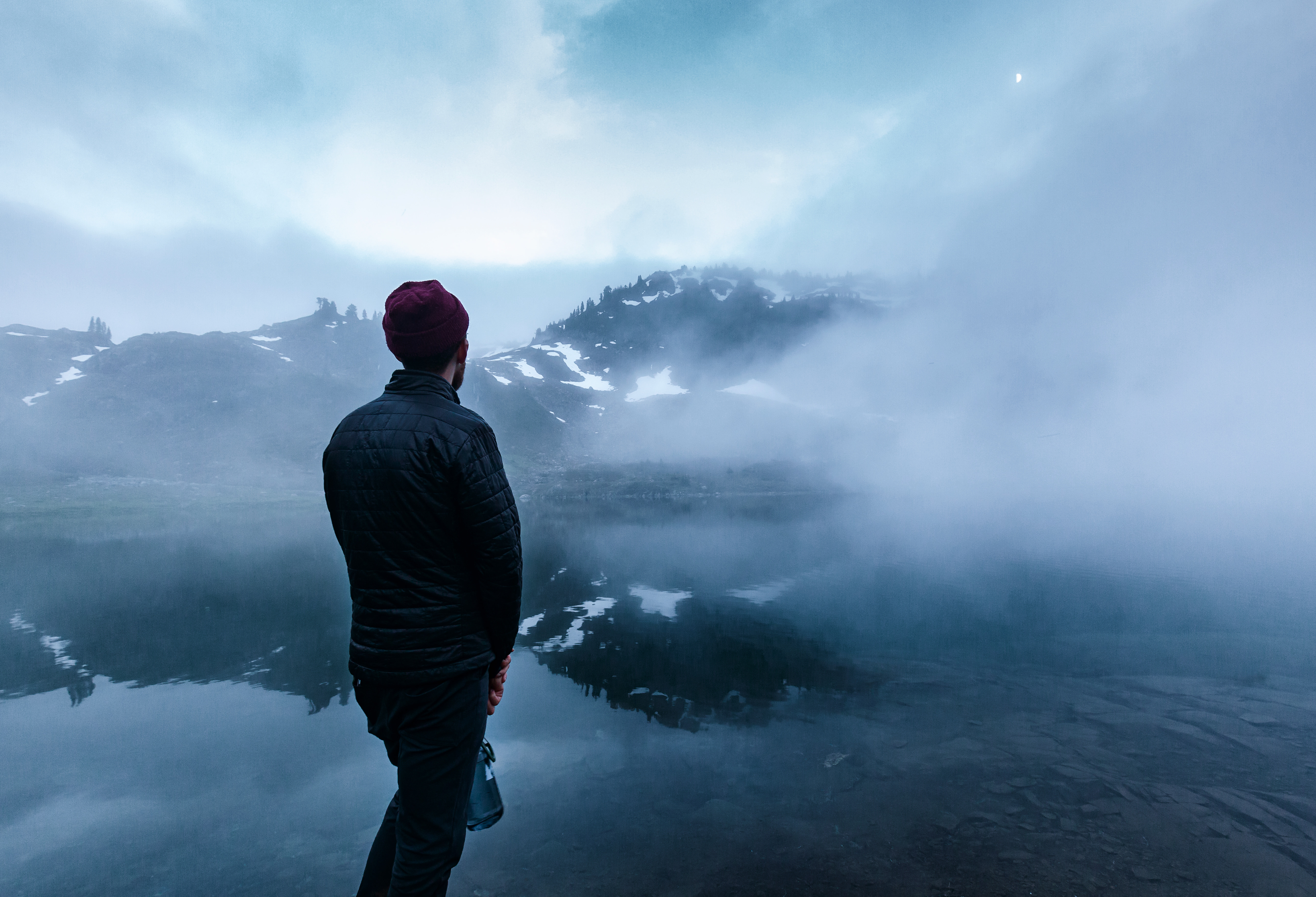 In the late spring of 1924, George Mallory ascended the North Face of Mount Everest, attempting to be the first man to stand at the top of the world.  Whether he reached the summit is not known, because he never returned to tell us.

Before departing on the expedition, a reporter asked Mallory a rather elementary question:  “Why do you want to climb Mount Everest?”  His answer has, for the last century, been known as the most famous three words in mountaineering.  Because it’s there.

Mountaineering concerns questions of being and action.  Questions of being are metaphysical:  Why do mountains exist?  In their grandeur and majesty, they act upon us and even “call out to us” as John Muir wrote.  Following the metaphysical comes the questions of action, which concern morality:  Why do I desire to climb them?  Ought I to climb them?  Why this innate desire to act upon them, to be with them?  And in the darker corners of the heart, the conquer them?  In this encounter, the metaphysical and the moral coalesce as when a storm wraps around a peak’s high summit.

Because it’s there.  Simultaneously the best and worst answer I have ever heard.  Considered morally, Mallory’s answer is entirely inadequate.  How could one justify risking everything in order to stand in a high place?  Those who loved Mallory certainly demanded more.  But then there is the other question – the metaphysical.  Considering from this perspective, his answer is absolutely brilliant.  Because it’s there.

I have spent the summer in the heart of secular Europe.  Nietzsche’s proclamation of the death of God is all too evident in the European mind.  The faith has become such an archaic impossibility, that the thought of a life committing to it is truly unthinkable.  But this trend concerns more than just Europe: America is seeing through the hollow, intellectual vacuous Protestant Evangelicalism, and is moving towards the dark secularism of its elder European brethren.  Beneath the thin smiles and contrived gaiety lies a deep-seated despair, few of which have the interior grammar to comprehend it.  It is a felt darkness, a world without God and towards this America is trending.

Better put: because He’s there.  The question of faith, which moves beyond the question of created being, is a personal one: At the center of all reality, do I find a person?  What if I did?  What if faith didn’t give me better psychological health, greater eschatological security, and the building blocks for creating a better world?  In other words, what if I gained nothing from it: Would it still be worth it?

I’m worn out with fighting angry feminists and godless humanists.  I’m too impatient to forebear and too prideful to lose.  I truly believe that the Christian God is the only solution to the question of my life and those of the world at large.  I believe it contributes more to the restoration of the natural and supernatural order than all else, but does so in a profoundly mysterious way.  But when I say this, it is hastily rejected.

So I’ve come to my latest apologetic, a new way of defending the faith.  It’s not a proof for the existence of God; it’s not even really an apologetic.  It certainly won’t convince anyone.  But it’s honest, and maybe, just maybe, even more perfect.  Why do I believe?  Because it’s there.  The self-disclosure of the Trinity in history – the full presence of the person of Jesus Christ in the Holy Catholic Church.  It’s there and it has nothing to do with me.

Prove to me God exists.  I hear this question daily.  And my usual response:  Prove to me God doesn’t exist.  It can’t be done.  There are certain foundational questions that reach an impasse – they simply cannot be resolved by rational inquiry.  As Josef Pieper often writes, belief is a part of the intellect.  Belief is the demand of any truth that can’t be ascertained apart from persons.  This is the reason why the phrase I believe in science is so absurd.  Nobody believes in science, because its object and method do not demand that kind of rational response.  But do I believe that I exist?  That the Matterhorn exists?  It is simply impossible to logically prove.  It belongs to another order of human rationality, and though transcendent of the scientific realm, is nonetheless real knowledge.

This impasse of belief concerns the relational nature of belief.  Relationality presumes the other – the capacity of an encounter with the other.  On the divine order, this is not something we can conceive, but only receive.  For this reason, the world’s most brilliant people are both faithful and unfaithful – it’s simply not a question of intellectual precision and rational aptitude.  There must be something more, a question of relationship – more precisely, a question of capacity for relationship.  And the question of why we climb mountains, though nowhere near this question, can certainly point the way.

III.  Why: An Existential Structure

Man is meant to ask the question why.  It is conditioned by his nature, formed into the fabric of his being, independent of his understanding and consent.  A good definition of religion (that most despised and hated of words!) is nothing other than the capacity to allow this existential structure to flourish.  Religion is simply the lived acknowledgement that I am existentially structured to ask the question of why.  Fr. Luigi Guisanni, one of the great minds of the last century, has the foresight to see this in his high school classroom: We must bring this construct to the fore if we want modern men and women to have the possibility of Christian faith.  And he formed it well in the outrageous and fantastic persona of Fr. Lorenzo Albacete.  In his book God at the Ritz, Albacete returns again and again to the distinctive reverberation of this most basic of questions.

“Atheism likes to present itself as the ‘open,’ liberating way of life when compared with what it perceives as the limiting, self-denying religious way of life.  And yet, in terms of the most fundamental desires of the heart, atheism seems to require that we suppress our most intense experiences, the experiences of needs that define us as concretely unique and unrepeatable persons.  In short, atheism asks us to suppress the question of ‘Why?’”

The Catholic faith is not a system of which we assent; it is a reality that we have stumbled upon.  But as a reality (in fact the reality), it is the most limitless, expansive and intensely comprehensive possibility for any human life.  In other words, only the Catholica confronts me in such a way as to call this existential structure (the question of why) to make a full account of itself.  To flee from it is understandable, but only in the way that pusillanimity and cowardliness are understandable.

As long as the faith is proposed as a self-help program, we will fail the re-evanglize the secular West.  Enough of trying to convince people that we can make them better with God.  It may be true but it entirely misses the point: it is a thoroughly modern conception to chose faith because I find it to be the right worldview for me.  And all claims that faithfulness makes one better, happier, more wholesome and holier – even if true – will most likely be rejected by the post-modern mind.  It would do us well to take a different approach, a more foundational approach — the kind of which we saw when Albacete would laugh and drink wine, leaving the militant atheist Christopher Hitchens confounded in his ire.

What is distinctive of the Christian claim?  Why are we doing this and what makes it different?  Because it’s there.  Indeed, it is there – but there is more – there is one more step.

The deepest questions of the human heart (which we call the existential structure of Why) are conditioned entirely by the fact that we are made to be with.  Balthasar calls this mitsein, the German word for “being-with” which he develops from the Dialogical School of Mikhail Bakhtil.  He writes:

“The developing human being (once more in contrast to the animal) is intrinsically ordered to ‘being with’ [mitsein] other men, so much so that he awakens to self-consciousness only through the other human beings, normally through his mother.  In the mother’s smile, it dawns on him that there is a world into which he is accepted and in which he is welcome, and it is this primordial experience that he becomes aware of himself for the first time.  This founding event of human existence, whose import has been duly recognized only in our own day, accompanies the other functions of growth and upbringing: the feeding and care of the child, his invitation into the environment and his historical tradition.  Long before the child learns to speak, a mute dialogue unfolds between mother and child on the basis of the ‘being with’ that is constitutive of every conscious human being.”

If we want to live and communicate faith, we have the simple (yet arduous!) task of removing the ego, so as to be free to be with.  Any intention to embrace the life of faith in a way that is self-referential and egocentric will end in utter confusion and interior collapse.  The seemingly titanic struggle to define one’s freedom apart from God and his Church is nothing other than a well-intentioned narcissism at the service of the ego’s self-preservation.  Do not be fooled by the semblance of existential command they may wield; it is nothing but an attempted pilfering from the omnipresent God.  Despite the majesty of the world’s most imposing peaks, nothing is more dramatic than the mute dialogue of a mother and child, as a little consciousness comes to know that existence is always constituted as being-with.

Why climb?  Why believe?  I guess its rather quite simple.  Or is it?

adventurecourageculturemasculinityvirtue
08 23 2016
Back to all articles

An Interview w/ the Resident Catholic Monarchist of the Daily Wire: Paul Bois