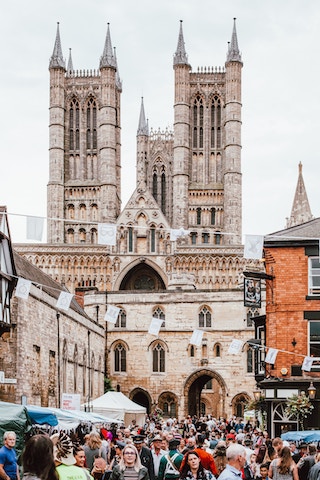 In his 2008 Address to the Representatives From the World of Culture, Pope Benedict XVI gave an illuminating analysis of the Christian roots of European culture. Reflecting upon the aim and purpose of the early monastic communities that arose in Europe, Benedict makes this startling claim:

First and foremost, it must be frankly admitted straight away that it was not their intention to create a culture nor even to preserve a culture from the past.  Their motivation was much more basic.  Their goal was: quaerere Deum.  Amid the confusion of the times, in which nothing seemed permanent, they wanted to do the essential – to make an effort to find what was perennially valid and lasting, life itself.  They were searching for God.  They wanted to go from the inessential to the essential, to the only truly important and reliable thing there is.  It is sometimes said that they were “eschatologically” oriented.  But this is not to be understood in a temporal sense, as if they were looking ahead to the end of the world or to their own death, but in an existential sense: they were seeking the definitive behind the provisional.  Quaerere Deum: because they were Christians, this was not an expedition into a trackless wilderness, a search leading them into total darkness.  God himself had provided signposts, indeed he had marked out a path which was theirs to find and to follow. This path was his word, which had been disclosed to men in the books of the sacred Scriptures (Pope Benedict)

At the conclusion of his address, Benedict observes that “our cities are no longer filled with altars and with images of multiple deities.  God has truly become for many the great unknown…A purely positivistic culture which tried to drive the question concerning God into the subjective realm, as being unscientific, would be the capitulation of reason, the renunciation of its highest possibilities, and hence a disaster for humanity, with very grave consequences.” When we read this assessment, we are almost naturally led to respond that what must be done is to create, and build up, a genuinely Christian culture, perhaps in a mode that looks similar, yet still different, to the early monastic communities. At the same time, Benedict’s insight regarding what the early monks were doing seems to leave us puzzled, maybe even somewhat concerned. For he tells us that the monks did not intend “to create a culture, nor even to preserve a culture from the past.” In other words, in Benedict’s estimation, there seems to be something more fundamental, a deeper principle at work here that needs to be explicated even before we begin to consider the question of a Christian culture.

What needs to be addressed concerns the nature, and purpose, of Divine Revelation. St. Thomas Aquinas deals with this matter succinctly when considering whether the science of theology is equivalent to wisdom:

Therefore, he who considers absolutely the highest cause of the whole universe, namely God, is most of all called wise. Hence wisdom is said to be the knowledge of divine things, as Augustine says (De Trin. xii, 14). But sacred doctrine essentially treats of God viewed as the highest cause—not only so far as He can be known through creatures just as the philosophers knew Him— “That which is known of God is manifest in them” (Romans 1:19)—but also as far as He is known to Himself alone and revealed to others. Hence, sacred doctrine is especially called wisdom (Summa Theologiae, I, Q.1, A.6).

Notice that for St. Thomas, theology primarily inquires into what it is that God has revealed about Himself, those truths that the human mind is unable to reach without God making it know. As such, the purpose for God revealing Himself to human beings was so that we could know Him as He is known in Himself alone. God has shown Himself to us so that we could be given the gift of salvation, which is the ultimate end for which we were made. This is the central meaning of the Gospel, the “glad tidings” that harkens gratitude and awe in recognition of the fact that God has sought us out.

What is key in this understanding is not only what is revealed, but also what is not. For example, Christian revelation does not explain the precise, minute details of how human beings ought to organize themselves in this life. There is not one form of political rule that is most in accord with the teachings of Christian revelation, for salvation is something that can be given in any regime, good or bad. Nor is there one form of economic arrangement that can be discovered by turning to  the written word of Sacred Scripture. As a result, perhaps we could say that since revelation does not solve or answer such questions, then it is really an impetus to turn our attention to other forms or sources of social, cultural, and political wisdom. Even though not ultimately concerned with salvation, these sources nonetheless would be a fundamental aspect of the wisdom of Christian revelation, since truth is considered to be a unity, and because truth cannot contradict itself. Revelation is thus understood to be an affirmation that it does not need to treat every facet of human life and existence, and is an acknowledgment that truth does exist outside of its own sources since, as I mentioned, truth is an organic unity, akin to a symphony. This is why St. Thomas says that the wisdom given in revelation is the highest kind, not that it is the only kind.

This truth is one which makes Christianity unique among other religions. Remi Brague recently made a similar claim: “Christianity never claimed to produce a full-fledged culture. Huge chunks of human experience are left outside of the pale of revealed truth, entrusted to human intelligence” (Remi Brague). This understanding of Christianity would be in opposition to much of the historical teaching within Islam. The predominant self-understanding of Islamic thought is that there is no source of wisdom or truth to be found outside of its own religious texts and traditions. In other words, social, political, and economic arrangements are fully articulated within Islam and its sources in such a way that its adherents need not look to any other text or thinker for wisdom. It is a rather self-enclosed religious worldview.

For Benedict, building up and fostering a Christian culture was not the primary goal of the early European monastic communities. Instead, they were seeking to find the God that had made Himself known, and who wanted to give to them the joy and sweetness of His salvation and inner life. In this light, culture perhaps could be seen as an analog to creation: it comes to exist out of abundance and goodness. In this regard, culture does not come to exist out of necessity, but as the result of an overflow of Being which cannot but be diffused outward. And it is in this light that we Christians today are like the early monastic communities, for we are looking and searching for the very foundation of culture, and which is told in the motto: Quaerere Deum.