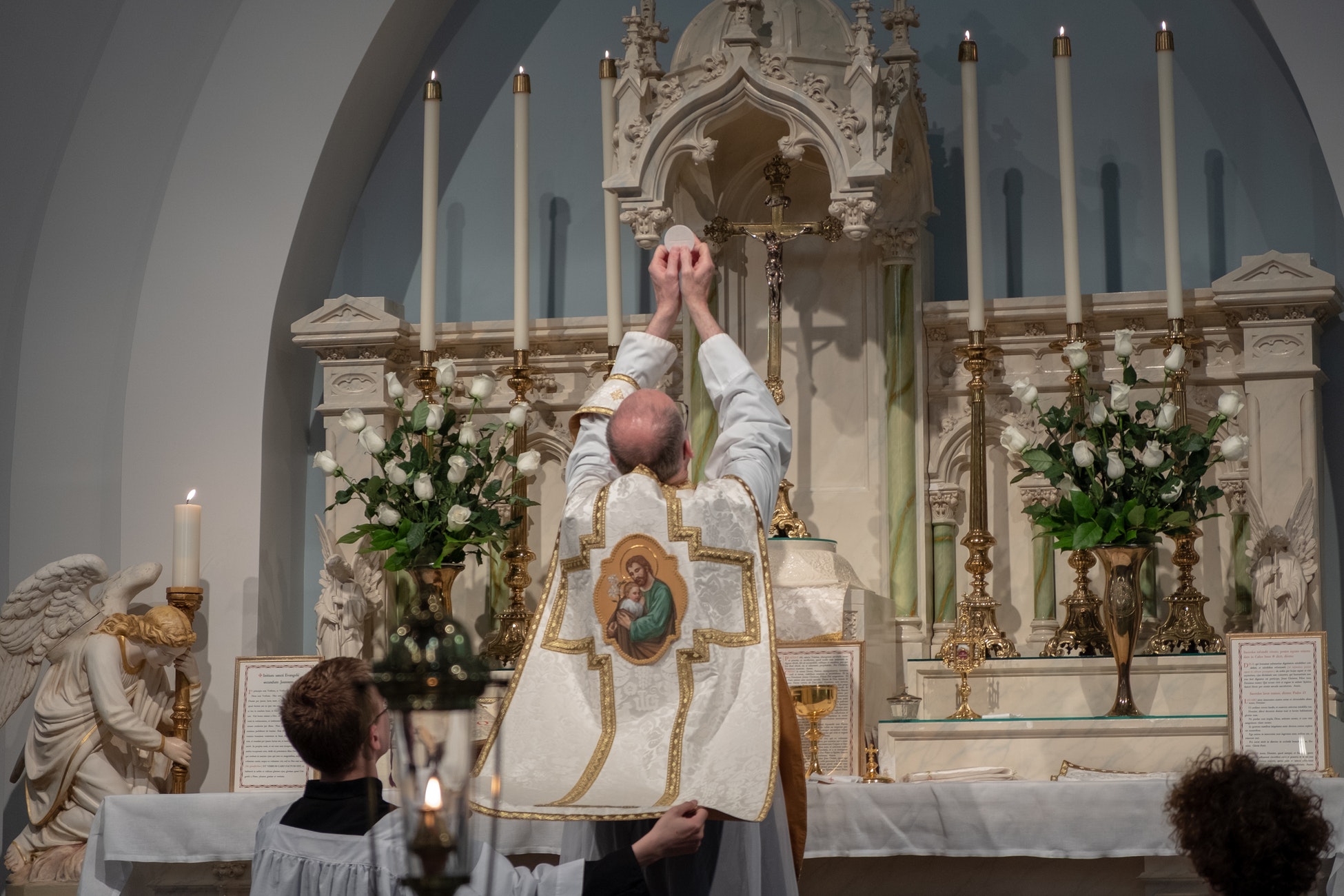 Twice a year Devout Catholics find themselves wondering who is parked in “my spot” and who is that sitting in “my seat”. This selfish thought creeps in and causes many to be led into anger during these most beautiful times in the Church’s seasons. The times are Christmas and Easter, and it is the time when the ‘Creasters’ come to Mass. (Do not read that sentence in a despairing fashion or with a negative connotation.) As a means of description, Devout Catholics refer to those who go to Mass on a weekly basis (every week). Those known as Creasters are the people who come for Christmas and Easter, hence, Creaster.

Within the Mystical Body of Christ there is a division of those who are devout, going to Mass every Sunday and receiving the Sacraments in a state of grace after having gone to Confession. Then there are the ‘Creasters’ who attend Mass twice a year, possibly not going to confession and receiving the Sacrament in Mortal Sin (if this pertains to you, go to confession). This should never be seen in a negative light. Why? That is because they are participating in the highest form of prayer, the Mass. This message can be best understood through the interpretation of a parable from Matthew.

Within Matthew 20:1-16, the passage also known as, The Workers in the Vineyard exhibits the same feelings that Catholics have during Christmas and Easter. The passage reads…

“The kingdom of heaven is like a landowner who went out at dawn to hire laborers for his vineyard. After agreeing with them for the usual daily wage, he sent them into his vineyard. Going out about nine o’clock, he saw others standing idle in the marketplace, and he said to them, ‘You too go into my vineyard, and I will give you what is just.’ So, they went off. [And] he went out again around noon, and around three o’clock, and did likewise. Going out about five o’clock, he found others standing around, and said to them, ‘Why do you stand here idle all day?’ They answered, ‘Because no one has hired us.’ He said to them, ‘You too go into my vineyard.’ When it was evening the owner of the vineyard said to his foreman, ‘Summon the laborers and give them their pay, beginning with the last and ending with the first.’ When those who had started about five o’clock came, each received the usual daily wage. So, when the first came, they thought that they would receive more, but each of them also got the usual wage. And on receiving it they grumbled against the landowner, saying, ‘These last ones worked only one hour, and you have made them equal to us, who bore the day’s burden and the heat.’ He said to one of them in reply, ‘My friend, I am not cheating you. Did you not agree with me for the usual daily wage? Take what is yours and go. What if I wish to give this last one the same as you? [Or] am I not free to do as I wish with my own money? Are you envious because I am generous?’ Thus, the last will be first, and the first will be last.”

In this passage there are multiple messages that should be highlighted. Namely, God’s grace, symbolized in the landowners pay is abounding and people are selfish no matter how much they possess. Whomever reads this Scripture can place themselves somewhere in the passage. Whether it be in the workers who worked the whole day, maybe the Cradle Catholics, or those who worked from noon on, representative maybe of those who have reverted or converted late in life or those who worked at five, the ‘Creaters’, no matter where someone is on the list they are Catholics nonetheless. The reading highlights the ire of the workers that worked the whole day, and how often do the Devout Catholics find themselves to be in this same predicament? Often, in the opinion of the Devout Catholic, they think they are somehow entitled to more grace or more love from God, maybe even both. Though like the Landowner, God allows those allotted to praise Him equal wages. ‘Creasters’, come to Mass twice and both times they receive the same graces that those who go to Mass every Sunday do. What they lack is the relation with the ‘Landowner’. Going to Mass every Sunday gives the Devout Catholic a much better relationship with God himself. Thus, the Devout Catholics should not be envious of the ‘Creasters’ or selfish or even angry because of their presence, rather they should pray for and be saddened by the relationship they lack with God.

Now, this is not the opinion of all devout Catholics toward those known as the ‘Creaters’, rather some find joy and seeing the vast array of people at Mass. Some people find comfort seeing many Catholics, after observing all the darkness of the evil one. This view, joined with the joy of Christ’s Birth or Christ’s Resurrection, depending on the season, Catholics should find great happiness in, as it provides Christ the highest honor possible.

Revisiting the parable, the workers who from the beginning, toiled and earned the same wage as those who came later are payed the same and the laborer’s become selfish. Why? Perhaps they are persuaded by Capitalist ideals? Or maybe they lived in a competitive economy driven by humanistic philosophy? No. It is because the laborers thought they deserved more, even though they only agreed to work for the assigned ‘daily wage’, as the Gospel reads. The money is the landowners, so, why should the laborer’s care anyway? The landowner can be as charitable as he wants because it belongs to him. In the story, the landowner, who is representative of God is as chartable as God is charity itself. Since God can be nothing else, but charitable, in His justice. Likewise, the landowner exhibits his abounding charity.

Too fast are Devout Catholics to compare and to believe that they should have received more than their allotted portion. How selfish.

I until this year I had the early laborer’s perception. I believed that only the Devout Catholics were worthy of God’s grace. Now I realize that my perception was wrong. ‘Creasters’ should be celebrated and treated with respect. They deserve to feel welcomed and loved, as though they were the Prodigal Son. Never as Catholics can we take a vacation from charity. For 50 weeks out of the year our brothers and sisters in Christ are lost, but for two weeks out of the year they are found. Is it their fault? Yes, though the blame does not just belong to them, but also to those responsible for their Catechesis. ‘Creasters’ are worthy of blame because they know they should attend Mass, yet they only go twice a year. I would bet it is because they do not understand the Mystery of Faith, The Grace of the Sacraments, or the source and summit of our faith, the Eucharist. The blame also belongs to those responsible for teaching them poorly.

I hope this article will inspire an attitude of Joy as joy should be the focus of these most sacred seasons when our brothers and sisters in Christ return again. Also, I wish that those who have felt this contempt for ‘Creasters’, as I have, would observe its sinful affect and cleanse it from themselves in Confession. Likewise, to the ‘Creaster’, I hope they observe their faults and ignorance to God’s love for them. Seeing, the grace they receive from Him regardless, along with the opportunity to confess their sin’s. If you do not believe in Confession just know that it is a doctrine of the church which you cannot deny, because “We can’t claim to be part of the people of God but separate ourselves from the structures of authority in the Church…it is the bone and muscle of the Church”. Besides if you do not believe in its efficacy what do you have to lose by telling him? The Priest who will not ever remember or repeat your sins.

creastersselfishness
05 26 2019
Back to all articles