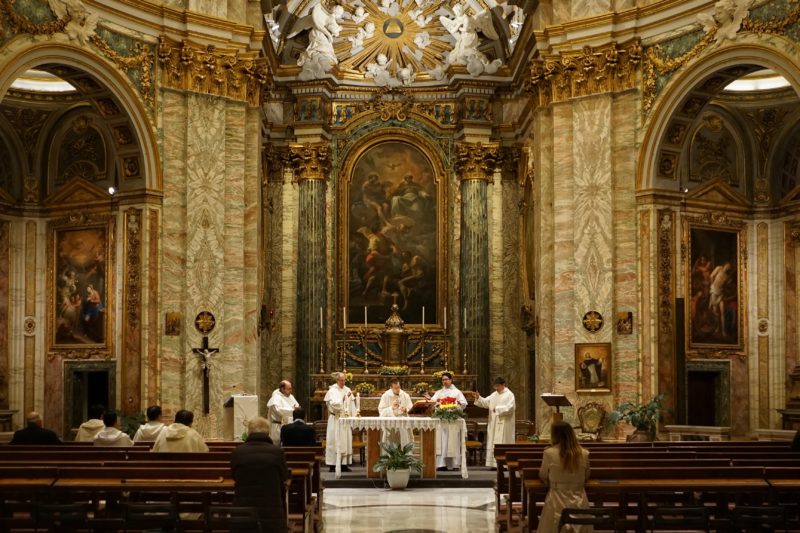 When I converted to Catholicism from Protestantism, one of the main reasons was Apostolic Authority. For a Protestant this is a bigger concession than a cradle Catholic might realize.  Protestantism, despite claims to the contrary, is a radically individualist approach to faith.  The two pillars of the Protestant Revolt were “Scripture Alone” and “Faith Alone,” meaning that the Bible is the highest and only authority for the Christian and faith is the only requirement for salvation.  In practice, especially in America, this means that “me and my Bible are infallible and my personal relationship with Jesus is my business.” The Protestants that I knew and know are deeply sincere and committed to Christ, but they, as individuals, have the final say in matters of faith and morals.

The Catholic, on the other hand, submits to the authority of the Church as exercised by the Pope and the Bishops in union with him.  If I don’t like what’s going on I can’t just go somewhere else.  This is the Body founded by Christ from which I separate at the risk of damnation (as in the case of excommunication and mortal sin). It can get bumpy, but I’m all in.

Today, in the light of the seemingly never-ending era of sex abuse scandals in the clergy and episcopate, perhaps this submission to men might appear to be more, shall we say, embarrassing?  Why give so much credit to sinful and fallible men?  Have they not lost the right to speak?  Have we not lost the stomach to listen?  They actually seem surprised that serious Catholics are not immediately jumping ship when the latest scandal drops.  I’m not surprised, because these scandals do reveal and tell us some things, but it is important to know what it does and does not say and to not allow interlocutors to have free reign over the narrative of what scandals mean.

One of the main charges that shows up repeatedly in comments and commentary is that the pedophile and predatory actions of many clergymen is proof that celibacy is a problem. But, there are hundreds of thousands of celibate men in the world, and it does not follow that because some are predators that all of them are.  As Christ said, some are eunuchs from birth and some are so for the sake of the Kingdom of God – like Jesus and St. Paul.

There is not an inherent reason for celibacy to lead to predatory behavior.  This charge gets repeated frequently, but this assumes human sexuality is an expression of an inner beast that must be appeased by more tolerable sexual expression so that it doesn’t explode into what we see in the headlines, as if every married man is really a tamed monster – think of an ancient volcano god that requires a few kids thrown in to keep from erupting. The biggest pedophile rings that get busted here and there (like this one) are not made up of celibate men denied sex, but of men that seem to get lured down the world of promiscuity and pornography to, one day, find themselves as certifiable (and certified) perverts.  In short, it is not less encounter with ordered sexuality in marriage that causes trouble, but more encounter with disordered sexuality that causes trouble. What the media and talking heads refuse to admit is that these men have been ushered down that path by the Sexual Revolution itself, because perversion begins in separating procreation from human sexuality – from there its just degrees of perversion; the heat just gets hotter.

In fact, many of the scandals reveal what many people considered “fringe” theories to be correct – that there is a “lavender mafia,” a network of homosexuals within the clergy and episcopate that protect and promote their own.  Rod Dreher has been on a tear about how “everyone knows” but no one does anything about these sorts of networks.  Ross Douhat recently talked about dismissing a crazy “traditionalist” guy that was railing against networks of homosexual clergy, only to find out later he was spot on.  One of the men the crazy guy barked about was Cardinal McCarrick, who was just revealed to have been a sort of king pin in this regard – or a sick uncle.  I have no reason to not believe this network exists, since I have had it confirmed by friends in seminary, the priesthood, and even monasteries.  Pope Benedict is reported to have been exacerbated by this “lobbying” group. This, however, does not prove that celibacy is a driving cause of the sexual abuse scandals, but homosexuality is, which the infamous John Jay report clearly showed.  Again, it is the infiltration of the Sexual Revolution that causes problems, not the non-embrace that celibacy proclaims.

So, is this all embarrassing?  I guess. The most basic understanding of the doctrines of the Church, however, attests that we do not believe that men are sinless because they are bishops.  The Sexual Revolution is dismembering families much faster than the the lives of those that are unfaithful to their priestly vocations. And in both cases the role and vocation to fatherhood – natural and supernatural – is intact even if many men fail or pervert it.  I think I speak well for many red-blooded Catholic men that would simply say, “Clean up your house, kick out the perverts, and get back to work.”

Given how many married laymen are living destructively in regards to human sexuality, I have no reason to think that celibacy has a special role in causing perversion.  In fact, the vibrant zeal of orthodox and ordered priests today is a witness to men in their marriages.  Their total gift of self is an image of masculinity that we men need today, to remind us that we are not beasts that use our wives to sooth our impulses.  We are all men called to give sacrificially to our brides, to order ourselves toward that end, and to defend and display the power of love.  Living a higher form of that love in celibacy is a witness the Sexual Revolutionaries are irritated by.  That’s a good thing.

celibacyclergyscandalsexuality
06 27 2018
Back to all articles

Are You Defending Freedom? An Independence Day Reflection