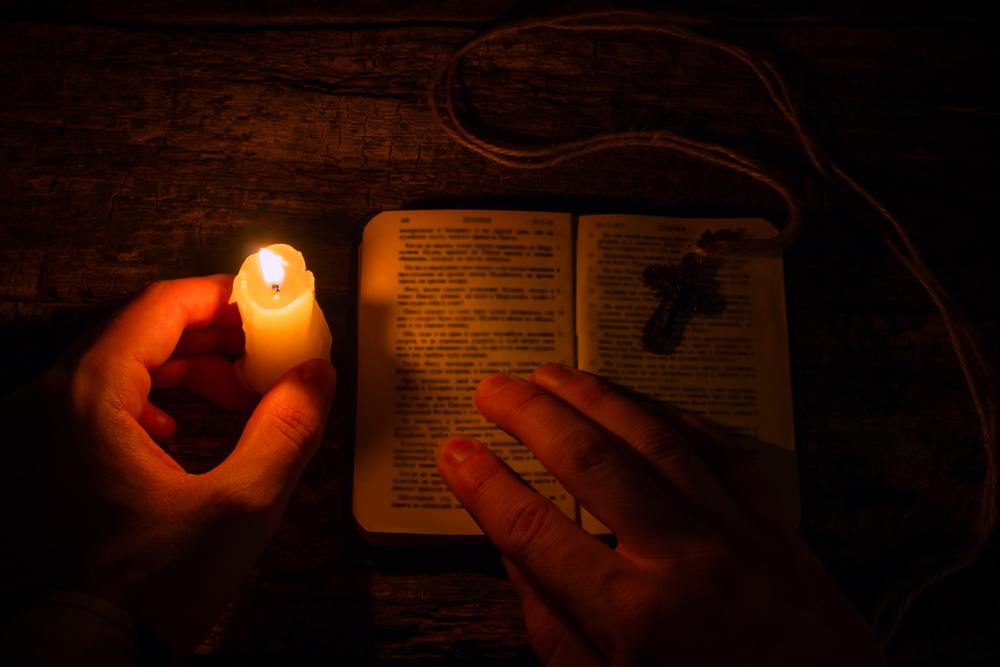 The loss of a sense of interiority ranks among the most crippling illnesses of the present age. To an alarming degree, many are losing the capacity to recognize the complex system of thoughts, desires, subconscious influences, fears, emotions, unspoken motivations, and preconceptions that underlies their thoughts, actions, and perceptions of the world. The evidence of this lack abounds: we see it in the culture’s ideal of busyness for its own sake, in the visible incapacity for communication and dialogue, in the increasing tyranny that one’s prevailing emotions yield over his actions and interactions, in the consistency with which anger and rage spring up in individuals, and in the oppressive sense of meaninglessness that haunts so many.

This collapse of the inner life also erodes the ability to discern the action of the Holy Spirit and the will of God in one’s life – for the Spirit’s guiding voice will always remain a still, small one (1 Kings 19:12), loud enough to be perceived, yet soft enough never to compel cooperation. God speaks and directs us, though it happens beneath the surface level, where our minds are occupied by our current moods, emotions, and wants.

This lack of interior awareness and (as a result) of attentiveness to the Holy Spirit affects the Church immensely. It can be seen in the unbridled, directionless enthusiasm of many who think they are serving God when, in reality, they only do so according to their own plans, timetables, efforts and, most consolingly, their own will. It appears, likewise, in those who have discovered disappointment, misunderstanding, and the hard-heartedness of those they strive to serve in their vocation – failing to hear the encouraging and nourishing voice of the Spirit causes them to reevaluate things: “Perhaps this isn’t really my calling after all,” they say. It is seen in the countless number who have rejected the reality of divine communications because they have never felt them on the surface level. And it bubbles up in the general mediocrity, boredom, and tepidity with which the idea of the universal call to holiness is received.

Clearly, learning to live beneath the surface of our awareness and to be alert to the Holy Spirit stands out as a priority for many of us. Of course, there is never 100% certainty in discerning the Spirit’s action (nor should there be, if we are to remain truly free and not become mere automatons or cogs in the machine of God’s providence). However, general rules do apply here that allow one to perceive the genuine promptings of God within. Here are a few practical steps toward growing in this art of attentiveness:

Step 1: The Rest of the Iceberg

We are a lot more complex than we think. Beneath the ideas, desires and emotions with which our intellects and wills are immediately occupied lies a whole system of other influences that we don’t often consider. The problem with trying to recognize the voice and direction of God is that we often confuse his voice with others that compete with his. The first step toward discernment, then, is to recognize the voices and movements of our souls that escape our attention:

God’s voice is the most primary and real. The Lord speaks to us through the movements of our intellect and will by the inspirations of his Spirit. These movements are always toward what is good, even though this may sometimes be difficult or frightening.

We bring a lot of baggage to the table in the work of discernment. Our own desires, moods, fears, emotions, and personal histories can affect our ability to hear God’s voice both for the good and the bad. Additionally, we recognize that we are each damaged by Original Sin: fallen creatures with desires that are disordered and that (while seeming good) don’t actually lead to real fulfillment or peace.

Many times, temptations and bad influences come simply from ourselves, from our distorted desires and misconceptions due to Original Sin. However, to ignore the existence of the Evil One and demonic forces that act upon us, though in vogue, would be highly dangerous. Often, the temptations that Satan uses against those seeking to do God’s will are very subtle, making the action appear good or to be from a good motive while in fact it leads to further disorder and evil in the world and our lives.

The Fall affects the world in which we live as much as it does each of us. The world presents so many false ideals and aspirations to our minds and hearts – money, the ego, the esteem of others, the perfect physique, comfort, and freedom from suffering, to name a few – that easily lead us astray and prevent us from seeking the will of God as our primary motivation and desire. Our discernment is impacted to the extent that we have accepted these things (even implicitly) as the major end of our lives.

Step 2: By Their Fruits You Will Know Them

After having developed a healthy attention to these various voices and movements of the soul, we logically have to ask how it is that we recognize which is the voice of God. Jesus provides the working principle here in Matthew’s Gospel: You will know them by their fruits. Are grapes gathered from thorns, or figs from thistles? So, every sound tree bears good fruit, but the bad tree bears evil fruit (Mt 7:16-17). An attentiveness to the movements in one’s soul provides the foundation for this evaluation. The “tree” here refers to any of the influences discussed in Step 1. The fruits are the consequences of acting upon these different influences.

A “sound tree” (the influences and direction of God and that part of us which strives to do his will) leads to good fruit. This good fruit is broader than often we think: an increase in faith, hope, or charity; growth in patience, humility, or the ability to bear with others; joy; a spirit of self-giving; the edification of others; and more.

A “bad tree” (motivations from the part of us which is fallen and disordered, from the Evil One, or from the false ideals of the world) will produce bad fruit. Though the outcome may at first provide some form of pleasure or delight, we find that this is only fleeting and we are left with the real fruit: sadness, bitterness, and resentment; anger; a spirit of pride and victimhood; depreciating others; self-isolation; the overwhelming feeling of being tired and sad without knowing why, and the like.

The third step involves reflecting upon the changing state of one’s soul and the tree that bore these fruits. Of course, this is not a clearly-labeled, two-tier process – in real life, it appears to us as a single, flowing chain of influences, choices and consequences. With practice, though, a person can become more capable of discerning theses movements and the effects that they produce in him.

Relating good fruits to certain movements of the soul allows us to identify them as influences of God that should be followed; in the same vein, relating the bad fruits to the movements that engendered them allows us to recognize the deception of our fallen nature, Satan, or the alluring emptiness of the world. Prayer is absolutely essential for this to happen (especially the practice of an examination of conscience at the end of each day). The help of a spiritual director or confessor also offers a good support if certain things remain unclear.

With time, a person becomes capable of reading certain movements without the process of trial and error to see the fruit. The heart becomes attuned to the different influences pressing upon it and learns how to respond in the moment. Of course, the good movements of the soul are to be accepted and followed, the bad to be rejected.

This process requires constant attention, reevaluation, and docility. It demands an effort and awareness that cause us to delve beneath the surface, where it can be so effortless and delightful to live…until there comes a time that it’s not. Though challenging, choosing to live beneath the surface and seek the sure guidance of the Holy Spirit always yields good fruit and brings the joy that only a life led by God can offer.