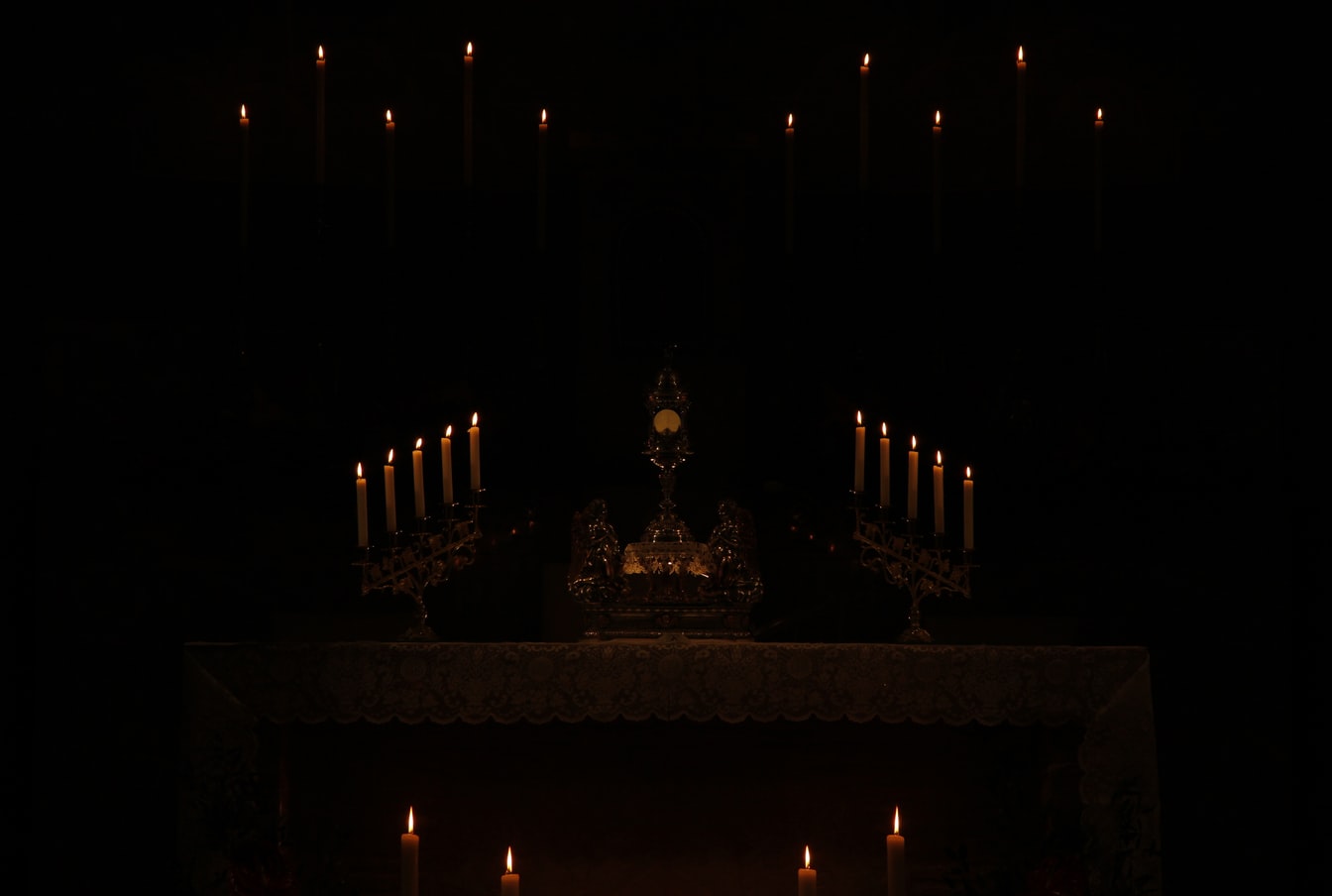 I turn down silly love songs on the radio for the same reason I turn down advertisements: they too often attempt to bypass the will and intellect and misuse the emotions.  The silly love song, perhaps, is merely overstating some of the feelings of young love to make us feel… whatever.  Advertisements, on the other hand, are deliberately trying to make you feel a certain way so that you will respond by purchasing the product.  Both are utilitarian abuses of human desire.  Sure, with ads everywhere we can grit and bare it and just wait for them to end, or we can secede from the spectacle altogether, insofar as possible, rejecting that advertising in its current form is acceptable at all.  As I don’t let companies use my family’s bodies to advertise their wares through obnoxious and status-proving logo placement – we are made in the image of God and being a human billboard does not respect that – so too I don’t want to passively let in the violent sentimentality that is modern advertising.  And we all know it is the worst in the holiday season.

G.K. Chesterton famously hated what advertisements does to the visual landscape, and we could apply that to the radio and even the landscape of the inner man. “It is really not so repulsive to see the poor asking for money as to see the rich asking for more money,” he quipped.  “And advertisement is the rich asking for more money.”  We might scoff at this as socialist, as so many do with Chesterton’s writings, but is it not true that the poorer the place the more advertising is there?  Can you imagine walking into a fine country club and seeing anything more than a tasteful sign for where food can be located?  Does an orchestra allow for commercial breaks for electronic cigarettes?  The poorer the place (and, therefore, more desperate for solutions to compiling problems), the more desperately the wealthy expose their desire for more wealthy, and the more shamelessly the exploit true human needs. “Buy now!”  “Don’t miss out!”  “You can look like this too!”  Picture a lower-class gas station – there’s no visual rest from signs for lotteries, beer, cigarettes, toys, and sugar in an endless array of colors and flavors.  Advertisement promises you will feel good, or, when we see happy, pretty, successful people using a product, we’re supposed to think the product will do that for us too.

There was a time when advertisements did attempt to appeal more to reason.  This changed, according to Neil Postman in his book Technopoly, when advertisers realized hitting you in the “feels” was a better place than appealing to your intellect, explaining why a product is good.  Now we explain why you will be good when you have the product.  Pure lusts aside (see that oxymoron there?), many advertisers use symbols of love, family, happiness, and joy to hawk their goods – and a big dose of status signaling.  It is what we do treasure (rightly) that makes for the most profitable marketing, not what we don’t care about.  Therefore, by using the symbols of those treasures like love, family, and home, an advertiser “[does] not blaspheme but trivializes” those symbols, according to Postman.  Someone who blasphemes a sacred symbol actually acknowledges its sacrality.  (Consider how images of the devils in movies can move us to piety.)  On the other hand, someone that uses sacred symbols in vein (for gain) lowers our sense of dignity for that which the symbol represents.  In an age drowning in symbols (pictures, images, signs), the power of symbols is cheapened overall.

Postman thinks we must trivialize the sacred in our modern “technopoly,” because the adoration of our new order “pre-empts the adoration of anything else.”  In other words, if we love holy things too much we won’t adequately participate in the consumer society.  Sentimentalism – bouncing around a world of images and ads based on how they make us feel – causes us to adore the feeling of love, which is not an act of love at all.  Ramano Guardini said sentimentalism is “the desire to be moved,” and we’re all affected by that desire sometimes.  But to desire things for how they make us feel (or for how the advertisers say they will make us feel) is very much an abuse of the senses, which are meant to draw us toward natural goods and, by grace, to higher and supernatural goods – i.e. they have an end beyond the often feeble and faltering feelings that accompany them.  The sentimental, therefore, cannot find mature and true love.  But, the more frantic we search for it, and the more unsuccessfully, the better.  This is very profitable, which is the point for those reaping the rewards.

If the advertising culture of sentimentality “pre-empts adoration,” as Postman says, then true adoration pre-empts sentimentality.  The great Catholic act of adoration is essentially un-sentimental.  It’s hard to imagine how the image and act of a man sitting in silent adoration in a church could be used to sell something.  To the modern eye, the picture is more startling than moving, because it seems to say in itself, “you cannot love God and mammon.”

Part of adoration’s un-sentimentalism comes because basic adoration (gazing upon the exposed Eucharist) is light on “consoling” imagery.  The sacramentality of the Eucharist uses signs visible to the senses, but that doesn’t mean they “make sense.”  Be concealing Himself in the accidents of bread Jesus makes it much harder on our senses then, say, inhabiting a statue like some pagan idol would.  It is not a painting or icon.  To stare at what appears to be bread is not the same at being moved by the Pieta.  The Blessed Sacrament is no grand Chartres Cathedral.  The act of adoration is not explained in words and anecdotes.  It begins in an act of faith, however feebly, that God is there and, therefore, we will go and adore – we were not “moved” by the symbol of the bread, because it isn’t a symbol.  This is why is can be blasphemed and denied but not trivialized.  It just can’t be used that way.

Sentimental has a relation to the Latin word sensuum, referring to what we can and do sense, but in adoration we often sing in the Tantum Ergo with the words Præstet fides supplementum/ Sensuum defectui.  Sensuum defectui is reminds us of our “defective senses,” meaning our senses are mostly powerless here.  We can’t really be carried away by them in adoration, which is why we ask that faith (fides) supply what our senses can’t (supplementum), a movement within us to respond to the truth only faith can see.  Here our senses fail us, which makes it hard to be sentimental in silent adoration.

Yes, it is possible that grace can grip us and we can feel and sense that Presence, but how different is it to begin in an act of faith (something done with the will, directed by the intellect) and then be given the gift of feeling the truth we believe.  Feelings are human, which means they are both good and fallen.  We can have them to good effect, but we can also be deceived by them.  Advertising takes you from the sentimentalism of a feeling to the concrete act of buying.  Adoration takes you from the concrete act of adoring to the feeling that [can] accompany love yet remains meritorious and fruitful if emotional responses never come.

And, in silent adoration, or any austere prayer for the matter, we can reverse the terrible fate of having sentimental faith, which, according to Guardini, “disposes [one] to emotionalism,” which is not faith:  “[When] a believer allows such a tendency to dominate him, it becomes disastrous, robbing revelation of its greatness, distorting the saints, and generally rendering his religious life soft, weak, unnatural, and embarrassing.”  He is not speaking of a spiritual stoicism, which is a form of self-focus, but of spiritual maturity and grit, of feasting on the lasting nourishment of truth and not the quickly passing milk that is given to us in our “young” faith, especially early in conversion.  As mystical theology teaches clearly, God withdraws from us when we begin to love Him for how He makes us feel and not for His own sake.  And adoration, extending out from the intentionally chaste and focused liturgical life of the Church, saves us from that.  Consolations (strong and holy feelings that come by grace) should be welcomed with gratitude, but not sought to the “high” of it.

Now that the great sentimentalizing smorgasbord of pre-Christmas consumerism has passed, let us Christians live in the truth of the season, especially Epiphanytide.  If there is a response to the great Epiphanies of Christ to the Gentiles, it is, with the Magi, falling in adoration.  This is the season where the Magi show us, based on their private study and openness to truth, that we can fall on our knees and adore that which we know to be God, long before knowing how moving His life really will be.  God is here.  This truth should and may move us, yet the weight of the truth itself, that truth alone, weighs us down to our knees in adoration, nonetheless.  In that posture of adoration, we offer Him our heart more than ask Him to move it.  In the quiet of our homes and churches, let’s disallow the noise of the world to enter, and let’s not worry about the dying power of symbols, because here before us we have not the signs of God, but the Son Himself.  Come, let us adore.

adorationadvertising
01 06 2020
Back to all articles

A Marriage Creed: Professing and Defending Truth in a Time of Confusion