We Love Because He First Loved Us 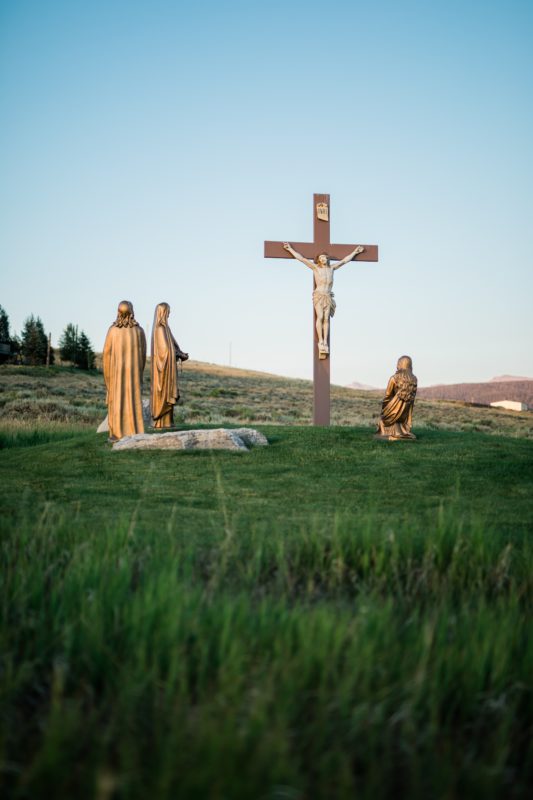 “We love because he first loved us” (1 John 4:19).  These words from the first letter of John beautifully and succinctly sum up the origin and end of the Christian life—which, in a word, is love.  “Being Christian,” said Benedict XVI, “is…the encounter with an event, a person, which gives life a new horizon and a decisive direction” (Benedict XVI, Deus Caritas Est, 1).  That “encounter” is our experience of God “first loving us.”  The “new horizon” that it opens up, the “decisive direction” that it gives to our lives, is love—our love of God and our neighbor because of His prior love of us.  To participate in that endless exchange of love is what it means to be a Christian.  It is the center from which all other aspects of the Christian life emanate.  I fear that a significant number of Catholic men miss this point and regard something other than love as the central point of being a follower of Christ.

What I did not include from Benedict’s quote above is what he says being Christian is not.  It is not, he says, “the result of an ethical choice or a lofty idea” (Benedict XVI, Deus Caritas Est).  To state that more generally, being Christian isn’t primarily about my will or my intellect and what I do with them (i.e., make “ethical choices” and assent to “lofty ideas”).  Rather, it is first and foremost about my heart, my whole person in all its mystery, and what has been done to it by God.  Is it not the case, though, that so many of us fail to understand this?  If we’re honest with ourselves, I think we would have to admit that it is, that we ourselves are among those men who place something other than love at (or at least close to) the center of our “Christian” life…even if we don’t realize it.

This problem, it seems, is precisely what Pope Francis was warning the faithful against in his recently released Apostolic Exhortation, Gaudete et Exsultate.  In it, the Holy Father laments the negative influence of the contemporary forms of two age-old heresies—Gnosticism and Pelagianism—on the faithful today.  He first discusses Gnosticism, which “presumes,” he says, “a purely subjective faith whose only interest is a certain experience or set of ideas and bits of information which are meant to console and enlighten, but which ultimately keep one imprisoned in his or her own thoughts and feelings” (36).   The Holy Father points out further that the gnostic approach “is strict and allegedly pure, and can appear to possess a certain harmony or order that encompasses everything” (38).  On the surface, it may seem all well and good, but it poses this great danger: “to reduce Jesus’ teachings to a cold and harsh logic that seeks to dominate everything” (39).

Of contemporary Pelagianism, the second heresy plaguing the Church in our day, the Holy Father would say that it is “not intelligence that…[takes] the place of mystery and grace, but our human will” (48). As a result, the “worship of the human will” entailed in this heresy leads to “a self-centered and elitist complacency, bereft of true love” (57).  Those are some tough words, but it’s Francis’s words which follow that should really hit home for those of us (among whom I count myself) who are deceived in some way by this heresy.  Here’s what Papá Francesco says the “self-centered and elitist complacency” of contemporary Pelagianism manifests itself in:

This finds expression in a variety of apparently unconnected ways of thinking and acting: an obsession with the law, an absorption with social and political advantages, a punctilious concern for the Church’s liturgy, doctrine and prestige, a vanity about the ability to manage practical matters, and an excessive concern with programmes of self-help and personal fulfillment.

Now, you may not be guilty of all of these Pelagian sins, or of all those of the Gnostics.  It’s possible, perhaps, that you’re essentially blameless in these areas.  Either way, what can it hurt to make, as they say in AA’s Twelve-step program, “a searching and fearless moral inventory” of yourself?  Not much, I would think, but your pride.  In fact, I humbly submit that such a searching inventory cannot only not hurt but is what we as Catholic men must do if we wish to be the Church in the way that Christ intended.

It is for this reason that the Holy Father’s words ring true for me in such a way that they encourage urgency, for the reason, that is, that we are failing truly to imitate Jesus in the way He desires. As I said earlier, if we really look deep, I think we will find we are placing something other than love at the center of our lives, even if only in slight ways.  Some of us, perhaps, are even striving to be “holy” and “blameless” before the Lord in intelligence or in will power, as Pope Francis warned against. Regardless of what it is, if there is anything you place above love, cast it at the feet of Jesus and exchange it for the gift of His love.  For, as Pope Francis reminded us at the very beginning of Gaudete et Exsultate, “the Lord has chosen each one of us ‘to be holy and blameless before him in love (Eph 1:4)’”…not in intelligence, or in will power, or in anything else.  But remember, if we love at all, it’s because He first loved us.  Miss that, and you’re still missing the point.

Christheresyissueslovemodern
08 / 03 / 2018
Back to all articles