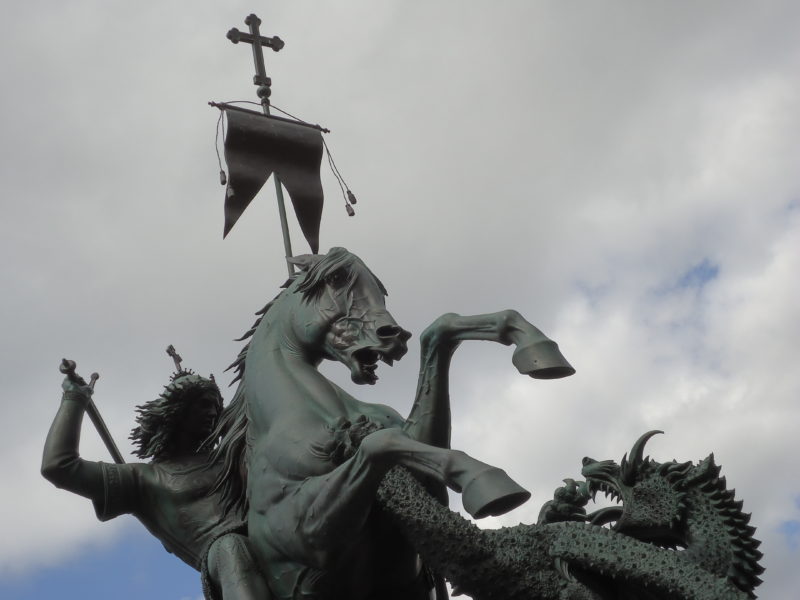 Saint George, patron saint of England and the military, is one of the most popular saints in all of Christianity. We are not sure of his birth date, but we believe he was martyred on April 23, 303 by Emperor Diocletian.

George’s father was from Cappadocia and his mother was from Palestine. Both were Christians and members of the nobility. George served well in the Roman army and was eventually promoted to the rank of tribune giving him direct command over many men.

The Legend of the Dragonslayer

According to the story written by Jacobus de Voragine in his book The Golden Legend, during his military service George traveled to the city of Silene in Libya. In a large pond near the city lived a dragon that terrorized the citizens of Silene with its venomous breath. To placate the dragon, the people gave it two sheep to eat each day, and then a man and a sheep and then, eventually, the people gave the dragon their children.

The children to be sacrificed to the dragon were chosen by random lot. When the lot fell upon the king’s daughter, he offered the people of Silene gold and silver instead, but they refused his offer and threatened to burn down the city if he did not present his daughter to the dragon. After eight days, the king capitulated.

Weeping, the king kissed his daughter, gave her his blessing and sent her to be devoured by the dragon. As the princess, dressed in a wedding gown, stood near the pond weeping and waiting for the dragon, George was passing by on horseback. He asked the princess why she was weeping. She responded by telling him that he could not save her. Then the dragon arrived.

When the people saw the dragon approaching the city they became frightened and began to panic, but George assured them that it was no threat to them anymore. George told them to be baptized and to believe in Jesus Christ and that he would slay the dragon for them, so 15,000 citizens, including the king, were baptized and George slew the dragon by cutting off its head with his sword.

The dragon’s corpse was then removed from the city on four oxen-driven carts and thrown into a field. The king offered George money, but he refused it and told the king to give it to the poor instead. A church was established in Silene and the waters of a fountain there are said to have power to heal the sick.

A Life of Heroic Virtue

The legend of George the dragonslayer is entertaining, but that is not why he is venerated by the Catholic Church. He is venerated for his heroic virtue and martyrdom for his belief in Christ. Jacobus de Voragine describes three of George’s virtues in The Golden Legend:

“George is said of geos, which is as much to say as earth, and orge that is tilling. So George is to say as tilling the earth, that is his flesh. And S. Augustin saith, in libro de Trinitate that, good earth is in the height of the mountains, in the temperance of the valleys, and in the plain of the fields. The first is good for herbs being green, the second to vines, and the third to wheat and corn. Thus the blessed George was high in despising low things, and therefore he had verdure in himself, he was attemperate by discretion, and therefore he had wine of gladness, and within he was plane of humility, and thereby put he forth wheat of good works. Or George may be said of gerar, that is holy, and of gyon, that is a wrestler, that is an holy wrestler, for he wrestled with the dragon.”

On February 24, 303, Emperor Diocletian ordered that every soldier in the Roman army should be made to offer sacrifices to pagan gods. When George learned of this he freed his slaves, gave away all of his wealth to the poor and confronted Diocletian. George’s preparatory actions tell us that he was aware that what he was about to do would get him killed.

Diocletian offered George more wealth and lands than he had ever owned before to keep him quiet, but George refused. Instead, he continued to speak out against Diocletian’s persecution of Christians and courageously proclaimed his faith in Christ. Therefore, Diocletian had George arrested and severely tortured.

Several times while George was being tortured it seemed that God intervened to protect him. George miraculously recovered from severe beatings, torture devices that were used against him malfunctioned and strong poison given to George to drink seemed to have no effect on him. Several witnesses to George’s suffering converted to Christianity, including the Emperor’s own wife, Saint Alexandra who was also martyred.

In an effort to destroy his good name, Diocletian sent a prostitute to George’s prison cell to tempt him on the evening before he was to be executed. Instead of falling to the temptation, George prayed to God and the woman was converted to Christianity. She proclaimed her belief in Christ and was martyred. Saint George was beheaded on April 23, 303.

George possessed many virtues, but it is his example of the virtues of bravery, courage and fortitude which are especially apparent in his story. He voluntarily stepped forward to speak out against the people persecuting Christians even though he did not have to, he continued to proclaim his faith in Christ even while enduring excruciating pain and suffering and his Christian witness resulted in the conversion of many unbelievers to the Christian faith.

Few of us will ever likely achieve a title as great as dragonslayer at the end of our pilgrimage in this life. Yet, as we celebrate Saint George’s feast day on April 23 during this Eastertide, let us contemplate the many ways we might slay the dragons that invade our own lives and become courageous heroes for Christ by taking on more humble titles like dad, son, husband, brother, servant, employee, coach and friend.