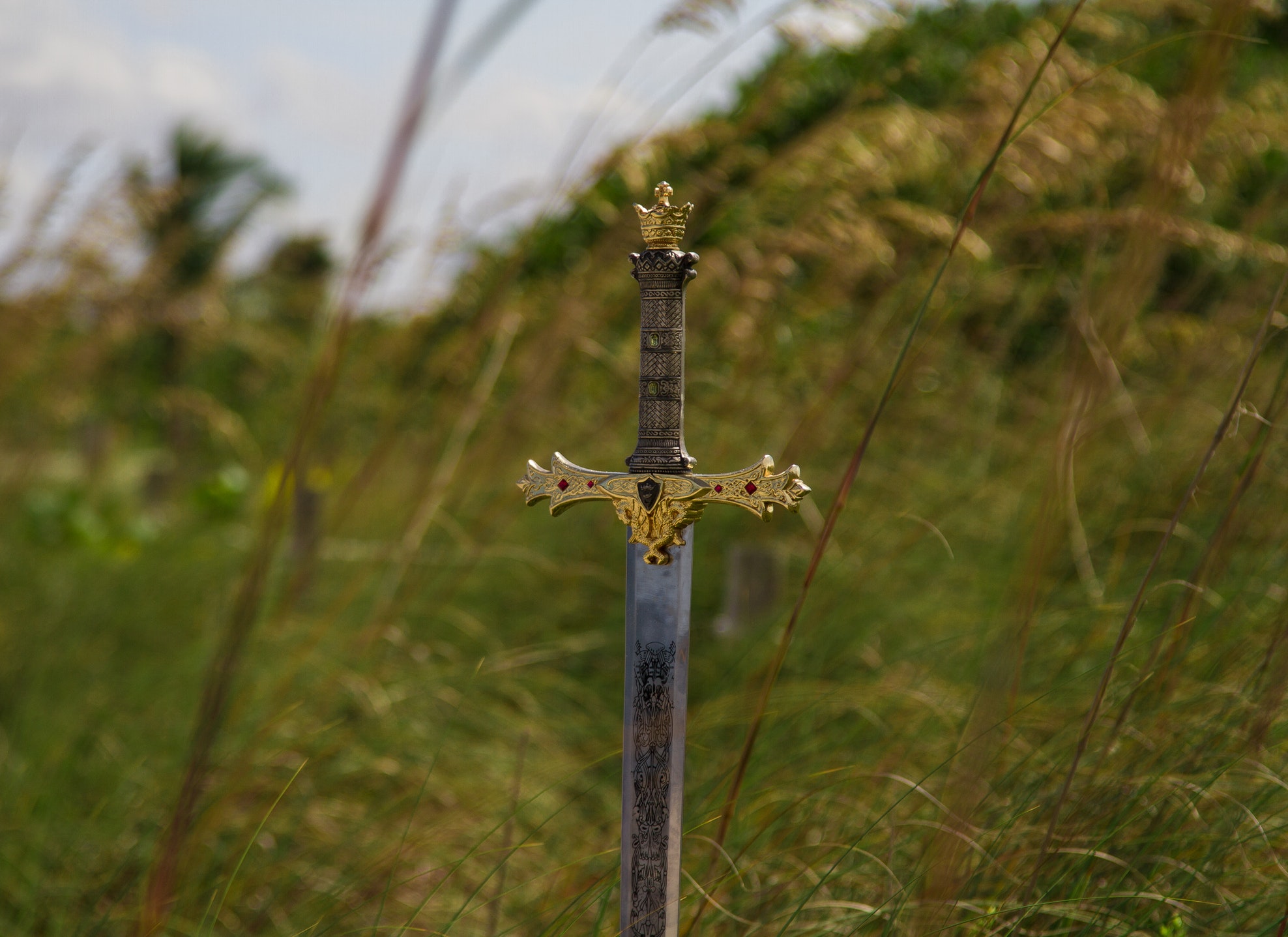 If there were ever a time for a magazine for Catholic men, the time is now.  Sword and Spade is a publication for men that are hungering for more spiritual, intellectual, and cultural depth and formation.  I am happily the founding editor, but I also have a team around me that includes the scholar and the blue-collar man and business owner, because in the days we face now with such confusion we need clarity of truth and the practicality of real experience.  The age of the ecclesial expert and bureaucrat died in 2018.  2019 is the year that reclaims fatherly leadership.

This magazine is by and for Catholic men that know…

…they need a greater challenge spiritually, morally, and intellectually.

…they are fathers in one way or another and need formation to live that fatherhood well.

…they face unique economic and practical challenges particular to the paternal.

…they know the Church is facing massive internal challenges and a crisis of fatherly leadership.

…they need wise words on paper that can be read in silence, free from the distraction of screens.

…they need community, brotherhood, and belonging in a world of isolation and loneliness.

…they need sharp theological and philosophical machetes to cut through the nonsense of the day.

As the saying goes, a fool is his own guide. Only the humble gain wisdom, because true insight is beyond the reach of the ego.  The wise seek guidance, widening their understanding by reaching beyond it.

A foolish man who is a father, mentor, or leader is not a benign threat, because his words and actions have tremendous effect on those in their care and charge.  Foolishness in men compounds in generations and societies.  Sword and Spade fills a critical need to help form and unite men in the pursuit of wisdom, virtue, and sanctity.  If you are one of those men, sign up for Sword and Spade today.

Men are always leaders.  The question is, are they worth following?  Are they leading to the right places and in the right ways?  Are they the example and teacher they are called to be?  “You who teach others, will you not teach yourself?” (Romans 2:21).

The man with his eyes open to reality knows the world is a dangerous place.  Not only do we contend with sin, but we are tormented with torrents of lies, distortions, and disordered loves.  A wise man prepares to be a steady anchor in his family, community, and workplace by being guided by love and wisdom.

Scripture uses two images primarily to describe a man’s duty in relation to his place and vocation: the warrior and the farmer.  The warrior wields the sword in the securing and protecting of the good and the farmer works the spade in the cultivation and provision of the good.  Yes, “God is a warrior” (Exodus 15:3), so we must war as He would have us war.  But, also, “[Your] Father is a farmer” (John 15:1 – Pater meus agricula est).

Distracted and disarmed by sin and error, a man’s weaknesses become the door of disorder and demons.  If he does not fight, his house falls alongside him.  “[H]ow can one enter into a strong man’s house, and seize his goods, except he shall first bind the strong man? and then he will plunder his house” (Matt. 12:29).  Is your home being plundered?

The sword defends what must be defended and attacks what deserves attack. It is the strength unique to men applied to the fights unique to men.  A good sword is sharp on the side of a man able to use it.  The careless and slothful are poor soldiers. Their weapons are dull and leadership vain.  The reckless soldier attacks the wrong things in the wrong ways – like Peter’s swipe at a guard’s ear – wasting time and strength and perhaps causing further war.  The cowardly solider fleas what he should face.

The true warrior is not merely violent, nor does he fight for fighting sake.  He does not fight what he hates but for what he loves.  “For our wrestling is not against flesh and blood; but against principalities and power, against the rulers of the world of this darkness, against the spirits of wickedness in the high places” (Ephesians 6:12).

The soldier – the one who wields the sword – must learn both the ways of the enemy and the ways of heroes.

If a man will fight for what he loves, he must also love well that for which he fights.  Although a man must learn from the soldier, he must remember Adam’s first command: till and keep the garden. The spade is the tool that keeps the garden; it is the application of man’s strength to the cultivation of his domus, his domain.  The end of a father’s fighting – symbolized in the sword – is peace in his place, so that his children and community can flourish and grow toward their true ends.  His sword is necessary, but he eagerly awaits its transformation into a tool of cultivation, an implement that “tills and keeps” the garden. “They shall beat their swords into plowshares” (Isaiah 2:4).

Because the true end of all war – the wielding of the sword – is peace, a wise man must also learn to live peacefully and prudently in the domain of his vocation with the joy that comes from knowing you possess good things.  “Blessed is the man that fears the Lord, that walks in His ways… for he shall eat the labors of his hands” (Psalm 128).  A matured man, even and especially in times of chaos and disorder, regains peace in the spade, as Odysseus found his father toward the end of The Odyssey as peace and order were being restored:

Odysseus found his father in solitude

spading the earth around a young fruit tree.

On the other end of a sword is an enemy, but on the other ends of a spade is life that must be cherished and worked wisely.  A farmer’s work is very different from a soldier’s.  He does not cut down but prunes.  He does not trample but cultivates.  He takes no spoils but sows the seeds.  He, therefore, must study and understand his surroundings so that his actions help his soil to bear more fruit than it would have without him.  This is a humble act that submits implicitly to God, because by seeing and respecting the created nature of a thing you respect the thing’s Creator.

S&S is compiled and edited in such a way to be accessible to the average man – lay and cleric – yet should also stretch the intellect, soul, will, and imagination.  Contributions from and writing toward the priestly vocation is included, but there is an intentional focus on the paternal life of man more broadly, meaning the natural foundation of biological fatherhood is a main focus.

The format is a quarterly periodical.  The main feature is an editorial that presents a well-researched and presented topic or thesis that is pertinent to the target audience of Catholic men that are in an essentially paternal role – giving life as only a father can.  There are then “responses” to that article from guest contributors.  The responses offer further reflection styled in narrative and exemplar fashion by the author, giving details detail and insight to specific states in the lives of men.

For example, if the issue is on mentoring, the editorial provides cogent and illuminating explanations of mentoring and the responses could provide a narrative about the power of mentoring, practical advise from a teacher or coach, and a priests insights into guidance in spiritual matters.

Along with the rotating focuses, S&S will have regular features that will help men both respond to the assaults on truth in their contexts as men, and guide them toward further study through book reviews and suggestions.  Again, the goal is to get men reading, studying, reflecting, praying, and seeing reality accurately and responding to it virtuously.

Why Print, Not Digital

Q: In a world of rapidly propagating means to deliver content digitally, why “regress” to print?

A: While it is true that the Internet and other media are efficient in moving information, they have not proven to be places of deep reading and reflecting.  The very place of consumption – the screen – can be a place that is inherently distracting and too fast-paced to settle a man’s mind into higher thought and self-examination.  The habit of the screen is to bounce from thing to thing, not dwell on the truly worthwhile.  Good reading causes man to stop and think.  “’Good’ browsing” causes man to go faster and not think.  Even the best of content is crowded by ads and consumerism, and, therefore, so are the ideas themselves.

Therefore, the act of reading S&S is not only receiving information that is helpful, but in developing the very habits necessary for wisdom.  Reading itself is an image of active receptivity (along with listening, praying, and seeing).  Active receptivity is the posture of a son of God.  Digital media can be effective and useful, but it remains a form of noise inwardly.  A print publication, like a sword or spade, is an effective tool in the hands of a man and in and of itself is an act of discipline (teaching).

“There is a great deal of difference between an eager man who wants to read a book and the tired man who wants a book to read.”  – G.K. Chesterton

An Added Benefit of the Subscription

Along with the value of the content and its format, subscriptions to Sword and Spade also support Fraternus, a fraternal organization that has been effectively mentoring boys into virtuous Catholic men for over a decade.  Not only has Fraternus seen numerous vocations come from it, but it has effectively united men in a fraternal mission that has intergenerational impact.  Your subscription is good for you, and good for many other men and boys.

Ready to stop the plunder that’s going on because Catholic men are asleep in their minds and wills?  Subscribe today to Sword and Spade.

Is There a Civil War Within the Catholic Church?