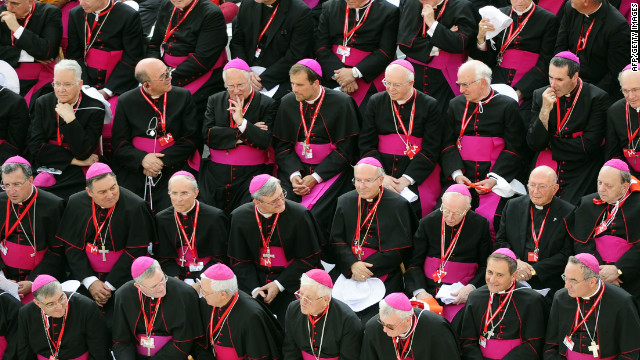 By now there is likely not a man unaware of the news about the sins and cover-ups committed by the clergy and, perhaps more startlingly, the episcopate.  And, we’ve learned that this scandal not only reaches the top of the hierarchy of the Church, but the root might even be up there.

And let’s not just call this news “sad” or “scandalizing.”  It’s more than that.  It is a violation of trust so significant as to have cost a divinely instituted office its trustworthiness (good job, guys).  I’m not sure it has sunk into some mitered heads how much of a shift just occurred.  We men are done.  The institutional strength of the American Bishops is gone, and only those that have their eyes open will see the new reality that they need to face as men, which, it seems, will be the biggest challenge.

This all seems so far away, but just recently someone reminded me of how a priest who passed by my little town at one time had tried to blow the whistle on the predator McCarrick (after suffering his own abuse at his hands, later to repeat McCarrick’s sins with other victims) and got silenced.  We may be a global Church, but by sharing communion and connecting dots we’re usually just a few steps away from the Pope himself, and perverts.

The man in the pews typically asks the most basic and obvious question: how did this happen?  There have been many great answers.  Here are some…

First, Dr. Greggory Bottaro, a Catholic psychologist, has pointed out (along with many others) that the whole thing links clearly to the Sexual-Revolution Kool-Aid that many bishops and clergy consumed, especially in their rejection of Human Vitae, Pope Paul VI’s prophetic affirmation of truth in the face of the pressure of modern “experts” to match the natural law with the “advances” of progressive society:

Yes, we need to call it evil, because it is, but in our epoch of church history evil has taken a particular form.  Humanae Vitae represented the major split in the priesthood between those who understood the battle of our times and those who didn’t. This divide was severe and long-lasting.

Second, a broader problem wad expounded by a post on One Peter Five about the elephant in the room – apostasy, the abandonment of Catholic doctrine.  It is apparent that we want Jesus without hell and grace without sacrifice.  Catholicism is a total package, and those that split off internally, especially regarding the faultline of Humanae Vitae, are also the ones that have been pushing Catholicism toward an unimposing and nice NGO dedicated to being the best you can be, social activist, or some other crap like that:

The ring of criminal Nancy Boys is the same ring that has been sedulously working for decades to undermine the integrity of the doctrinal, moral, sacramental, liturgical Church. These men – McCarrick, McElroy, Wuerl, O’Malley, Mahony, Cupich, Tobin, Farrell, Lynch, Weakland, Paglia, Maradiaga, their lovable mouthpiece James Martin, Thomas Rosica, and far too many others, including ones who have passed on to their eternal fate, such as Lyons, Boland, Brom – are the same ones who have destabilized and adulterated catechesis, theology, liturgy, and most obviously the Church’s commitment to the unchanging moral law, as we saw in the Amoris Laetitia debacle and all that surrounded and succeeded it. We must connect the dots… These are not just men of bad moral character; they are apostates, and they are trying to remake the Church in the image of their own apostasy…

Third, Fr. Jay Scott Newman wrote an excellent piece in First Things about the need to end the “imperial” attitude of Bishops which trains them to think as a ruler of Laputa from Gulliver’s Travels.  “Superficial flattery and fawning over the person of the bishop can deprive him—unless he has an uncommonly strong and healthy personality—of the evangelical simplicity and candor he needs to fulfill his duties.”  Newman says this is opposed to the fatherly role of a bishop and thinks we need to rethink the very way we approach bishops:

“In Christ Jesus I became your father through the Gospel,” wrote Saint Paul to the Corinthians, and from antiquity bishops and priests alike were called “Father.” The bishops of all the ecumenical councils are known as the Council Fathers, the early bishop-theologians are called the Fathers of the Church, and to this day the Bishop of Rome has Father as his formal and everyday title. It is time to restore the practice of calling all bishops Father, while letting all the other titles slip into history along with ostrich feathers and buskins.

Fourth, Taylor Marshall has made a good case that the sheer size of today’s dioceses in the US makes it impossible for a bishop to be fatherly because he’s managing the unmanageable:

What we have created over the last 150 years (since the loss of the Papal States, really) is an insanely high disciple/bishop ratio with regard to bishops. Bishops belong to the magisterium in union with the Pope. Magister is Latin for teacher. The bishop is the primary teacher. So we are discussing a student/teacher ratio here, as well. As the disciple/bishop ratio increases, what do we see? Lay people know their faith less (akin to lower scores), and they drop out at higher numbers (leave the church).

Marshall also made a great video detailing how all of this is likely linked to the embezzlement and financial scandals of the Vatican Bank, the resignation of Pope Benedict XVI, and the ninnies that make up much of the Curia.

So, again, what does the red-blooded male think?  Well, I can say that I was fooled – I thought the Church was being run by men.  It’s not.  The males who have violated our trust have acted largely at best as a managerial class of bureaucrats, and at worst they are scoundrels and cowards.  Yes, him without sin can cast the first stone, but what we’re judging here is the exercise of fatherhood, which is the maturity of manliness and shows itself in provision and protection.  Managers and bureaucrats are not paternal.  In fact, acting as such, because it distances leadership from actual individuals and responsibility (i.e. from the care of children), is opposed to the fatherly spirit and manly virtues in general.  Some bishops sent links out to statements from the USCCB.  I deleted one such email immediately because I don’t want to hear a damn word from the USCCB.  That ship sailed (and sank).  Men in this moment do not want documents, media statements, or committees.  Bishop Morlino has written the only response that I’ve seen that appears to be written by a man, by a father that is.  That’s what men are looking for – men acting like fathers.

Fathers will no longer stand for the soft and wimpy Church.  We’re going to be heard in voice, step, and wallet.  I recommend all men stop going to goofy modernist parishes and drive as long needed to find Catholicism in all its splendor.  Don’t send another dime to failing institutions and bureaucracies.  Swamps can be drained, but that’s hard.  It’s easier to dry them up by diverting the water.  That’s what we’re going to do.  (Here’s a good article about discerning and speaking with your giving.  Remember, giving is not optional, but its time to be more intentional.)

Fatherliness is a lost sense in the Church because too many operate in a triangle of influence that is antithetical to fatherliness.  That triangle is academia, liability (the lawyers), and the media.  The academic attitude keeps “experts” around long after they empty the churches and corrupt the seminaries; the lawyers protect the purse and the perverts; and the media teaches bishops to speak like, well, they’re talking to the press and not to their flocks.  Each of those things may be needed, but they inform a father toward action.  They don’t dictate them.  The average Joe layman is not in that triangle. He loathes it.

Priests in the trenches need not worry – we know what fighting looks like, and if you fight the good fight we’re alongside you and you us.  We are brothers.  We know you as fathers and for good reason.  Do not mistake our new zeal for anti-clericalism, that would be silly and reveal insecurity.  Be sure of who you are and don’t be scared of those that trust you.  But, these males that are failing to live up to the honor of fatherhood need to spend more time with lay fathers. Doing so will help forge them in the attitude and habit of mind necessary to be fatherly – discerning what is needed to protect and provide for your family and defending them from harm.  Such mentoring does not seem to be widespread in the ecclesial world.  Fathers keep their children’s welfare in mind, so are unlikely to move a rapist from the living room to the kitchen.  That’s the action of institutional protection, not fatherliness.  Fathers also don’t feed their children sugar and Ramen noodles and expect them to be strong.

It’s time for our all-male priesthood and episcopate to become an all-man institution.  It’s time to grow up and do what needs to be done.  A fatherly bishop knows he answers to God and he has a family to provide for and protect.  He’s not a company man, but a man.  So, get out of the dead triangle and spend some time with men.  Men will follow men.

bishopsfathersusccb
09 25 2018
Back to all articles