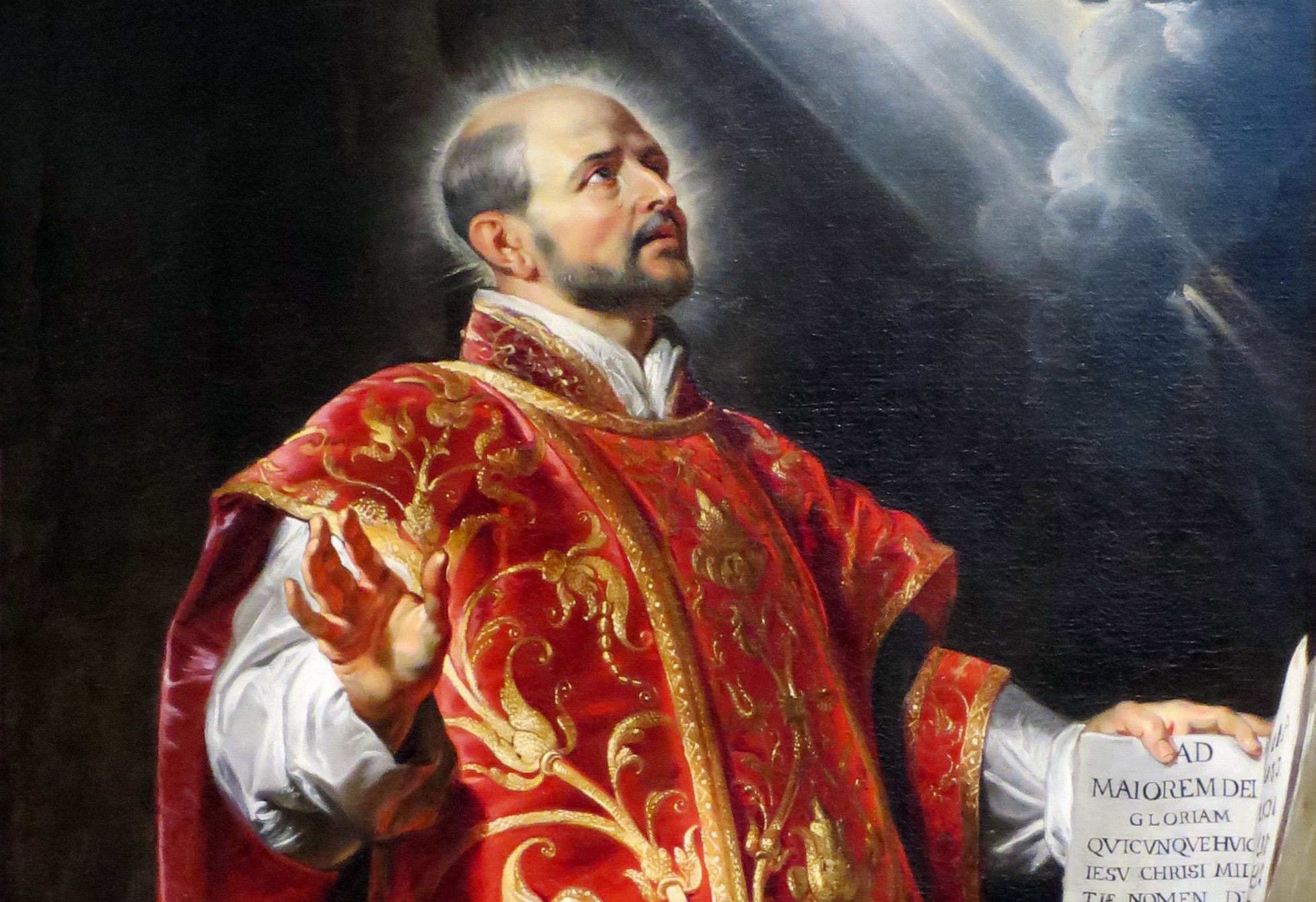 The Jesuits, perhaps especially now through the Pontificate of Pope Francis, have been controversial in the last generation or so.  But their original charisms are filled with undeniable wisdom confirmed with amazing fruitfulness, especially for us men.  The Catechism says charisms, both great and small, “are graces of the Holy Spirit which directly or indirectly benefit the Church, ordered as they are to her building up, to the good of men, and to the needs of the world” (CCC 799). In sum then, charisms are gifts of the Holy Spirit to build up the Church for the good of the world, but what are the charisms, gifts and graces of the Jesuits and how can they help us today?

The Jesuits take a vow of obedience not only to their superiors, but also directly to the Pope. These days, most people struggle with obeying anyone but themselves. As Catholics, we should set an example of obedience. That means obeying our Pope, our pastor, our spouse and others, not only out of respect for authority, but also out of love. Obedience and fraternal correction are not mutually exclusive, so being obedient does not mean being ineffective or weak. Jesus was obedient to the Father (Lk 22:42). Jesus was obedient to the Blessed Mother (Jn 2:1-12). Jesus even obeyed the secular authorities (Mk 12:17) and told his people to obey the Jewish authorities (Mt 23:3). Jesus was not weak for practicing obedience, and neither will you be.

The Jesuits are missionaries. They work in the world while remaining indifferent to it’s temptations (or at least that is the goal). Pope Francis has said priests should smell like their flocks and he has told young people to go out and make a mess of things. These statements reflect the missionary spirit of the Jesuits. Like them, all Catholics must have a healthy and adventurous missionary spirit. If we want to love and convert the world, then we need to understand it and interact with it and the only way to do that is to be on mission deeply within it.

The saints often say if you are not growing in your spirituality, then you are regressing. There is no neutral ground. Ignatius developed the Spiritual Exercises as an intensive month-long retreat for people to grow in their relationship with Jesus. Weekly Mass and daily prayer are great. However, if you’re not seriously challenging yourself in some way with programs like The Spiritual Exercises or Exodus 90, then you’re probably regressing, or, at best, you’re in a state of flux, regressing some and progressing some, without ever making any real net gains. We must be challenged regularly. We must exercise our spiritual muscles. No pain, no gain.

St Ignatius was a soldier before he was a priest. Soldiers must be adaptable to survive. The heart of Ignatian spirituality is The Spiritual Exercises, a month-long intensive retreat which is meant to take place at a monastery. Ignatius quickly realized, however, that The Spiritual Exercises could not be completed by most people who are unable to abandon their life obligations to spend an entire month at a monastery, so he did what any good soldier would do. He adapted The Spiritual Exercises making them into what is called a 19th Annotation retreat. A 19th Annotation retreat is an “at home” retreat that does not require the participant to go to a monastery for a month. Instead the participant goes on a metaphorical “retreat” each day within the realities of his or her own life through reflection, prayer, meditation and Scripture. We Catholics must be like soldiers. We must adapt to survive on the cosmic battlefield.

People make terrible decisions. Just spend fifteen minutes watching or reading the news and you will see what I mean. Some of us live in a kind of intellectual and moral stupor. Others are overwhelmed by the complexity of daily life. All of us need a way to make prayerful decisions guided by the Holy Spirit. Ignatius understood that God speaks to us in our desires, consolations (joy or peace) and desolations (fear or disquiet). He developed The Discernment of Spirits to help people make good decisions in accord with God’s will. If you’re not familiar with The Discernment of Spirits, you should study it. Ignatius’ original rules were written almost 500 years ago, so they may be difficult for today’s readers to digest, but there are plenty of modern books that discuss The Discernment of Spirits using contemporary language. Catholics must always be prayerful and discerning in their decisions.

When people think about contemplation, they may imagine monks praying in silence in an old chapel behind the walls of some remote monastery, but Ignatius taught the Jesuits to be contemplatives in action. Active contemplation means not only contemplating God in silence before the Blessed Sacrament, but also contemplating God by recognizing him all around us in our active lives – in people, art and nature – in all the good, true and beautiful things we encounter every day. Most Catholics cannot lock themselves within a monastery to pray in silence for the rest of their lives, but most of us can and must learn to become contemplatives in action by making the world our monastery, i.e., by being constantly aware of God’s presence all around us.

Ignatius would probably have agreed with Socrates when he said, “The unexamined life is not worth living.” Ignatius made The Examen an important part of Ignatian spirituality. The Examen can be done in varying ways, but the basic steps provided by Ignatius are: (i) gratitude; (ii) ask for the grace to know your sins; (iii) review your day; (iv) ask for forgiveness; and (v) ask for grace for tomorrow, followed by a prayer such as the Lord’s Prayer. The Examen is meant to be be done at least once per day, usually in the evening, but it can be done in the morning and even more than once per day. When we engage in the Examen, it is easier to see God working in our life and we gain a better understanding of our life story. Catholics must prayerfully examine their lives on a regular basis to understand where they have been, where they are and where they are headed.

Before his conversion, Ignatius enjoyed reading tales of chivalry and romance. He imagined becoming a famous soldier and marrying a beautiful noblewoman. Basically, Ignatius wanted to be a hero, a hero by worldly standards. While he was recovering from a severe leg wound he suffered at a battle against the French at Pamplona, Ignatius read books about the lives of the saints and the life of Jesus. He was captivated by their stories. Ignatius continued to desire heroism after his conversion, but no longer worldly heroism. After reading about Jesus and the saints, Ignatius wanted to become a hero of virtue. A saint. He wanted to do greater penances and works than St Francis of Assisi and St Dominic. And he believed he could do it. This aspect of Ignatius’ personality is so rich with meaning for us, but what is most important for today’s Catholics to understand is, not only should all of us long to be great saints, but we must believe it is possible, for anything is possible by the grace of God.

Fear in their hearts

Since their establishment almost 500 years ago, the Jesuits have built communities and founded schools all over the world, engaged in work to help the poor, acted as trusted advisors to powerful leaders and more. Notwithstanding all of the good they have done, the Jesuits elicit strong reactions from their adversaries. I find this to be very telling, what a soldier might call valuable “intelligence.”

Following the suppression of their order and the lifting of the same by the Church, our second president, John Adams, said of the Jesuits:

“I do not like the reappearance of the Jesuits…. Shall we not have regular swarms of them here, in as many disguises as only a king of the gipsies can assume, dressed as printers, publishers, writers and schoolmasters? If ever there was a body of men who merited damnation on earth and in Hell, it is this society of Loyola’s. Nevertheless, we are compelled by our system of religious toleration to offer them an asylum.”

“This society [Jesuits] has been a greater calamity to mankind than the French Revolution, or Napoleon’s despotism or ideology. It has obstructed the progress of reformation and the improvement of the human mind in society much longer and more fatally.”

“What could be invented to debase the ancient Christianism which Greeks, Romans, Hebrews and Christian factions, above all the Catholics, have not fraudulently imposed upon the public?”

“Can a free government possibly exist with the Roman Catholic religion?”

These are the words of one man, John Adams, but they reflect a prevailing mindset of more than just one of the “enlightened” and “free-thinkers” who founded or profited from this country and of many people today. I see these statements as a kind of badge of honor for the Jesuits. People hate them not because they are simply Jesuits, but because of their successful work for the Church (which is, perhaps, too often contrary to the world’s goals) and their loyalty to the pope. Any Catholic individual or group who strikes fear into the hearts of the Church’s enemies, whether they hail from the world of politics or business or they simply make a habit of slandering or oppressing the Church, are friends of mine.

Pope Francis is about more than just one man. When we look at his Pontificate from a Jesuit perspective, we discover a map that provides us with clues to navigate the spiritual journey. God often works in paradox. Pope Francis may be the pastoral Pope of love and mercy, but he is also a Jesuit. A soldier for Christ, a contemplative in action. Perhaps we are being called to live an Ignatian paradox ourselves, to be missionaries in our home parish; to go on retreat at home; to spend finite time exercising our eternal soul; to immerse ourselves in the world, yet remain unattached to it; to be merciful soldiers.