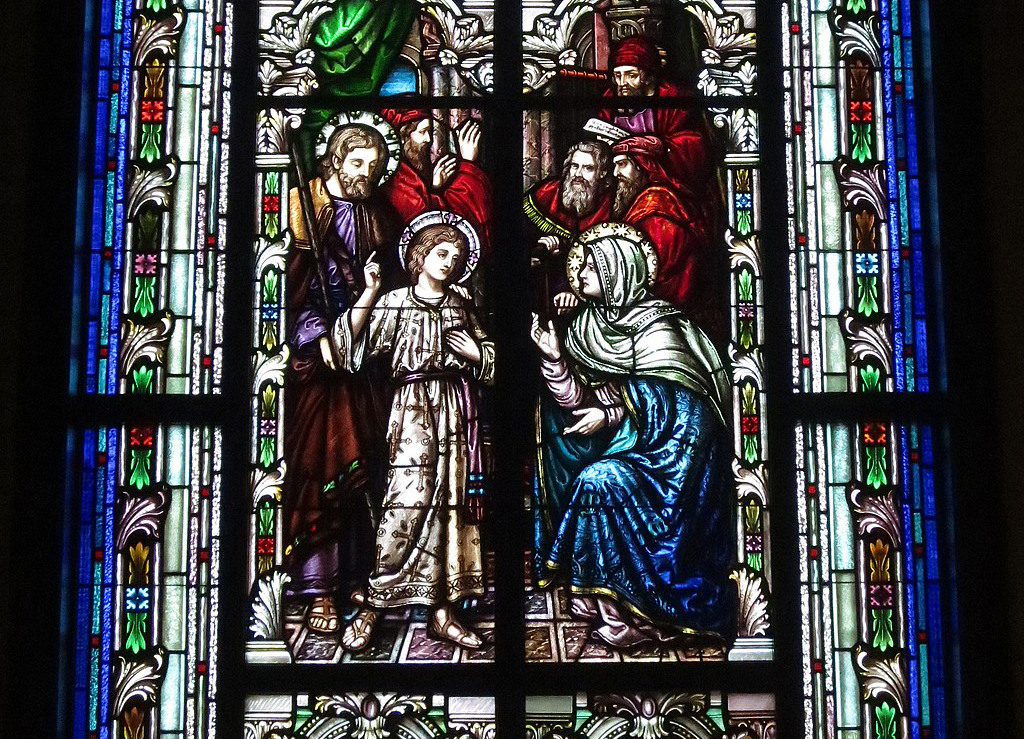 The following is an adapted excerpt from Leaving Boyhood Behind by Jason Craig.

Jesus went through the stages of a rite of passage, as the Gospel of Luke – the Gospel that gives the most details of Jesus’ childhood – describes. The story of the boy Jesus in the Temple in particular shows that Jesus had to transition away from boyhood into the mission of his manhood.

The Temple event occurs when Jesus is twelve, the traditional age of initiation. His family is going on pilgrimage to Jerusalem, and at some point during the trip, Jesus is separated from Mary and Joseph. After they realize it, they search for him for three days, finally finding him in the Temple with the Jewish men who teach there.

Jesus is not sinfully rebelling against Mary and Joseph by remaining behind in Jerusalem. But he is telling them something: things are different now. He has a mission outside of them and their direct care. The same is true for all men in relation to their parents, and part of a rite of passage is that both the parents and the child accept that truth.

Before looking at that, let’s note that Jesus is separated from his mother for three days. “Three” in Scripture is synonymous with a period of death, as in the case of Jonah and Christ: “For as Jonah was three days and three nights in the belly of the whale, so will the Son of man be three days and three nights in the heart of the earth”(Mt 12:40). Saint Thomas Aquinas also speaks of three being a symbol of completion and perfection.   We can see this moment, then, as both the end of something and the bringing to perfection of something. What was ending was the infancy/childhood of Jesus, and what was being born was his mission as a man. We know the incident comes after Jesus’ boyhood/infancy narrative is over, because Luke ended Jesus’ infancy – just before the loss in the Temple – in the same way he “ended” the infancy narrative of Saint John the Baptist:

This is important because almost all ancient rites of passage communicated that a boy was dying in order to be reborn into a man. Jesus is lost three days in Jerusalem, the same place where he will be condemned to death two decades later. Many traditional devotions dwell on this moment of grave sorrow for Mary. She knows Jesus is destined to suffer and fears the moment has come for him to be taken from her. While Jesus is very much alive when they find him, the boy Jesus is no longer there. Something has changed about him, and they see it when they find him:

They found him in the temple, sitting among the teachers, listening to them and asking those questions; and all who heard him were amazed at his understanding and his answers. And when they saw him they were astonished; and his mother said to him, “Son, why have you treated us so? Behold, your father and I have been looking for you anxiously:” And he said to them, “How is it that you sought me? Did you not know that I must be in my Father’s house?” (Lk 2:46-49)

Jesus is with the men, “sitting among the teachers:‘ He is listening to them, yes, but also “asking them questions;” which is a form of teaching. He is not just there as a student but also as one of the men incorporated with them. Jesus is allowed to speak, ask, and answer questions among the men of the Temple. Amazed at his answers and understanding, they recognize that this is no ordinary boy; he is not a boy at all! His parents, seeing this, are “full of wonder;” they, too, recognize that something is different. Note as well that the first words of Jesus, his first independent and public act in Luke, vocalize his dedication to the Father’s will.

This story of the child Jesus in the Temple is important because it is not so much about Jesus’ childhood but about his transition out of childhood and the mission that will eventually be associated with his manhood. Luke seems to be telling us that the boy Jesus is literally bursting with the desire to become more than a boy. After the Holy Family returns to Jerusalem, Luke tells us that “Jesus increased in wisdom and in stature, and in favor with God and man”(Lk 2:52).

The finding in the Temple was not merely a random event or nice story in Jesus’ life. There is a reason Luke places it between his infancy and the beginning of his adult ministry. Like boys all over the world and throughout time, Jesus at twelve years old had an experience that was integral to his initiation into manhood .This event marked his leaving infancy and boyhood behind and entering into his growth toward a full manhood. As he expressed to his parents, he was now oriented toward something beyond himself. It was his rite of passage. Luke is clear on this. Take special note of the opening verse of this event and then the closing verse:

Up until this point in the Gospel of Luke, Jesus is always called a boy or a child, but after the finding in the Temple, this is dropped. Luke is revealing to us the change in Jesus, a change recognized by Mary and Joseph.  It is a change we too often fail to see today, let alone encourage and direct.

To learn about the course and book on rites of passage by Jason Craig, visit www.leavingboyhoodbehind.com.

A Real Picture of Loving in Sickness and in Health