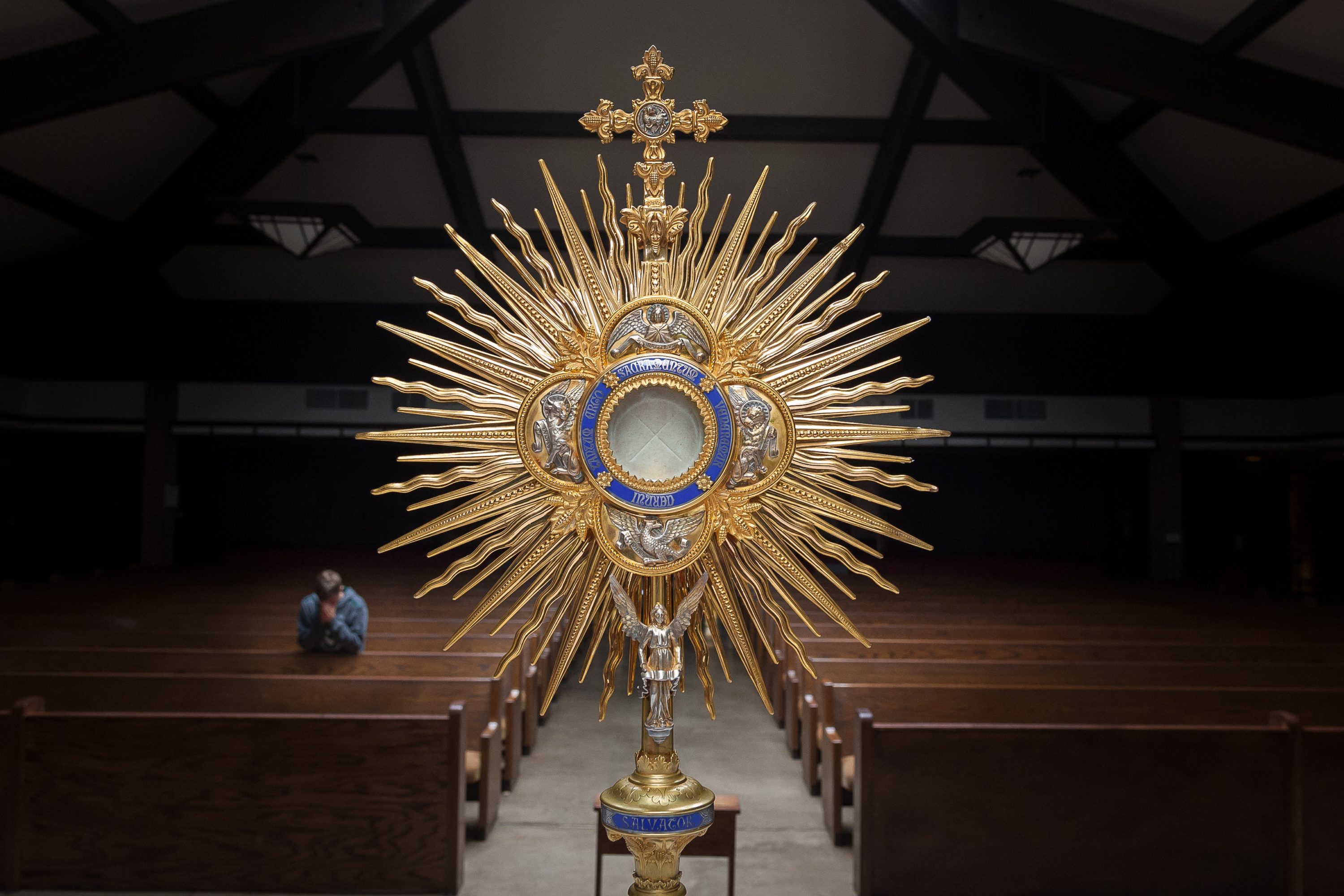 Catholics receive the Eucharist regularly, but we do not focus our attention on preparing to receive Christ worthily and fruitfully in the sacrament. The danger is complacency and allowing obstacles to creep in that block the graces of the Eucharist from taking root in us.

In the early Church, Christians received the Eucharist frequently, as we can see even in Acts: “And day by day, attending the temple together and breaking bread in their homes, they partook of food with glad and generous hearts” (2:46). By the time of the Middle Ages, however, it became the norm to receive Communion once a year. Eamon Duffy notes in his monumental work, The Stripping of the Altars, that when the first Protestant Archbishop of Canterbury, Thomas Cranmer, enforced the practice that one person must receive Communion at each service with the priest, parishioners paid someone else to receive in their place so as not to contravene the traditional practice. To them, the Protestant push for frequent communion was a sacrilege by not taking seriously the Real Presence of Christ.

We know, rather, that frequent Communion is a good practice, but we can also ask if there was any benefit to receiving Communion less frequently. Just as those medieval Christians feared, we also can stop taking the Real Presence seriously, as we fall into routine and complacency. Even if once a year is not enough, which the Council of Trent stated to be the case, medieval Christians are still a witness for realizing the gravity of communion. One aspect of their preparation was to go to Confession immediately before receiving the Eucharist.

Pope Pius X, in particular, was the champion of frequent communion, issuing Sacra Tridentina to encourage it in 1905. He makes an overwhelming case for the importance of frequent Communion, with which I wholeheartedly agree, but there’s another part to his teaching that needs emphasis—having the proper intention. “A right intention consists in this: that he who approaches the Holy Table should do so, not out of routine, or vain glory, or human respect, but that he wish to please God, to be more closely united with Him by charity, and to have recourse to this divine remedy for his weakness and defects.” I would also recommend taking a look at chapters 20-21 of the second part of St. Francis de Sale’s Introduction to the Devout Life, which speak of frequent communion and how to prepare for it, especially by breaking any attachment to sin.

Instead of fostering a right intention and removing obstacles, I think we have fallen into a routine reception of Communion. I have never heard a priest caution anyone from receiving the Eucharist, even though St. Paul warns us in First Corinthians 11:

Whoever, therefore, eats the bread or drinks the cup of the Lord in an unworthy manner will be guilty of profaning the body and blood of the Lord. Let a man examine himself, and so eat of the bread and drink of the cup. For any one who eats and drinks without discerning the body eats and drinks judgment upon himself. That is why many of you are weak and ill, and some have died (vv 27-30).

I think it is safe to say that we are experiencing spiritual weakness at least, which may be flowing from a lack of preparation before receiving Christ’s Body and Blood.

Pius X gives some practical advice on this topic of preparation: “Since, however, the Sacraments of the New Law, though they produce their effect ex opere operato, nevertheless, produce a great effect in proportion as the dispositions of the recipient are better, therefore, one should take care that Holy Communion be preceded by careful preparation, and followed by an appropriate thanksgiving, according to each one’s strength, circumstances and duties.” I’ll unpack this a little more with the following suggestions:

First, to approach Christ in the Eucharist we must have faith in His true presence. To receive without belief is the ultimate sacrilege and prevents us from recognizing and receiving the grace Christ wants to give us. Unfortunately, many polls have shown that a large number of Catholics who attend Mass do not believe in the Real Presence.

2. You need to confess before receiving.

The Church requires us to go to Confession at least once a year, but we are prohibited from receiving Communion in a state of mortal sin. If we do so, we commit another grave sin. Beyond that, we need to confess more regularly to break sinful habits and our attachment even to venial sin (as St. Francis de Sales recommends). Part of the problem here is that parishes need to make Confession more available, especially on Sunday when people are already at church.

We should make a deliberate choice to receive Jesus in the Eucharist, breaking out of any routine complacency. Although it is good to receive Communion frequently, it can be helpful to remember that we are only required to receive once a year. If we are not properly prepared or need to go to Confession, it may be better to wait to receive.  Sometimes the waiting can increase our “appetite” for this Divine Gift, and break the cycle of complacency.

If we do make the choice to receive the Eucharist, we should prepare through prayer and removing ourselves from distractions. Saturday traditionally has been a day of preparation for the Lord’s Day and it would help to say some extra prayers and to avoid things that would pull our mind and heart away from Christ. We should pray for the grace to make a good Communion when we wake up the day we are going to Mass and should say a prayer before Mass. There are beautiful prayers written to help us prepare to receive, such as the prayers of St. Ambrose and St. Thomas Aquinas found in most traditional prayer books.

We should follow up from receiving our Lord by staying recollected after Communion and making a thanksgiving right after Mass. There are also beautiful prayers written for after Mass. We should try to keep the Lord’s presence in us by continuing to pray throughout the day and making a spiritual communion on other days throughout the week.  In this way we are living the teaching of the Church that the Christian life comes from and is oriented toward the Holy Eucharist.

Jesus offers us the greatest gift imaginable by entering into us with His Body, Blood, Soul, and Divinity. We need to make sure we are not taking this gift for granted or even putting up obstacles to it in our life. Making a conscious effort to receive Jesus worthily will make an enormous difference in our spiritual lives and will bring us into a deeper communion with Him.

eucharistintentionalpreparationsinworthy
09 / 27 / 2017
Back to all articles

The Desert Fathers and the Dessert Father: A Contemplative Retrospective