How Mary Can Form You to Be a Man… 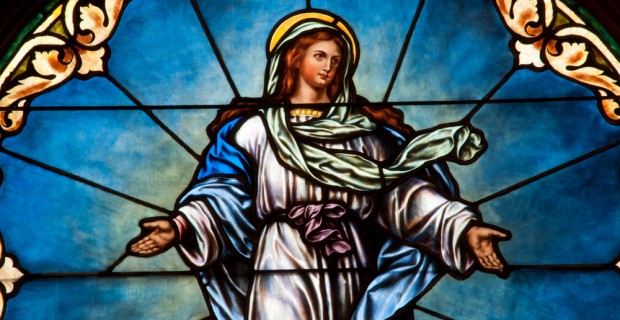 If you’re like me, you are 5’10” and when you think about the Holy Family you think:  Maybe this wasn’t a good use of resources to put all this goodness in one spot.  I mean, if I were God, I would have spread the wealth a little…maybe send Mother Mary to help a Bulgarian family during the 19th century Crimean War.  Yes, and maybe I would have sent St. Joseph to help shape up some trailer park community in Florida in 1985.

I discovered that the first reason that I would be wrong is because the New Ark of the Covenant (Mary) needed to be as pure as the gifts carried within (the New Manna, the New Bread from Heaven, Jesus Christ.)  They had to come together.  Although I believe Mary’s sinlessness and Immaculate Conception can be proven Scripturally by a Greek study of Luke 1:28, I want to put Scriptural proof texting aside and just talk common sense:  If you were the Second Person of the Trinity and you needed a vessel through which to travel from heaven to earth, and you were omnipotent in making any person you wanted, would you make a dirty vessel or a clean vessel?  If you came through a human mother, and you could make her any way you wanted, would you give her the best intellect and will?  Just saying: if you could.  This is a topic of God’s omnipotence.

After Jesus’ birth, maybe then Mary could have gone to Babylon to teach classes on mothering or Judaism or on her son as the savior.  But God kept the family together.  Besides the importance of families staying together, there’s a theological reason why Jesus needed parents:  Even though Jesus is the Second Person of the Trinity incarnate as the God-man, He still had to grow in wisdom.  I know that “grow” is a dangerous term for me to use of the God-man.  The Catholic Church has recognized that John chapter 1 is clear:  Jesus had the beatific vision already on earth, because He always had it as God.  Thus, Jesus can’t grow in wisdom as God.  But as man, He can: “Jesus increased in wisdom and in stature, and in favor with God and man.”—Luke 2:52.

This acquired knowledge, as St. Thomas Aquinas calls it, comes from friends and family, like all of us.  But His human holiness had to be equal to His divine holiness.  This is where Mary comes in.  Besides growing in Mary’s womb and nursing at her breast, Jesus had to learn how to walk from her, learn how to clean the house by her, learn how to speak Aramaic from her, essentially—be formed into a boy by her—and finally be formed into a man by her and St. Joseph.  If Jesus had been raised by slobs, He still wouldn’t have sinned, I know.  I also know that Mary was not necessary to God per-se in His eternal Triune outpourings.  However, God willed to need a mother like Mary to teach Him all the things that a mother teaches a boy, even if He be the Ancient of Days.  He still “increased in wisdom.”  What kind of mother would be needed to teach—literally teach—the sinless Savior of the World?  She would have to be pretty special.

“For we have not a high priest who is unable to sympathize with our weaknesses, but one who in every respect has been tempted as we are, yet without sin.”—Heb 4:15.  Except for sin, Jesus lived a totally human life.  The union of Jesus’ divinity and humanity is called the hypostatic union.  This union existed with no blending or change between the two natures, but also there was no division or separation between the two natures.  This union existed in equilibrium, meaning Jesus’ humanity had to be as real as His divinity.    Wouldn’t it have been odd for His growing humanity to be out of sync with His perfect divinity?  How could His humanity have been formed in a commensurate way to His mission if Mary weren’t perfect?  Of course this doesn’t mean Mary is better or even equal to Jesus.  But it does mean Mary’s mission of forming Jesus was unique, not circumstantial.  Unless we deny that a specific Hebrew boy needs a specific mother to be a specific human being, then we have to come to the conclusion:  Mary was willed by God to form Jesus Christ.

But then on the cross, Jesus gave His own mother to the Apostle John.  Christ even says she’s John’s new “mother.”  But, all throughout John’s gospel, John calls himself “the beloved disciple,” not “John.”  Why?  So that the reader can see himself or herself as “the beloved disciple” and the full gamut of what it means to be at Christ’s beating heart, or receiving Mary as Mother next to the cross.  If this is true, and if you believe the above three paragraphs of Mary’s formation of Jesus, then you have to come to this conclusion:  Mary can form you in the same way that she formed Jesus Christ.   I know that sounds excessive, but that’s why we’ve walked so slowly and theologically through the above three paragraphs, lest we believe this to be an overdone Marian devotion.  If the above three paragraphs are true, and if on the cross Jesus really gave Mary to you as Mother, it means we arrive at a total game-changer in Christian formation:  Mary can form you in the same way that she formed the sacred humanity of Jesus Christ.  This includes knowledge of the saints, courage, magnanimity, purity, interaction with women, fortitude, kindness, patience in family life, use of gifts and talents, even prayer, joy and humor.  Really, just ask:  From whom did Jesus learn if not His mother?

If we choose to live as her adopted son like John did, then she is the one who forms us to be the strongest men and the most loving men.  We’re called to be nothing short of other Christs living in the world.  “I have been crucified with Christ; it is no longer I who live, but Christ who lives in me.”—Gal 2:20

That is why Mary is the sine-qua-non of coming to be sons of the Eternal Father.  Long before any of the books of the Bible were ever edited or produced by the Catholic Church, St. Cyprian wrote:  “You cannot have God for your Father if you do not have the Church for your mother.”   Thus, the Rosary, if prayed with love, is your entire key to becoming a virtuous man, a manly man, a holy man, a loving man.  Mary makes you become subjectively what your baptism made you objectively:  A radiant son of God drenched in joy.

If Christ willed to be actually formed on earth (not just plopping to earth like Arnold Schwarzenegger did in Terminator) but actually formed, then He would need a mother.  You have the chance to be formed by her.  Mary loves you and she knows God’s plan for your life.  We are not angels that grasp everything of the spiritual life by searing intuition.  We humans are formed bit-by-bit, meaning we still need a mother, even in the spiritual life.  This means you can indeed have your humanity and spirituality grow rapidly—not unlike like Jesus did when He was increasing in wisdom and in stature—but this grace is found only to the degree that you give yourself totally to Jesus through Mary.   What do you want to learn about this life?  Go to Mary.  She was good enough to teach Jesus.  The means to the end?  The Holy Rosary: Five decades a day to stay pure, but 20 decades a day to be a saint—seemingly the minimum for almost every modern saint I’ve read.

The Unpredictable Power of God’s Word