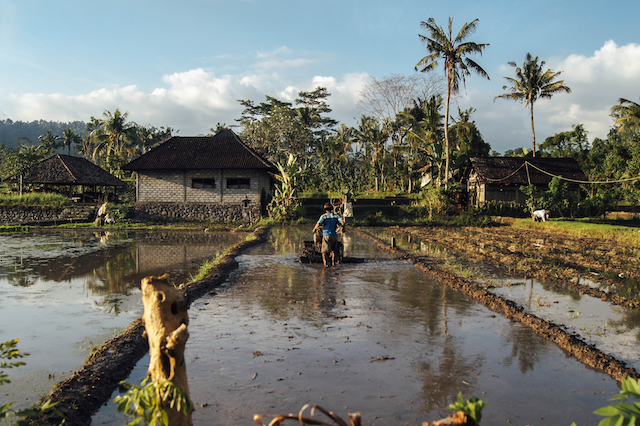 In the second creation story one of the first acts of God is to plant:

And the Lord God planted a garden in Eden, in the east; and there he put the man whom he had formed. 9 And out of the ground the Lord God made to grow every tree that is pleasant to the sight and good for food, the tree of life also in the midst of the garden, and the tree of the knowledge of good and evil (verses 8-9).

Jesus later tells us that His Father is a farmer. We are used to the translation in John 15:1, which says my Father is the “vine grower,” but the Greek is γεωργός (georgos) and the Latin is agricola. Both georgos and agricola mean farmer, not simply vine grower (as we see in Virgil’s Georgics on agriculture and the name George, which means farmer). God is the one who gives life, nourishes, tends, and brings to fruition. He is a farmer.

And that makes us… a field. St. Paul explains in First Corinthians 3: “For we are God’s fellow workers; you are God’s field, God’s building.” What God wants to grow is us! What does He want to grow in us? His life. God created our life and now recreates us into the divine nature.

We are also farmers, who like St. Paul become fellow laborers not only in the harvest of our own lives, but in others as well. Augustine unpacks this reality further. “God is a farmer, and if he abandons man, man becomes a desert. Man is also a farmer and if he leaves God, he turns himself into a desert as well” (Commentary on Psalm 145, 11). What makes it even more interesting is that Augustine says that we cultivate God as well. He says this because the Latin word for worship is colere, which also means to cultivate (and its participle is cultus, from which we derive culture and cult).

For we cultivate God, and God cultivates us. But we do not so cultivate God as to make Him any better thereby. For our cultivation is the labour of the heart, not of the hands. He cultivates us as the husbandman does his field. In then that He cultivates us, He makes us better; because so does the husbandman make his field better by cultivating it, and the very fruit He seeks in us is, that we may cultivate Him. The culture He exercises on us is, that He ceases not to root out by His Word the evil seeds from our hearts, to open our heart, as it were, by the plough of His Word, to plant the seed of His precepts, to wait for the fruit of piety. For when we have so received that culture into our heart, as to cultivate Him well, we are not ungrateful to our Husbandman, but render the fruit wherein He rejoices. And our fruit does not make Him the richer, but us the happier (Sermon 37 on the New Testament).

Aquinas refers to this passage in Augustine and explains a little more what it means to cultivate God, when commenting on John 15:

God cultivates us to make us better by his work, since he roots out the evil seeds in our hearts. As Augustine says, he opens our hearts with the plow of his words, plants the seeds of the commandments, and harvests the fruit of devotion.  But we cultivate God, not by plowing but by adoring, in order that we may be made better by him: ‘If anyone is a worshiper,’ that is, a cultivator, ‘of God and does his will, God listens to him’ (9:31).

Cultivating God, or worshipping Him, as these are the same words in Latin, means cultivating a relationship with Him, by which we give Him honor and we are ourselves are cultivated to be more like Him. The seeds of His life grow in us and blossom into the divine life.

St. Teresa of Avila has expanded on this image of the cultivation of the soul possibly more than any other spiritual writer, as she developed a whole progression of prayer based on the image of a garden. “The beginner must think of himself as of one setting out to make a garden in which the Lord is to take His delight, yet in soil most unfruitful and full of weeds. His Majesty uproots the weeds and will set good plants in their stead (Autobiography, ch. 11). It is important that God is the one who does the real gardening and we cooperate with Him. Teresa says that as we grow in prayer, God directly waters the garden with His rain, taking the place of our little buckets.

If our soul is the field or garden and we are meant to be fellow laborers, gardeners, and famers with God, what does this mean in our life concretely? I think it is not coincidental that God the farmer, when he came into the world was a builder, which we usually translate as carpenter, though the Greek and Latin are more general (faber and τέκτων both of which mean something like craftsman, artisan, or maker). God wants us to build and grow things, interiorly but also exteriorly. God is the only Creator, but He has willed that we join in the work of creation by being stewards and perfectors of creation. God wants us to exercise our own creativity in our work, taking up the fruits of creation and imprinting our personality on them (see Rerum Novarum).
In exercising our mission of dominion over creation and in the creativity of our work and art, we are imitating God the farmer.

aquinasaugustineavilafarmerGodjaredstaudt
04 28 2017
Back to all articles