Force in the New Testament 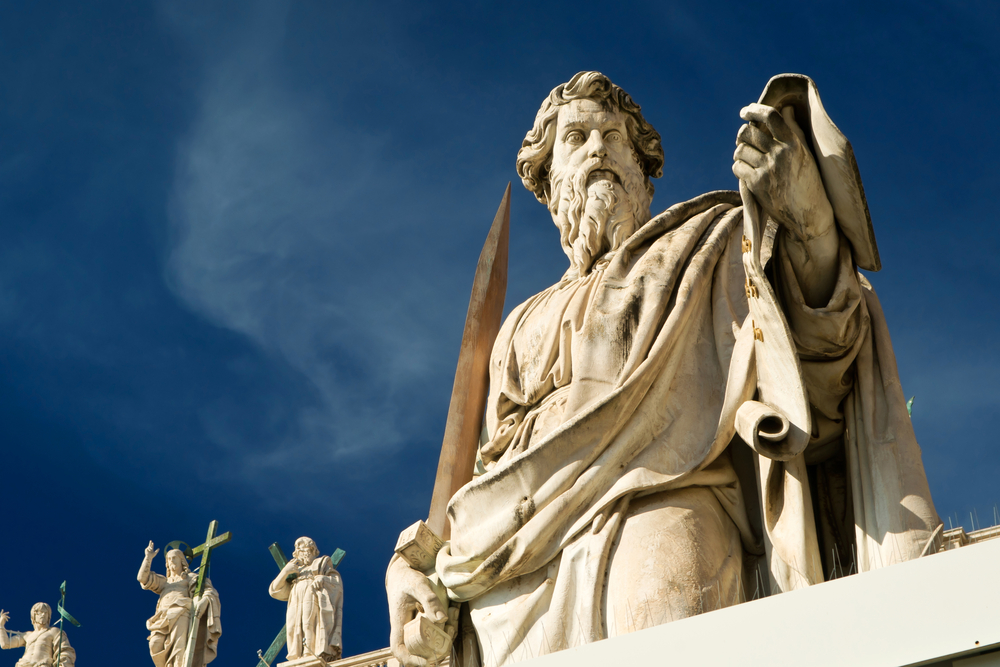 “Do not resist one who is evil. But if anyone strikes you on the right cheek, turn to him the other also” (Mt 5:39). Constantly we hear about Christ as the Prince of Peace, but how often do we hear about Him as the God of Battles? We should remember that both are titles taken from the Old Testament. Today we often experience the overemphasis that is usually placed on the pacifistic language that a partial reading of the New Testament can give. This is often in the laudable service of urging people towards unity and friendship, but risks obscuring other areas which may make some uncomfortable.

When one begins to look at what the New Testament teaches about force, the first thing one should look at is how it treats soldiers and how it treats authority. In the first place, soldiers are among the most praised categories in the gospels. Nowhere is a soldier told to abandon his post and put up his sword, rather quite the contrary. John the Baptist does not advise them to become pacifists, but to be just and to be content with their pay (Lk 3:14). St. Augustine himself comments on this passage, “If the Christian Religion forbade war altogether, those who sought salutary advice in the Gospel would rather have been counseled to cast aside their arms, and to give up soldiering altogether. . .If he commanded them to be content with their pay, he did not forbid soldiering” (Ep. ad Marcellus, 138).

Throughout the Gospels Christ encounters soldiers. He marvels at the faith of the Centurion, because of his faithful obedience, “Truly, I say to you, not even in Israel have I found such faith” (8:5). Indeed we repeat his words at every Mass, “Lord, I am not worthy…” It was a Roman soldier, known to history as St. Longinus, who made the first confession of Christ’s divinity after the Crucifixion. Indeed the only negative portrayal of soldiers in the Gospels is during the passion, but to be fair, no one comes off very well in that episode.

After the Resurrection the positive portrayal of soldiers continues. Cornelius the Centurion became the first gentile convert in the whole history of Christianity, when he sought out the Apostles to baptize his household (Acts 10:1), nowhere does it say he renounced his livelihood. The Roman army saved St. Paul from a Jewish mob in Acts 21, and then guarded him while he preached to the people. Paul uses military language constantly in describing the struggle of the Christian faith, and movingly links Christian virtues to the arms and armor of a soldier in Ephesians 6.

Both Christ and Paul bear witness to the granting of authority to civil powers. Christ tells us to render unto Caesar, a sentiment that implies that there are things which pertain to Caesar. He confirms Pilate’s authority as descending from God. Paul himself makes a spirited defense of the authority of the state to bear arms and use force in Romans 13:4, saying the prince “is God’s servant for your good. But if you do wrong, be afraid, for he does not bear the sword in vain; he is the servant of God to execute his wrath on the wrongdoer.”

Yet how many times do we hear the passage about beating swords into plowshares (a quotation from the Old Testament)? How many times do we hear “all that take the sword shall perish by the sword?” (Mt 26:51) Yet when we look at the use of “swords” in the New Testament the issue becomes far more complex. “I have come not to bring peace, but a sword” (Mt 10:34). “Let him who has no sword, let him sell his coat, and buy one” (Lk 22:36). Christ’s own followers, including Simon Peter, bear swords, and when a disciple tells Him “Lord, here are two swords,” the Lord mysteriously answers, “It is enough” (Lk 22:38).

The language of the Lord’s parables is also full of the use of force. In the parable of the wedding, the Lord orders his servants to “compel them to enter” (Lk 15:20). In Matthew’s version of the parable a guest without a wedding garment is “bound hand and foot, and cast into the outer darkness” (Mt 22:6). In yet another, the parable of the Gold Pieces (Lk 19:27), the Lord is even more direct, “But as for these enemies of mine, who did not want me to reign over them, bring them here and slay them before me.” Clearly the Lord is no stranger to the language of force.

What then shall we say of the counsel to “Turn the other cheek”? This is a counsel of heroism, a more perfect choice for an individual. Since Christ does not abolish the natural law, all men have a moral right to self defense, however the Lord shows a more perfect way, to imitate Him who was led like a lamb to the slaughter. The principle cannot however be applied to those who have the care of others, for example the father of a family, or he who has charge over a state. I cannot turn someone else’s cheek for them, I must defend those under my charge, I must morally use proportional force to repel attacks against those under my care, as is clearly shown by the example of the New Testament. For even Christ Himself used considerable force when, “making a whip of cords, he drove them all, with the sheep and oxen, out of the temple” (Jn 2:15).

We should approach the New Testament organically, Christ praises peace and love towards all men certainly, yet He also understands the moral uses of force. He teaches that, while hatred of persons is gravely sinful, hatred of sin is a requirement of the moral life, and the protection of the weak to be the paramount use of strength. We must hate with a “perfect hatred” (Ps 137:22), a hatred not for the sinner, but for the sin which offends Almighty God. Let all those who have care of communities never forget that.

This is the third part of Dr. Donald Prudlo’s series Catholics & the Use of Force. See the other installments below:

What’s The Right Amount of Sex?