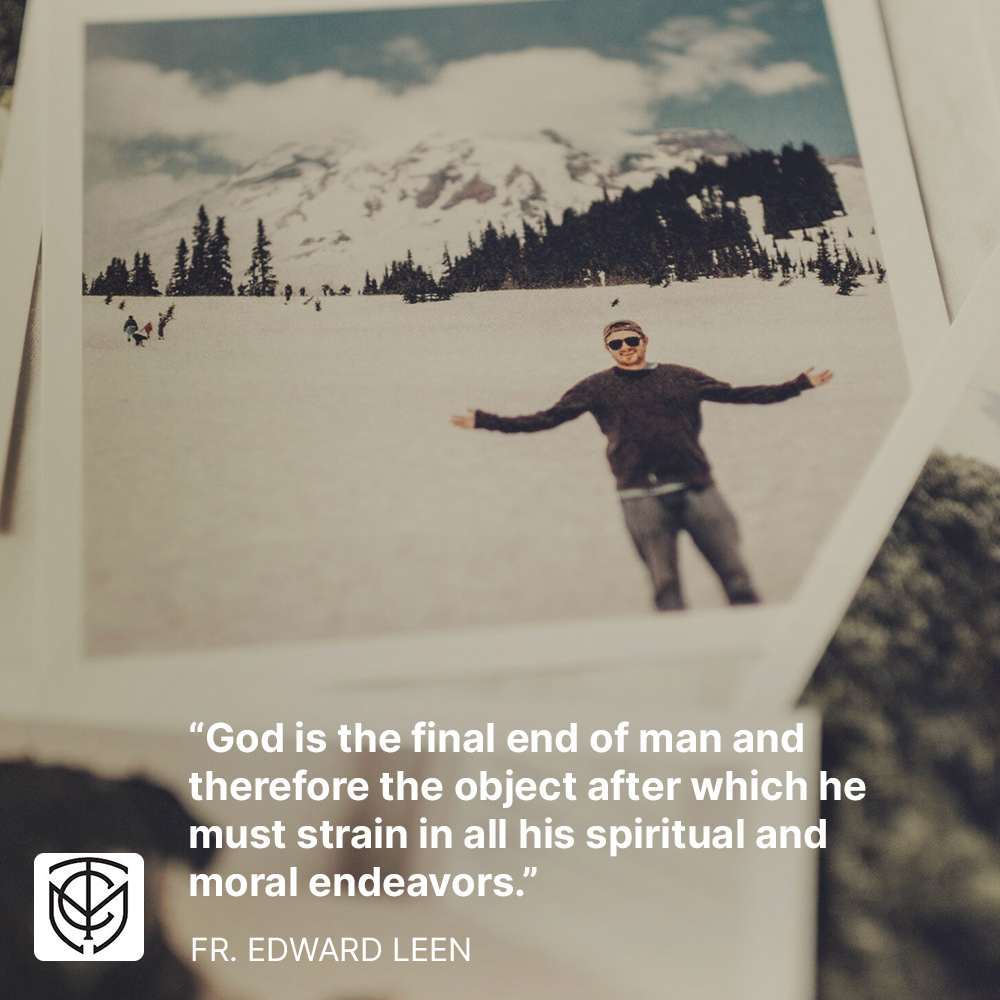 Fr. Edward Leen is too little known.  His book Progress in Mental Prayer changed my life.  If you’re sick of the current version of yourself (not progressing much at all), or not sure what version you want to be, it might be high time for the spiritual kick in the mouth that Leen starts the book with.

I have a conversion story much like others.  The cliché temptations of the devil became vices, wounds, and disorders in my life.  I encountered the Gospel and knew it to be true, I longed for the healing that Christ gave – and He gave it.  I learned this Gospel from sincere and devoted Protestants.  My life was changed.

Later I became a Catholic, because I came to see that Christ does indeed give abundantly, and one of those gifts is an infallible Church with authority and hierarchy, truth and beauty, tenderness and strength.

Like many converts, I entered into a lifelong love affair with learning about this Faith – history, customs, and teachings.  I grew deeper in appreciation for the living tradition of the Church, even if much of it has been obscured by certain modern errors.  I grew more to love the saints, scapulars, devotions, and so on.  Really, Catholicism is like an unending feast for all of the senses.

At some point these ideas, teachings, readings, and customs became an image I held – like a picture.  This is what it looks like to be a Catholic.  Then, each time I would find myself to be the same sinner I was, I was surprised and disappointed.  Progress seemed slow if present at all.

So, of course, a book like Progress through Mental Prayer seemed like a good read, and I had long suppressed the suspicion that I had purchased enough books already.  So, I bought it.  And I found this right up front:

The spiritual life is sometimes spoken of as the seeking after perfection. If this be understood to mean that the man aiming at spirituality is to set before him his own perfection as an object after which he is to strive, it is apt to lead to serious mistakes in the spiritual struggle. It is true that the development of a full spiritual life involves in its attainment man’s perfection; yet it is not precisely at this perfection that he must aim, but at God. God is the final end of man and therefore the object after which he must strain in all his spiritual and moral endeavors.

For years, little sayings and ideas had been planted within me that sounded very good and noble, but upon further reflection were something vert different from Leen’s sage advice here (which the rest of his book illuminates).

Things like, “Be the best version of you” crept in, which can be explained as “God wants you to be the best version of you,” etc.  I’m sure it’s good enough to inspire.  But dig a bit.  We know the thoughts of man, as does God, that “the thoughts of man are vain” (Psalm 94:11).  “Wow, God wants the best version of me,” we say in sincerity.  And then, because God is spirit and truth is immaterial and seeking such things can feel like looking through a glass darkly, we imagine something more tangible, a clearer picture.  Like ourselves – just holier.  Fitter even.  Probably with less drinking – and getting up early.  Yeah, that would be a good version of me.  I would like that, a better me.

And in that moment we do what Leen says we do, set before our minds eye “our own perfection as an object after which… to strive.”

Other options abound.  In our time of fragmentation, surely whatever tribe you grasp – usually through the internet – colors in between the blurred lines for you.

Jesus knows us.  He says, “follow me.”  Those little words are most powerful in how much action they can inspire in us, and how little of us there is to think about when we hear them.  It orients the eyes away from our feeble images.  It reminds us that “no eye has seen … what God has prepared for those that love Him” (1 Cor. 2:9), so why try to picture it?

God is the object of our devotion.  He is what we are after, what we love, what we seek.  And because of that, He is the reward.  He is the end of it all.  The reward is not a better us.  How disappointing that would be.  The reward is the Most High.  The road of prayer goes there, to Him, or it’s the wrong road.

Sometimes its good to remember that – whether we’re in a state of despairing over our spiritual progress or worse, gloating inward at the current version we’re sporting – “God is the final end of man and therefore the object after which he must strain in all his spiritual and moral endeavors.”