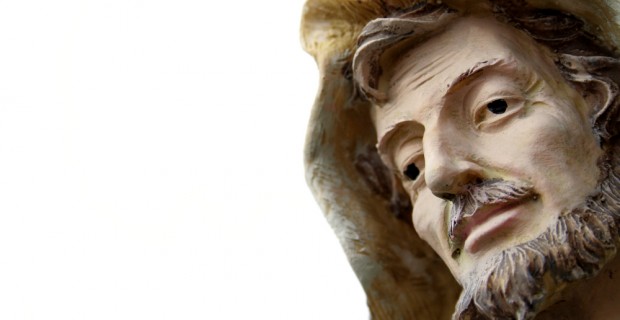 There I was sitting behind a pillar of our Cathedral in Green Bay, Wisconsin amidst a handful of my dedicated brother priests celebrating a Mass for our twenty-seven seminarians and their parents.   Our bishop was preaching and I began to tune him out thinking, “I’ve heard this one before.”  When all of a sudden I hear words piercing my heart and speaking directly to me.  The words were, “I was trying to do too much.”  After receiving communion my heart moved to a meditation on Saint Joseph.  It was appropriate with Christmas around the bend.  Saint Joseph had to really fight hard to defend Jesus and Mary.  He fought to retain Mary’s dignity and his own name in the midst of communal scrutiny and scandal at Mary’s pregnancy by the Holy Spirit.  Joseph fought to bring Mary and the vulnerable baby to Bethlehem for a dramatic birth.  In the midst of Herod’s hatred, Joseph made a leap of faith and fought to bring Mary and Jesus into the foreign land of Egypt.  Later, Joseph would fight the crowds and intensity of the Temple to present Jesus to the Lord.  Joseph was a fighter and defended the Divinity of God made manifest in Christ.  He was a fighter for the Immaculate Mother of God.  Joseph did not back down and never gave up.  These fights were very real and tangible.  The battles fought were seen and directly contended in an arena of forces that were obviously evil and insidious.   Joseph was matched to fight in a ring with an opponent that was openly trying to destroy God.

Then there is Nazareth.  What happens?

Mind you all of this was racing through my heart after communion in an instant.  Where did Joseph the fighter disappear to?  I thought the fighting was over and there was no more battle to be won.  Ah!  This was the moment of clarity in my soul.  For Joseph, the battle had just begun.  His fight had simply changed it’s front and the battlefield changed into a deeply hidden spiritual reality.  Perhaps in Nazareth, his fight was to remain and abide in the presence of God.  For a moment think about how difficult it may have been to be the only one not sharing in a sinless nature.  Talk about feeling like a third wheel!  Joseph remained in proximity to the Divine.  He literally dwelt with Mary, the sinless virgin and the Christ, the second person of the Divine Trinity; the One, the anointed.

The words “trying to do too much,” came back with the tinge of guilt due to a son who was slowly realizing that his fight had changed fronts.  For nine years my battles in priestly life were often fought to bring a ministry into being.  Now at a different time, I was thinking that there must be battles to keep fighting, almost fabricating them to fuel my own false conceptions of what “ought” to be accomplished.  Idols can be created so easily.

God was revealing a new internal spiritual fight that takes place in the depth of a masculine soul; one that transformed Joseph into the foster father to form and shape Jesus’ humanity to meet His divine nature.  By accepting his role to remain and abide IN the love of the Divine Presence, Joseph actualized the depth of the authentic masculine heart.  He dwelt with the divine love all the while fighting against the temptation to “do too much.”

Brothers in Christ, do not be duped by the lie of the evil one that your battles are to accomplish and acquire.  The battle of the man’s heart is to surrender to the truth that God WANTS you to be in His Divine Presence.  Prayer is the front.  Take your sin to Nazareth and abide with Jesus and Mary.  Learn the art of Joseph’s silence in the midst of awe for God’s love for you.  It is the place of receptivity, a shaky ground for any man whose nature seems bound to productivity and efficiency. This is the hidden and silent battleground of Nazareth.  The place of deep interior union with Joseph and Mary.  It is the true heart of a man whose identity does not come from what he does but who He is — a brother of Joseph, an adopted Son of God, and protector of Mary.  Do not try to do too much.  I had begun to turn a corner behind a pillar in my priestly life.  Now, I just want to to be with Joseph in Nazareth with Jesus whom I love.  Everything else is what God will do.  Apart from you Lord, I want nothing.

A Sense of Wonder: A Glimpse Beyond the Material World